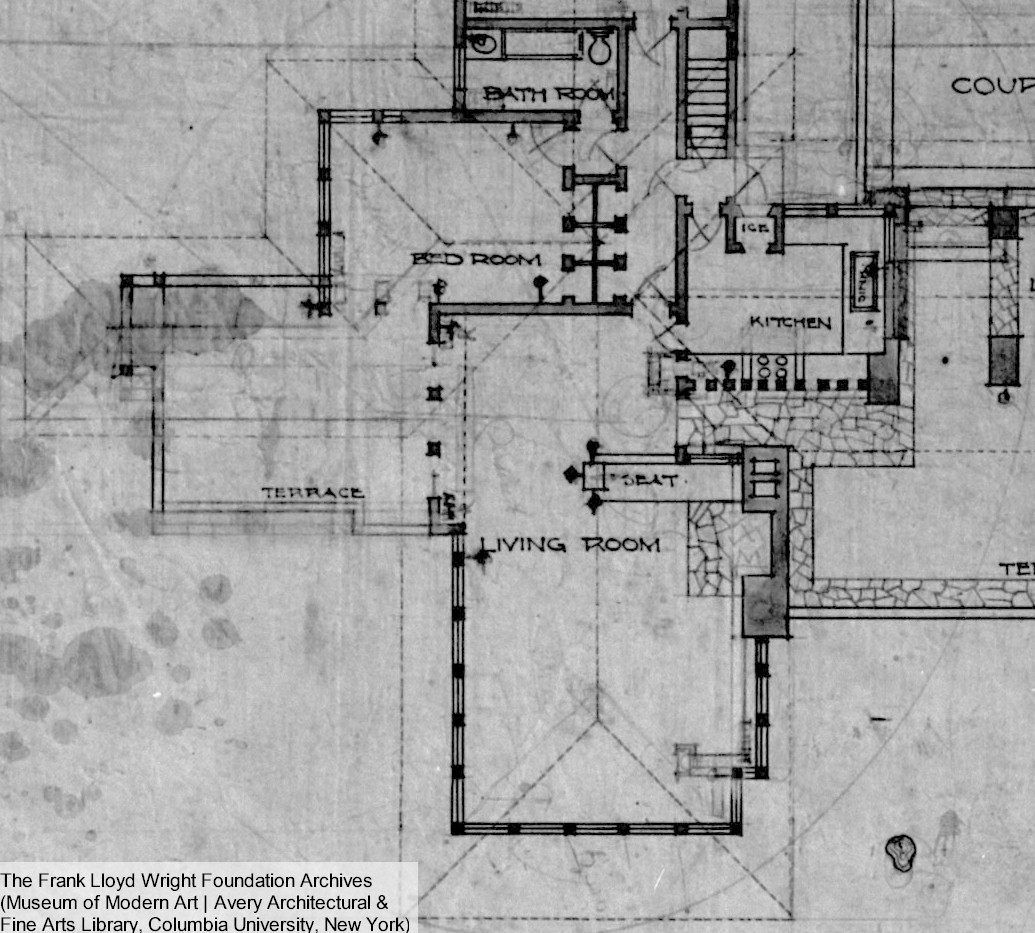 Did Taliesin have outhouses?

A 1911 Taliesin floor plan showing Wright’s living room, kitchen, and his bedroom. The kitchen has a sink and his bedroom had a bathroom with a toilet, sink, and bathtub.
This Taliesin I floor plan, 1104.003, is at the Avery Library in New York City and can be seen online at ARTSTOR.

People want to know: over 110 years ago when Frank Lloyd Wright was building his home out in the country (and public utilities were so not a thing), did Taliesin have an outhouse at any time? Even early on?

I was asked this question many times while giving tours, and asked again last week while giving a presentation, so that’s why I decided to address it.

Taliesin probably didn’t have an outhouse

The floor plan you see above (and shown, completely, online here) shows a large section of Wright’s living quarters as he was designing it in 1911. I showed it because you see that he planned for a home that had a sink in its kitchen, as well as running water in the bathrooms.1

although he didn’t design faucets or hardware for his home

Wright’s approach to getting water to Taliesin was quite ingenious. You see, Taliesin stands about 3 miles (just under 5 kilometers) from the village of Spring Green in Southwestern Wisconsin. So there was no help there even if Spring Green had had a water tower. In 1911, then, if he wanted running water he had to do some tricks.

His aunts’ school (the Hillside Home School, less than a mile away) got its water by using watermills (including Wright’s Romeo and Juliet windmill). Wright did not do that at Taliesin. There was, however, a creek in the valley in which Taliesin sits. He used a hydraulic ram to pump water from the creek up to a reservoir on the hill behind it. The hydraulic ram worked when a drop in the water happened, which took place via a waterfall. He created a waterfall by damming up the creek running through the valley. He completed damming up the creek in early 1912.

The press hearing about Taliesin’s dam

We know his timetable for getting the water going because on December 26, 1911, Wright told visiting reporters about the dam. That’s when they came to Taliesin upon finding out he was living there with Mamah Borthwick. This is written at the end of that Chicago Tribune story:

Then Mr. Wright called to a worker to bring the visitor’s horses. As he stood waiting in the courtyard he talked a little of his bungalow. . . .

Note that the newspaper story says that the dam is “in process of construction”.

Taylor Woolley (draftsman for Wright in 1911-12) took a photograph around that time. It shows the state of the dam’s construction:

This is a cropped photograph by then-draftsman Taylor Woolley. The internet address of this at the Utah Historical Society is here. The photograph looks (true) southwest at the dam being constructed (at the bottom of the photo), with Taliesin seen against the hill above. This photograph is one of over 40 photographic negatives by Woolley that show Taliesin and the Taliesin grounds. Those negatives are available here.

Another photograph by Woolley shows the new waterfall:

Looking (true) east over the Taliesin dam and waterfall. Photograph taken in early 1912 by then-draftsman, Taylor Woolley. This photograph is online here. All of these photographs can be seen in the book, Building Taliesin: Frank Lloyd Wright’s Home of Love and Loss, by Ron McCrea.

Looking at the weather, it looks like the photo was taken in later winter (maybe February?). The hydraulic ram (getting water to the house) was powered by the waterfall.

Wright, about the dam

Wright wrote about the dam, and getting water to Taliesin, in his autobiography (first published in 1932):

Each court had its fountain and the winding stream below had a great dam. A thick stone wall was thrown across it, to make a pond at the very foot of the hill, and raise the water in the Valley to within sight from Taliesin. The water below the falls thus made, was sent, by hydraulic ram, up to a big stone reservoir built into the higher hill, just behind and above the hilltop garden, to come down again into the fountains and go on down to the vegetable gardens on the slopes below the house.

The Chicago Tribune (on December 26, 1911) tells us he was working on the dam. Woolley’s photograph show the waterfall, which means the hydraulic ram was working. So, it appears that Wright had running water at Taliesin by midwinter.

And, while it no longer works, Taliesin’s dam educated me about hydraulic rams.

Thus, the short answer to the question, “Did Taliesin have outhouses”? appears to be NO.

Plus, he (and then Mamah) were only living there for months before he got water running. Where the heck could they go to the bathroom? Well, his sister lived across the way in the house that he designed for her and her husband. In fact, the two homes: Taliesin and Tan-y-deri, are in view of each other (the word Tan-y-deri, like the word, Taliesin, is Welsh; see the Tan-y-deri link for the definition of the word).

1 There were two bathrooms on the main floor of Taliesin’s living quarters.