A Trip Into Hillside History 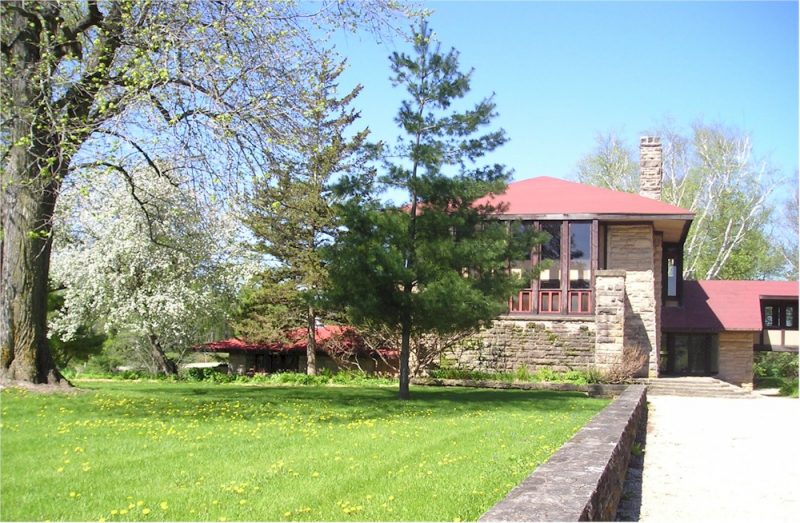 In the late 00’s, I wrote a “comprehensive chronology” of Wright’s Hillside building with the principal of Cornerstone Preservation (which specializes in architectural research and planning). This led me to reading all of those old newspapers I wrote about recently. The post where I detailed some of what you learn by reading old newspapers.1

It’s a short, intense, introduction to Hillside, a building on Wright’s Taliesin estate. Hillside (the Hillside Home School) was once designed by Wright for a school for his aunts. Then, starting 30 years later, he began making changes to it. The building today includes a dining room and kitchen, an assembly hall, studio, and  theater.

Frank Lloyd Wright originally designed the Hillside Home School in 1901. It’s on the south part of the Taliesin estate. After he started the Taliesin Fellowship, he added on to it by in the 1930s and ’40s, and then changed it after a fire occurred there in 1952. “Hillside” seems to be the only building by Wright that shows, distinctly, 4 time periods in his work, spread out over half a century.

The oldest part of the building (1901-02) looks over a dining room reconstructed under Wright’s direction in the 1950s. Walk again through the oldest part (a 1901 hallway), into the Hillside Drafting Studio. This was designed and built in the 1930s.

A walk outside brings you to the Hillside Theater foyer; Wright did that in the late 1940s. The foyer is right next to the theater, also redesigned after the 1952 fire.

So, in Hillside, you jump back and forth in time through Wright’s designs from 1901 to the last part, completed in 1955.

The buildings commissioned by the Aunts:

The building was commissioned initially by two amazing women who were aunts of Frank Lloyd Wright’s: Ellen (“Nell”) and Jane (“Jennie”). The structure served their school, which was also known as the Hillside Home School. Everyone in the area (including the schoolchildren) knew them as Aunt Jennie and Aunt Nell,2 or just “the Aunts”. The school was a coeducational day and boarding school that served children grades 1-12 and ran from 1887 to 1915. Wright actually designed three buildings for the Aunts: the “Home Building”,3 a dormitory and library, built in 1887 (when Wright was 20); a windmill, “Romeo and Juliet”,3 built when he was 30; and the Hillside Home School structure, finished when he was 36.

Those three structures were within a school campus that had additional housing, a greenhouse, a laundry, and a barn with horse stables.

Here are some hyperlinks to photos at the Wisconsin Historical Society that show things at the school:

If one were to go through Hillside today, you would just see the Hillside Home School and the Romeo and Juliet Windmill. Wright slowly eliminated the other school buildings, destroying the last one in 1950.

OK! So I gave you the basic background, here’s info on the school and Jennie and Nell Lloyd Jones.

Ok, why did Wright call her “Aunt Jane” in his autobiography when you keep writing “Aunt Jennie”? I think he introduced her as Jane because he had a sister named Jane (Jane Porter), who was apparently known as Jennie.

Two things about my ignorance:

It’s more complex than I knew before I started giving tours in the 1990s. To me, kindergarten was that fun school I went to as a little girl where we took a nap each day.

But kindergarten was a method of teaching children invented by Germany Friedrich Froebel (froy-bel). He created these learning devices called the “Froebel Gifts” that were designed to teach children about the underlying geometry in nature.4

Wright’s mother discovered the Froebel Gifts at the Centennial Exposition in Philadelphia, and introduced them to her son.

Here’s the 99 Percent Invisible podcast episode about the Kindergarten and Froebel:

Thanks to Wikipedia, I now know that “Normal Schools” were schools for teaching people how to be teachers. As opposed to how to be, you know, “normal”.

There’s a great book on the Hillside Home School: A Goodly Fellowship, by educator Mary Ellen Chase. You can find the book in libraries, or for purchase through www.abebooks.com.

The Aunts gave Chase her first teaching job. While I wish I could copy everything she wrote, I’ll give you this:

p. 90
[D]uring the three years I lived and worked with [the Aunts], they always took me by surprise and left me in wonder…. I was later to understand how together they gave the warmth and the fire, the stability and the strength, the soul and the spirit which for nearly thirty years sustained and supported the most wholesome and abundant of schools….

Some graduates of Hillside:

The students who went to the Hillside Home School included:

In 1907, the Weekly Home News (Spring Green’s newspaper), ran a story on the school  and stated that by that year those who graduated from Hillside were automatically accepted into the University of Illinois at Chicago, or to Wellesley College.

Their ages, economic problems caused by poor real estate choices, a lack of a successor and, yes, the murders at their nephew’s home less than a mile away (in August 1914) were among the reasons the Aunts had to close their school. They sold the buildings and land to Wright and died a few years later.

The buildings were unused between 1915 and 1932. In the late ‘teens-early twenties, Wright was working in Japan on the Imperial Hotel in Tokyo,* then had commissions in California. Then another devastating fire occurred at his house in 1925, followed by lots of personal, legal, and economic problems (that are too numerous to go into here).

Wright looked back to the Hillside buildings:

In 1928, he started thinking about using the buildings for a school (he called it the “Hillside Home School of the Allied Arts”). That didn’t go anywhere for a variety of reasons. So, in 1932, he and his third wife, Olgivanna, opened the Taliesin Fellowship, an architectural apprenticeship program, with him at the head. 23 apprentices arrived that October to work with Wright. At his home, Taliesin, he converted the former hayloft, horse stable and cow barn into dormitory rooms.

Wright’s career after the Fellowship’s founding in 1932:

Upon founding the Taliesin Fellowship, Wright sent the apprentices to work at Hillside. They built onto the existing school by starting a 5,000 sq. foot drafting studio with eight dormitory rooms on each side. By November of the next year, they had converted the school’s gymnasium into a theater, named the Playhouse by Wright. Here are links to a couple of photographs that show the Hillside Drafting Studio and the Playhouse:

The Playhouse its opening weekend:
https://www.gettyimages.com/detail/news-photo/the-new-taliesin-hillside-theater-looking-toward-the-rear-news-photo/1139715311

While construction of the Hillside Drafting Studio began pretty early in the Fellowship history (1932? 1933?), Wright didn’t structurally complete until late 1938. It’s cute reading accounts by Taliesin Fellowship apprentices in the mid-’30s: they wrote about how the drafting studio be in use soon!5 However, they didn’t get it all set up and opened until July 1939.

The Hillside Drafting Studio becomes the main studio for Wright in Wisconsin:

Once the Fellowship and Wright moved into the Hillside Drafting Studio, all of the drafting work in Wisconsin was done there (not in his first studio at his house).

Here‘s for a photo of Wright working in the Hillside Drafting Studio. It’s from the collection of photos by his photographer, Pedro Guerrero. I don’t know, but I would imagine that having the larger space with less distraction was a goal for working with young architectural apprentices. The only outdoor light came from clerestory windows above and two doors on the north side of the room.

I’m not sure what happened while World War II was going on, but drafting was definitely done in the studio when World War II was over. I looked at one of the major books cataloguing Wright’s architecture (William Allin Storrer’s The Frank Lloyd Wright Companion) to count the number of commissions. Looks like Wright and the Fellowship designed and executed 240 buildings from 1945 until the architect’s death in 1959. And, in the summer, the Fellowship did all of the design work at the Hillside Studio in Wisconsin.

Wright did more construction at Hillside after World War II:

By 1948 he added a foyer onto the Playhouse. The foyer is made mostly out of stone with no insulation. That’s in part because by 1948, Wright and the Fellowship were spending every winter in Arizona at Taliesin West. I’ve not seen ice inside the building in April, but I have seen my breath in the cold (as of September 2020, tours don’t go into Hillside after Halloween and before May 1).

In 1950, Wright had the Home Building torn down.

Two years later there was a major fire at Hillside:

I don’t know if Wright would have changed things at Hillside in the 1950s, but a fire, caused by brush, happened on April 26, 1952. It destroyed the part of the building that had the 1901 classrooms on the building’s south side. The fire also mostly destroyed the Playhouse. In the edition of The Weekly Home News on May 1, Wright said “… the building will be much better looking…” when he rebuilt it. And that, “That smoke-tone is wonderful… I couldn’t have darkened it so evenly if I’d done it myself. Nature is God’s technician.”

The building was cleaned up in the summer of 1952 with construction happening the following two summers (click here for a photo of Wright by Pedro Guerrero supervising an apprentice Kelly Oliver on the roof at Hillside during reconstruction). The building was apparently complete by Wright’s birthday, June 8, in 1955.

This Hillside Theater (or Theatre depending on how fancy you feel) has two sections of metal seats, set into poured concrete and 90 degrees to each other.

Because this part of the building was constructed during the summer, Wright didn’t seem to care so much about drainage or things of that nature. After more than 50 years, this was a growing concern. The Frank Lloyd Wright Foundation received a Save America’s Treasures grant for the Theater, announced in 2018. Restoration work began in 2020.

First published 9/23/2020.
The photograph at the top of this post shows the Hillside Assembly Hall. I took this in 2008.

1 In part, you learn that a lot of people died 100 years ago from, say, fever, dropsy, appendicitis, or what happens when you lean your loaded shotgun against tree while jumping over a fence (note: if it’s in the newspaper, the loaded shogun probably fell over, shot you and killed you).

2 I didn’t even know I was referenced in this article until over 2 years after I wrote this post above.

4 The first kindergarten was in Wisconsin.

5 You read these cute accounts in a weekly newspaper column entitled “At Taliesin” that were found, transcribed, then edited into a book by Randolph C. Henning.