About a Wall at Taliesin That No Longer Exists 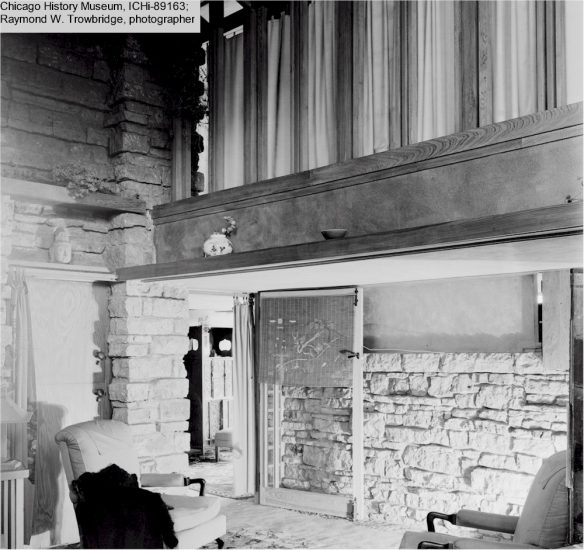 I wrote this to myself over a decade ago.

When I was asking questions about the history of Taliesin (as I often do). But, to start off: this post is about the photo at the top of this page.

I’ve been trying to figure out the history of a wall between two rooms in Wright’s living quarters at Taliesin. These rooms, known as the Loggia and the Loggia fireplace, were, in 1911, a guest bedroom and a sitting room (which had a fireplace then, too). Taliesin’s living quarters were destroyed by fire down to the foundations and chimneys in 1914.

Wright rebuilt the living quarters in 1914-15 and renamed them Taliesin II. In the rebuilding, he took the guest bedroom and redesigned it into a room he called the Loggia (then added a guest bedroom to the south of the sitting room). He picked “Loggia” as the name for the room because there were stone piers on one side of the room (and it had a stone floor).

Wikipedia has a nice definition of loggia.

Wright noted that the Loggia “looked up the Valley to the Lloyd-Jones Chapel.” [this quote is in his autobiography, published in Frank Lloyd Wright: Collected Writings, v. 2, 241.] The ‘Valley’ is the Wisconsin valley settled by his Lloyd Jones family.

The east side of the Loggia looked toward the family Valley; its west side opened to the Loggia fireplace, and you can see it in a Taliesin II floor plan that’s online here. The room is labelled “sitting room” because it worked with the bedroom to its right.

The living quarters were again consumed by fire in 1925. Reconstruction occurred on the building throughout that year, giving us (as he later named it) Taliesin III. This version of the living quarters is what still exists. Although it looked lot different in 1959 than when he rebuilt in 1925.

I mean, it’s still rectangular and constructed of stone, plaster and wood, with cedar shingles on the roof and plate glass in the windows, but…. The man made changes in almost every part of the building so understanding old photographs takes a little bit of reconfiguring in your brain.

There aren’t many photos for either of these spaces (today’s Loggia and loggia fireplace) before 1950. That’s why, when I first saw the photo at the top of this page, I didn’t know what room I was looking at.

The photo is in the public domain, which is why I feel fine showing it.

You are seeing the interior of Taliesin, though. This is looking northeast from the Loggia fireplace area (the fireplace is behind the photographer). The stone wall you see on the right stood between the Loggia fireplace and the Loggia. It was probably a foot wide, close to 5 feet tall, and about 10 feet long. No other photograph shows it, and Wright removed it some time in the 1930s.

When was the photo taken? Evidence suggests the photograph took it in the summer of 1930. I’ll explain how I know that in the next blog post.

What are you seeing in this photograph?

The photo is cool if you don’t know Taliesin, but it’s probably pretty confusing if you do. If you stood at this same spot at Taliesin today, only two things are the same: the radiator cover to the left of the chair on the left is the same (the radiator cover is what looks like a wooden table with spindles). And the passageway behind the chair, through the wooden door, is still there,

Only the door itself isn’t. That’s because Wright no longer needed it.

When this photo was taken, you would have gone through the door, take a left, then through another door. Then you’d be outside. In the 1940s, Wright changed that entryway. Because of that, he removed the wooden door since he no longer needed it.

What the photograph shows that is now different:

Now that I’ve covered what’s the same, there’s what’s different. Or some of it, anyway.

What’s most noticeably different to anyone at Taliesin today is the stone wall (with wood above it) on the right. The wall had a glass door framed in wood and that doesn’t exist anymore. And, at the top of the photo, there’s the parapet (the stucco wall) with vertical wooden piers.

What you would see today:

If you were at Taliesin today you would not see the stone wall or the parapet. That’s different because of the other major change: the ceiling is much lower. In 1933-34 he lowered ceiling to build rooms above for his daughter, Iovanna (1925-2015).

And of course when I write that Wright “built” anything: the people who did this were either workers or architectural apprentices. And, after 1932, most of the work was by his apprentices in the Taliesin Fellowship.

One of them, Abe Dombar, wrote about the changed that lowerd the ceiling in “At Taliesin”. This was the regular newspaper features. This one was published February 9, 1934:

Two new rooms added to the pageant of Taliesin’s 40 rooms merely by lowering the ceiling of the loggia and raising the roof above it to get the most playful room in the house.  The boys call it a “scherzo.”  This is little eight year old Iovanna’s room.  Until now she was the only apprentice who didn’t have his or her own room.”

The stone wall that no longer exists:

That wall, though. I’ve spent a lot of energy on trying to figure out when, exactly, he had it removed. And I’ve tried to figure out what was going on underneath it, allowing it to stand without damaging the floor. Because looking at its possible dimensions (I think it was about 1’x5’x10’—30cm x 1.5m x 3m, or so), the wall (built in limestone) probably weighed around a ton (just over 900 kg).

But I’ve checked, and there’s no wall below taking the weight. You’d think that he would have done something to the floor below to hold something that heavy, but no.

And, while I often say “Taliesin keeps its history within its walls”,

There’s nothing around this area that tells you a wall was there. I’ve walked along the floor (probably even gotten on my hands and knees and crawled along it). There’s nothing there that lets you know that a substantial wall, about a foot wide, once stood on it. While normally at Taliesin, you can’t just hack a stone wall down and not leave a footprint. But, that’s not what’s going on here.

I think what might have happened is that Wright rebuilt the living quarters in 1925, and after it was done, decided to add the stone wall on top of the preexisting stone floor. Then he later decided to get rid of it.

But there’s no record of anyone taking it down. His apprentices in the Taliesin Fellowship were doing so much that they didn’t have time to note things or take photos of their work.

And studying the building usually doesn’t result in tracking down every change (even if you knew it happened). Or, frequently, figure out how to ask who did what/where/when.

I think the Administrator of Historic Studies at the Frank Lloyd Wright Foundation, Indira Berndtson, has done the best job tracking things down in part because she has lived at Taliesin (and Taliesin West), and has known people in Wright’s life so well. Starting in the mid-late 1980s, she began doing interviews with former apprentices, clients, and friends of Wright’s. Because she knew (and knows) so many of these people, she might be speaking to them, and be reminded of something someone else said. Then she could add, “So-and-so said they remembered you all doing this,” and that would push someone’s memory to add to the story.

Information at changes to Taliesin:

The only time you get actual, on-the-spot information is when Taliesin Fellowship apprentices wrote letters to family, wrote the weekly “At Taliesin” newspaper articles (1934-37) or, in the case of one, kept a daily diary (this was Priscilla Henken who was in the Taliesin Fellowship with her husband in 1942-43). There are books and articles that people wrote about their time in the Fellowship, but other than those things, there’s no consistent way of getting information on changes at Taliesin as they were happening.

Sketches of the wall exist, but nothing definitive. There’s one drawing which appears to match reality, but it doesn’t show the wall. I’ve dated that drawing to  1936-37 based on architectural details and you can get to it through this link.

If you look at the drawing, the Loggia fireplace is the fireplace that’s at the lower right, backed up against a rectangular roof.

Back to the wonderful photograph above:

Ken Hedrich took the next, dated, photograph of the space in 1937. That doesn’t show the wall.

btw: he took this photograph (linked through here) for the January 1938 issue of Architectural Forum magazine, which focused on Wright.

In the end, at this moment,1 I have the curiosity that there was a wall at Taliesin that was later removed, for which there really isn’t any evidence and I can’t quite figure out why the wall didn’t mess up the floor (making the stone floor, or the ceiling below, crack with the weight).

Although I always hope that I’ll come across a diary entry where someone wrote, “we were asked to take down a stone wall. I had stone grit in my food for 3 days afterwards.”

The photograph at the top of this post was by Raymond Trowbridge and is at the Chicago History Museum, ICHi-89166. It is in the public domain. This is a larger version on the keiranmurphy.com website.