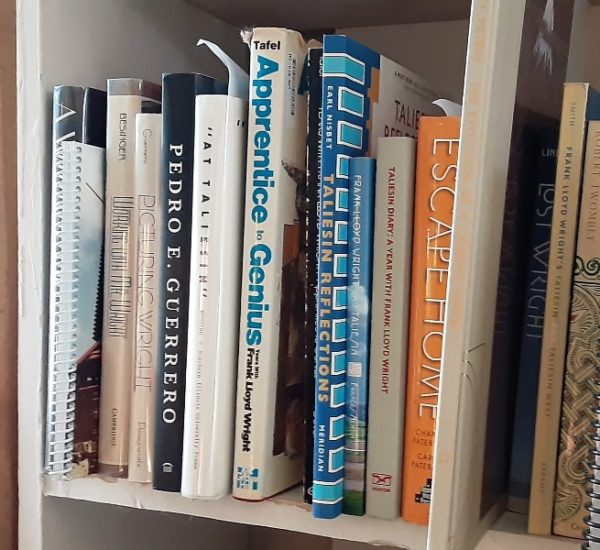 Last time I wrote on the book Years With Frank Lloyd Wright: Apprentice to Genius by former Wright apprentice, Edgar Tafel. I said I’d write more about other books by apprentices in the Taliesin Fellowship this week.

If you need to remember what the Taliesin Fellowship is, click here

Reflections From the Shining Brow: My years with Frank Lloyd Wright and Olgivanna Lazovich Wright, by Kamal Amin

Amin came from Egypt to join the Fellowship in 1951 and remained until 1978. The book provides insight into Wright and gives a unique portrait of his wife, Olgivanna (known as Mrs. Wright to many who knew her).

Working with Frank Lloyd Wright: What it was Like, by Curtis Besinger

A nice companion to “Apprentice to Genius”. Besinger entered the Fellowship in 1939 and stayed until 1955. His writing brings you year by year between the two Taliesins (Wisconsin in the summer and Taliesin West in Arizona in the winter). He wrote about his life in the group, particular projects (like the Unitarian meeting House in Madison), movies and music at Taliesin and the feelings among apprentices regarding World War II.

See the book below (A Taliesin Diary, by Priscilla Henken), for the day-to-day Fellowship life during World War II.

Tales of Taliesin: A Memoir of Fellowship, by Cornelia Brierly

Cornelia was an early Taliesin apprentice. She married fellow apprentice (Peter Berndtson), then lived with him in Pittsburgh, where he set up an architecture practice. Moving back to Taliesin after their divorce in the late 1950s, Cornelia stayed at the two Taliesins until her death in 2012. The book contains a collection of her remembrances, which are often humorous and not found find anywhere else. The book includes interesting photos from her collection.

A portrait of his life growing up and his career, “A Photographer’s Journey” is also about Guerrero’s work and relationships with three major artists of the 20th Century: architect Frank Lloyd Wright, and world-famous sculptors Alexander Calder and Louise Nevelson. In addition, he writes about his work appearing in magazines House Beautiful, House & Garden, and Vogue among others (while always working at Wright’s request).

Picturing Wright is the story of how “Pete” (as he asked to be called) ended up working for Wright. His experience with Wright is, I think, an insight into the architect. 72 years old when they met, Wright took on some kid 50 years younger who had no professional experience and gave him all the work he wanted. I think it shows Wright’s openness for new things, new ideas, & talent.

Check out Guerrero’s website, https://guerrerophoto.com/, which has a wonderful collection of his photographs.

A Taliesin Diary: A Year with Frank Lloyd Wright, by Priscilla Henken

Unlike other books by apprentices written years later, this was an actual diary kept by Priscilla while she and her husband, David, were in the Fellowship (1942-43). Her day-by-day observations give a unique perspective on daily life in the Fellowship, along with observations on Wright and his family. Including never-before-published photographs taken by the Henkens.

Frances was in the Taliesin Fellowship from 1946 until her death in 2015. While she wrote a variety of booklets about her life in the Fellowship, or about various aspects of the life at Taliesin, the books, Frank Lloyd Wright and Taliesin, and Like a Fern Unfurling: My Life So Far, were published in hardcover. Some of the booklets may only be available still in gift shop at the Frank Lloyd Wright Visitor Center, so perhaps you’ll see them if you take a Taliesin tour this year.

Several of the books are listed on Amazon.com that you might want to look at:

Taliesin Reflections: My Years Before, During, and After Living With Frank Lloyd Wright, by Earl Nisbet

Nisbet was in the Taliesin Fellowship in 1951-1953 and his “Taliesin Reflections”—short vignettes—are interspersed with profiles of people in the Fellowship that he knew (Gene Masselink, Wes Peters, Jack Howe, and others). When Nisbet went into a career in architecture, he employed lessons from Wright into his practice. The book has original illustrations and photographs.

Paterson wrote a fascinating book about his life, beginning in the 1930s in Austria. His father helped him and his sister escape to Australia during World War II, and they reunited in the United States after the war. His apprenticeship was one stop before he moved to the raw Colorado town of Aspen. And that’s without mentioning his uncle, architect, Adolf Loos!

At Taliesin: Newspaper Columns by Frank Lloyd Wright and the Taliesin Fellowship, 1934-1937, compiled by Randolph Henning

Another companion to “Apprentice to Genius”, Henning found as many of the weekly “At Taliesin” newspaper as possible, transcribed and edited them into a book. The book thus shows the early years of the Fellowship as Wright and the apprentices were living them. And, imo, it demonstrates why these kids in their early 20s would move out to rural Wisconsin to live and work with a man old enough to be their grandfather, and liked it. The book contains unique photographs found almost nowhere else.

About Wright: An Album of Recollections by Those Who Knew Frank Lloyd Wright, Edgar Tafel, ed., with foreword by Tom Wolfe

These are great remembrances by a wide selection of people from all aspects of Wright’s life: friends, co-workers, family, and former apprentices.

A Way of Life: An Apprenticeship with Frank Lloyd Wright, by Lois Davidson Gottlieb

Gottlieb was an apprentice in 1948-49, took beautiful photographs of both Taliesins, and published them in this book. Let me tell you: it really makes a person love Kodachrome film; the colors on the photos are amazing.

An exploration of the “Box Projects” (bi-yearly creative projects given to Frank Lloyd Wright) by Peters. Beautifully illustrated with writing placing the projects in context.

Here are links to blogs written by former apprentices:

John Geiger was hoping to get this up before he died in 2011. He did try to trace apprentices, and there’s a list on his site. He also had photographs that he gave to the Frank Lloyd Wright Foundation.

An overview of his information with an explanation of how he organized it is available here: https://jgonwright.net/jgdb1.html

Robert M. Green, an apprentice in the last months of Frank Lloyd Wright’s life, kept a website and wrote about his reasons for leaving the Taliesin Fellowship.

I took image at the top of this page.