I took the photograph above on May 14, 2004.
Looking (plan) north at the door to the alcove of Taliesin’s Drafting Studio.

Recently, I came across what I wrote to myself during Taliesin’s Save America’s Treasures project in 2003-04. It reminded me of one of the “finds” during that project. That’s what I’m going to write about in this post.

This is not the same as Save America’s Treasures Hillside Theatre project. That project, begun in 2020, is being undertaken by the Frank Lloyd Wright Foundation.

This other “SATs” project was carried out by Taliesin Preservation. The project’s purpose was to construct a drainage solution to the Taliesin residence. The Taliesin residence is at the “brow” of a hill (Taliesin, meaning “Shining Brow” in Welsh), so all the water had to get from the top of the hill to the bottom.

Wright initially installed drainage at Taliesin. However, because he continuously changed Taliesin—and he never used gutters—the water, eventually, went through the building.

Not an ideal circumstance

One of the things I discovered in preservation is that water, in its liquid and solid form, is the most pernicious substance. It can expand, creating pressure. In humidity it can encourage mold. It can turn plaster into mush and wooden beams into fibrous soggy filaments.

Taliesin had all of these things and more.

Taliesin’s Save America’s Treasures project was designed, then, to move water, ice, and snow around the building, while not completely rebuilding or destroying it. Therefore, in order to do this, all of the flagstone in the main court was removed, and drainage was added under it to move the water around it. In addition, concrete walls were constructed under the main building, to help the drainage. This removed stone included that in Taliesin’s Breezeway (that’s the area under the roof between his home and his studio). So, the construction firm that worked with Taliesin Preservation removed the stone, while the Preservation Crew removed a door and door jam of the alcove in Taliesin’s Breezeway. A photograph of that door at the alcove is at the top of this post.

When the crew member removed the door and frame, he found a window hidden in the stone column on the west (or on the left in the photo above).

We had no idea the window was there.

Although, things being “uncovered” and “found” during this project happened so much that when the crew member found this window, I was like, “Oh, yes. Of course. Something else. Thanks, Frank!“

How he found the window was by removing the door jamb from the stone pier. As it turned out, the top foot (or so) of the stone pier was hollow, with a 1′ 3″ window tucked inside.

I’ll show a couple of photos to explain. First, is a photograph showing the alcove with the door removed: 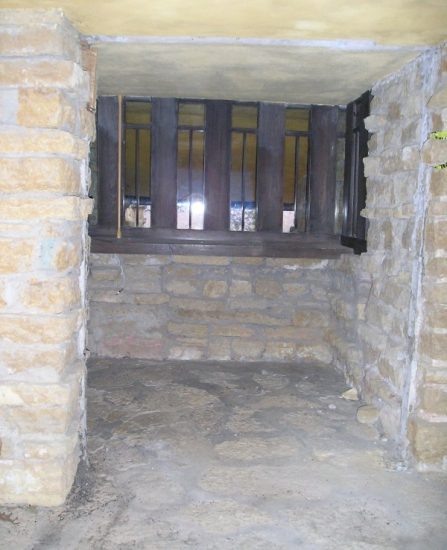 Looking (plan) north into the alcove outside of Taliesin’s Drafting Studio. You can see where the frame was removed. The found window is at the top on the left. I took this photograph.

Next is a photo looking at the column with the window: 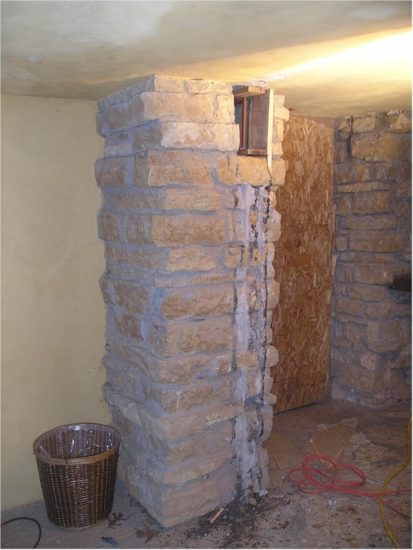 Looking (plan) northwest at the column with the window. To the right of the window is where the door to Wright’s drafting studio usually is.

Then a close-up looking at the window: 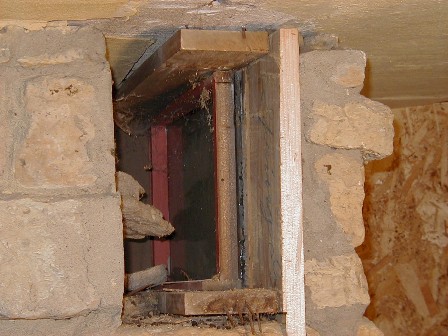 I took this photograph of the newly discovered window (with a red frame) in November 2003.
The stone on either side hid the window. The wooden board has the word “Spring Gr…” written on top of it.

We had already noticed a gap between the top of the pier and the ceiling above it. We had wondered if there was a problem at all. But this window proved that the pier had never supported anything in the ceiling.

So: Wright had the pier built, then at some point he decided he didn’t want the little window there anymore. Therefore, he just had his apprentices enclose it by slapping some stone on one side, then on the other. It was probably the simplest solution.

After finding this, I embarked on my usual activity:

I looked for evidence of this little window in floor plans, elevations, and photographs. Although, the pier is underneath a deep overhang, thus any glancing photographs of the area didn’t show a tiny window like this.

And, while I’ve noted that Taliesin’s drawings are unreliable, they can be helpful.

For that reason, I looked at drawings hoping to catch something. One of those drawings was a Xerox. It’s a hand-drawn floor plan, with written measurements alongside everything (maybe Wright had one of his early apprentices do this early in the history of the Taliesin Fellowship). 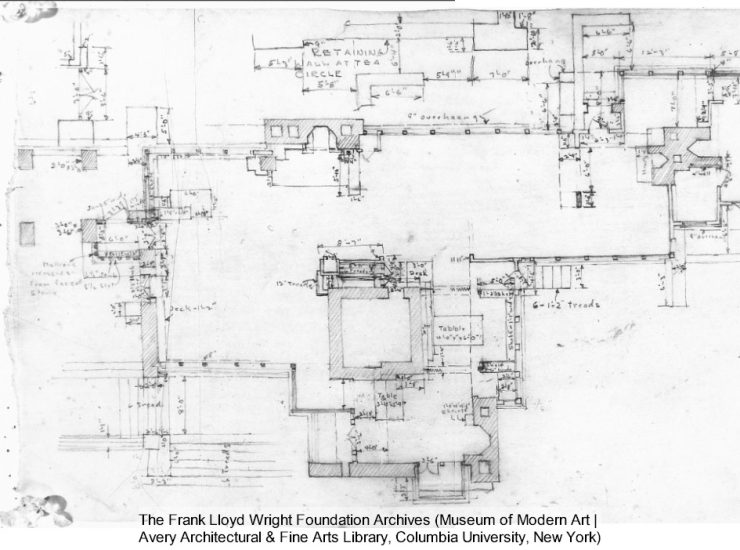 Looking at the drawing with a magnifying glass I saw “1′ 3″ window” written and it was pointed right at “our” window. I’ve put a close-up of the drawing to show it, below (with the words 1′ 3″ highlighted): 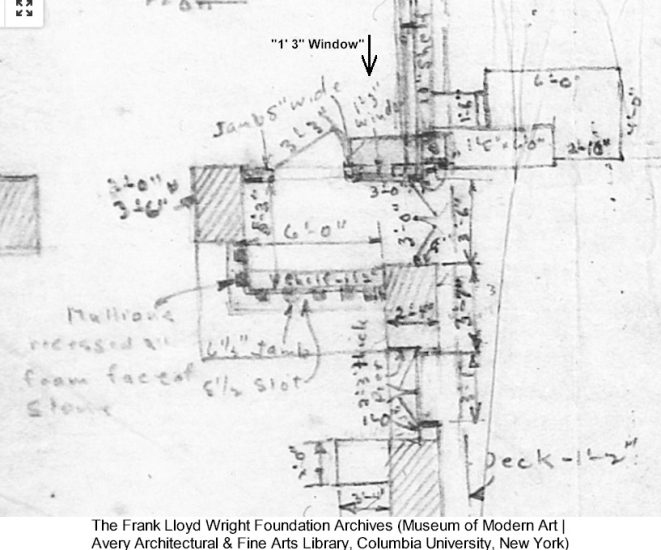 I saw this notation on the drawing at the end of the day, when I was alone in the office. When I saw it, I just started laughing. This amazing thing that we found. . . and there it sat for years, unnoticed, in a drawing.

After laughing, I wrote up the information, and sent that, as well as the scans showing photos, floor plans, and elevations, and my new photos, in an email to my supervisor.

That day was a hell of a lot of fun.