Frank Lloyd Wright buildings are smaller than you think 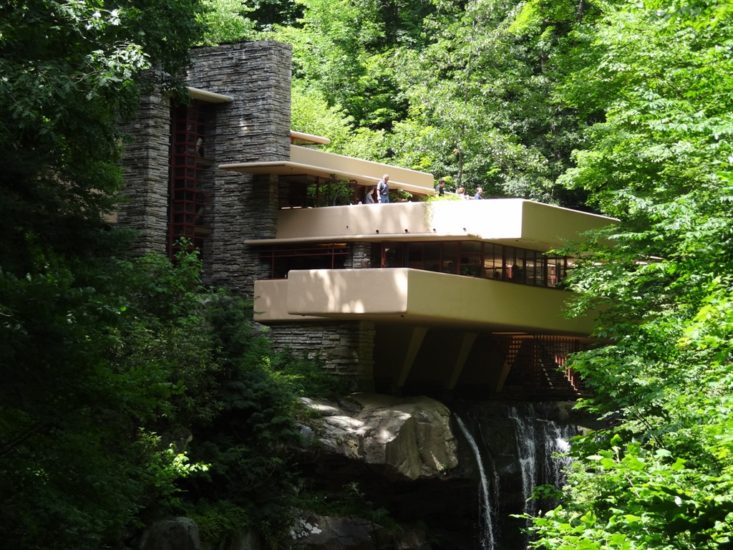 Photograph of Fallingwater by Esther Westerveld from Haarlemmermeer, Nederland in 2012.
The people standing on the upper terrace in this photograph are not 7 feet tall. They are normal-sized people.
It’s the architecture that’s messing with your mind.

I’m talking about what everyone—outside of Frank Lloyd Wright homeowners—has experienced: you go to a Wright structure and it’s smaller in reality than what it looks like in photos. I do try to remember that, but it’s always a shock when I walk into any of his buildings.

Why do I always get it wrong? Former apprentice, Edgar Tafel, explained why in his book, “Apprentice to Genius”:

. . . Mr. Wright made one extensive change that affected every physical element—as well as the impressions and reactions of every person who entered the house: He changed the scale and brought it down to his own human reference. He often used to tell us. . . . , “I took the human being, at five feet eight and one-half inches tall, like myself, as the human scale. If I had been taller the scale might have been different.”1
Edgar Tafel. Years with Frank Lloyd Wright: Apprentice to Genius (1985; Dover Publications, Inc.; McGraw-Hill Book Company, New York, 1979), 50.

Wright’s trick in his architecture

Wright apparently said a person only needs 6 inches over their heads so, since he was the “human scale”, when you enter his buildings, the ceilings would be 6 feet 2 inches tall. This creates “compression”. Then the ceilings suddenly get taller in the spaces where you are meant to linger. That creates a “release”.

The ceilings, entryways, and trim (emphasizing the horizontal) create the scale. So, when we see ceilings and doorways  in photographs, we “read” them as 7 feet tall, or taller, because that’s what we’re used to. Since we see them that tall, we read everything else as bigger.1 This element of design is one of the reasons that I like to see people in photographs of Wright buildings: because other people give you a sense of the scale (even when the people mess with the pretty architecture!<–I’m mostly joking right there).

Although, I still laugh at myself when I go to a Wright building because, yup: they’re smaller than I thought they would be.

How this trick played into Preservation work at Taliesin

Over a decade ago, while the Preservation Crew was restoring Olgivanna Lloyd Wright’s bedroom, they were planning on reconstructing some of its Wright-designed built-in furnishings.

She and her husband shared a bedroom at Taliesin until 1936, then they moved to adjoining rooms. This was probably because Wright didn’t sleep very much and was almost 30 years older than she was (so he needed even less sleep). Makes sense to me: if I want to sleep while my husband watches movies in bed, I put on my sleep mask.

So, the plan included the Preservation Crew rebuilding a set of small horizontal shelves at a mullion (you can see color photos of the rebuilt shelves below). But the Crew had a problem: no detailed drawings of the room exist. So how would they know how big the shelves should be? Now, if Taliesin had been built for a client, there would have been floor plan and elevation drawings, as well as drawings for furniture and built-ins. All of those things would have measurements. But because Taliesin was his own home (reconstructed after the second fire of 1925), he could simply tell the carpenters and builders what to build. Or he gave them sketches. However, those must have been thrown out, since no drawings existed.

My find at the Wisconsin Historical Society

Luckily at this time, I took a trip to the Wisconsin Historical Society to look at photographs in the John H. Howe collection (“Jack” had been in the Taliesin Fellowship from 1932-64 and took thousands of photographs). Two of his photographs show Olgivanna Lloyd Wright’s bedroom, which show the shelves. I emailed the photographs (one at this link) to the onsite collections manager for the Frank Lloyd Wright Foundation. A few days later, he stopped by the office and told me that one of the photos showed a perfume bottle on one of the shelves. And, he said, “We have that perfume bottle.”

Apparently, he also showed the Preservation Crew the photograph and perfume bottle, and they used the perfume bottle to get the scale of the shelves they were going to rebuild.

You can see the rebuilt room in the photograph below, followed by a close-up of the shelves: 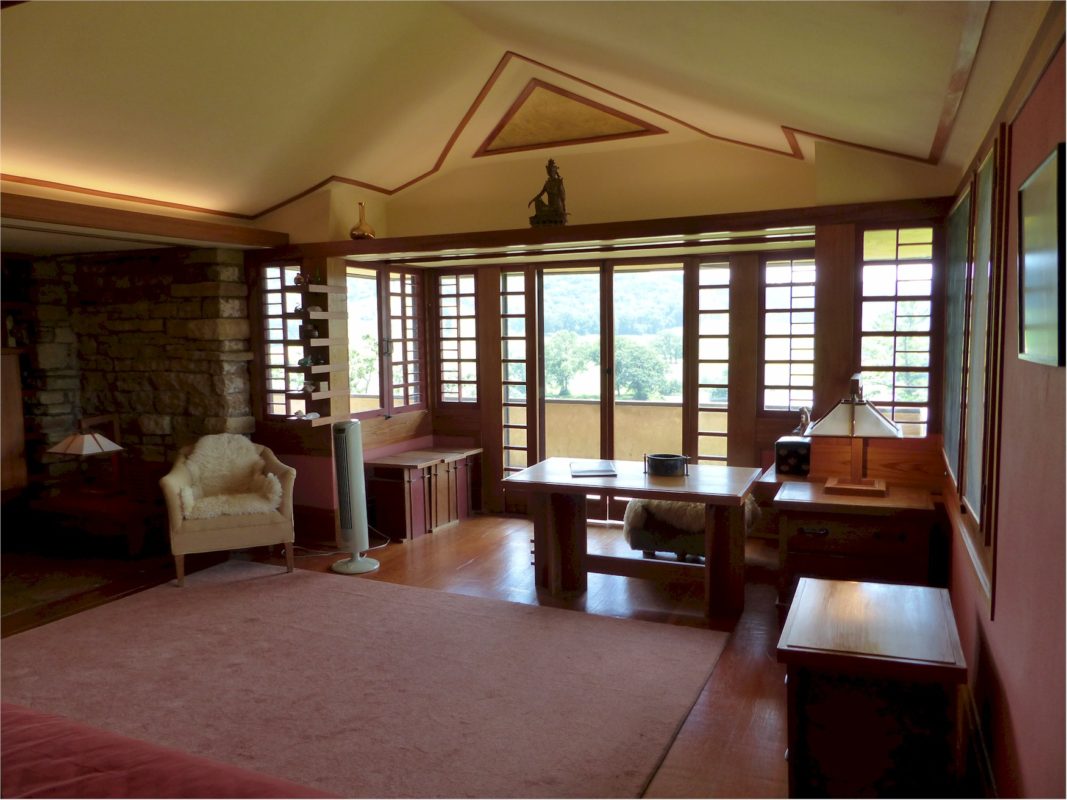 Photograph of Olgivanna Lloyd Wright’s bedroom. The shelves are to the right of the small chair.

Taken by user Stilfehler. Information and a larger version of this image is at https://commons.wikimedia.org/wiki/File:Taliesin_Interior_32.jpg
This file is licensed under the Creative Commons Attribution 2.0 Generic license. 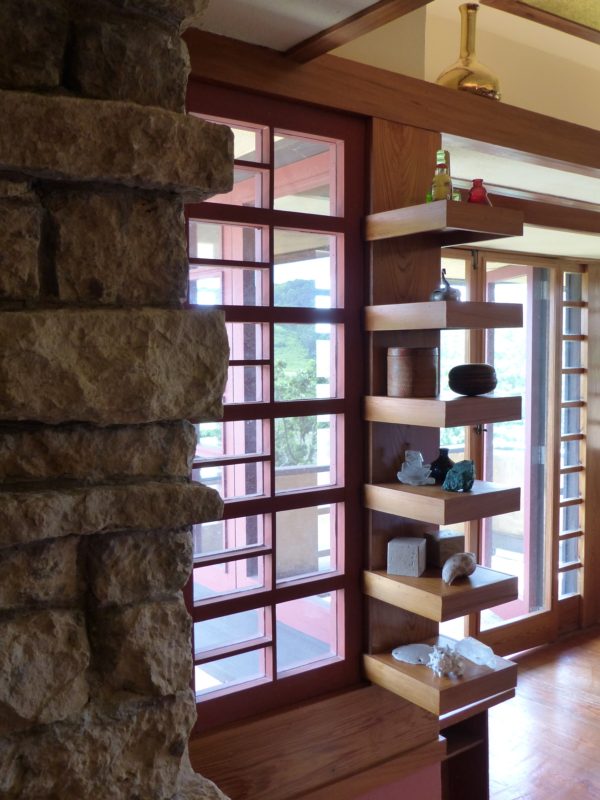 Shelves in Olgivanna Lloyd Wright’s Bedroom. The perfume bottle, on the top shelf, is green. It’s behind an amber-colored glass jar so you can see just a little bit of it.

Taken by user Stilfehler. Information and a larger version of this image is at https://commons.wikimedia.org/wiki/File:Taliesin_Interior_28.jpg
This file is licensed under the Creative Commons Attribution 2.0 Generic license.

There are other things that the Preservation Crew has done in Olgivanna Lloyd Wright’s bedroom, and on the Taliesin Estate overall, that are inventive and smart. Still, given my contribution to their work, I always liked to tell the story of the perfume bottle while giving tours through her bedroom.

OK, Keiran, that’s a cute trick. But why did he do this with the scale?

I think the full answer to the question probably requires reading Frank Lloyd Wright’s autobiography to understand his design philosophy,2 but I think he did it for at least two reasons. Firstly, he did it because it makes the space feel larger. Especially when you sit down. And, secondly, the lower scale creates more compression which, upon “release” generates feelings of surprise, drama and delight inside his homes.

First published March 19, 2021.
The image at the top of this post is licensed under the Creative Commons Attribution 2.0 Generic license. The image is available at Creative Commons, which has its licensing information and a larger version.

1 Well, then you go, “what – so the guy never designed for people over 5’8″?” He did. For example, Louis Penfield, who commissioned Wright for a home in Ohio, was 6 feet 9 inches tall. Wright made the hallways thinner and the ceilings taller. You can rent the building overnight. It’s the only Wright building I’ve been in where everything, yes, looks as big as the pictures.

2 Or “why did he do this” requires the answer given by another former tour guide (hi again, Bryan): “Oh! Because he was a genius.”