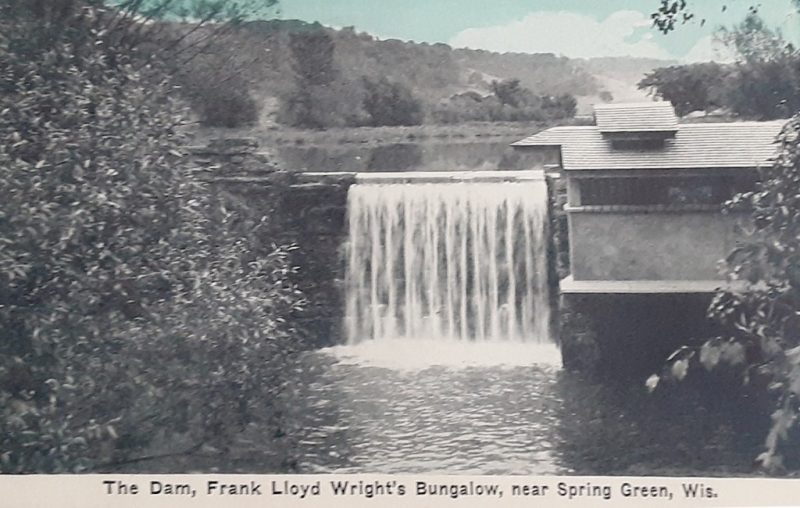 In early fall 2019, the Frank Lloyd Wright Foundation began work on Taliesin’s dam on Wright’s estate in Wisconsin. When the work is done (hopefully in 2021), the pond, which can be seen from Wright’s house, will again be filled, with the waterfall on its north running, which can be heard consistently from the building.

Those working in preservation for the Frank Lloyd Wright Foundation did a segment on the work in a Facebook feed in August 2020 that’s pretty cool. It included an explanation of what they were doing and why.

This work made me think about the historic photographs of the waterfall (including the one above), my study of it, and how that played into how I approached all study of the history of Taliesin.

My start in the dam history

I first came across a lot of photographs (or, really, photocopies) of the dam and waterfall that winter I worked in the Preservation Office, arranging photos into binders. Since the dam and waterfall aren’t near any building elements, I had to pay close attention to details to try to figure out which photographs had been taken earlier, or later. To try to get a chronology of them, in other words. Since there were only four photographs with dates attached to them, I examined the stone and the heights of trees and thickness of tree branches. In the end (and in order to retain the memory of what I learned) I wrote these things down into a short document entitled “Preliminary research into the construction history of the Lower Dam on the Taliesin Estate”, or as I referred to it, “My Dam History”, stated emphatically to anyone who would listen. What’s below is informed by that and from what I found out in the years since then.

Wright on his dam:

Wright began construction on his home in April or May 1911 and began building the dam by the end of that year or the beginning of the next. He wrote that, aside from creating the pond, “The water below the falls thus made, was sent, by hydraulic ram,1 up to a big stone reservoir built into the higher hill, just behind and above the hilltop garden. . . .” Frank Lloyd Wright: Collected Writings, volume 2, 226. The hydraulic ram gave him running water.

A photo of the dam in its initial construction is available through this link. Wright’s draftsman, Taylor Woolley, took the photo in the winter of 1911-12. It shows Taliesin at the top photograph and at least one wall built for the dam/pond at the bottom. You can see photographs of the early completed waterfall if you look at “Frank Lloyd Wright’s Taliesin: Illustrated by Vintage Postcards“, by Randolph C. Henning.

A Hydro-house Constructed for Electricity

Close to 15 years after Wright first constructed Taliesin, he took advantage of the waterfall to design and build a hydro-electric generator at the dam, which was completed in early 1926.2 The hydro-house is the little structure to the right of the falls in the photograph above. It was similar to Taliesin: it had the same materials and angle on the roof, and the same color plaster on the parapet like what you found on the stucco walls at the house. People made postcards showing it, which is how I got the image above. A former co-worker gave it to me after finding it in a box of postcards while he and his wife were at a county fair. The stucco wall you see wasn’t there for very long. I imagine that constantly being sprayed by water damaged it very quickly. However, the hydro-house machinery was safer under under the roof so the generator ran more-or-less successfully for about 20 years before Wright had it taken out.

I wrote about arranging those photographs associated with Taliesin a couple of blog posts ago. Those photos included 33 of the dam/waterfall. As those features weren’t near the building at all, I worked to figure out when the photos were taken. Sometimes the photos would be postcards that had been sent, so I could get a “taken by” date on them. Other than that a lot of times I figured out things at Taliesin by a game of “spot the difference” (like those cartoons you used to see in the newspaper on Sundays).

Bad photocopies made for interesting lessons:

Oh, and I forgot this: for the most part, I was looking at 3rd, 4th, 7th generation photocopies. So I would be trying to figure out images from what were basically blotchy dots. To give you a sense of what I was seeing, I took the scan of that dam photo and messed with it, putting it below. Actually the image here looks better than what I remember seeing (I worked to get better versions of all of the images). 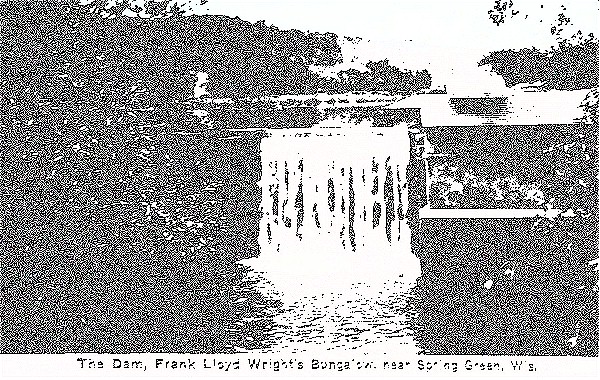 I think the initial poor quality of the images made me really work on my analytical side. And taught me to stop and start looking very closely at things – was that one stone a little bit different than one seen in another photo? Did it look like it had a few chunks taken out of it compared to what I saw before? Is there a new stone to the left of those three stones there? Is there less plaster on the wall?

The end of my work days:

I might spend the afternoon looking at three photographs, going from one to the other with a loupe, with the sound of Taliesin’s waterfall as my backdrop (the office was in an old horse stable at Taliesin). Another thing about this work (looking at stone and the size of tree branches to figure out which photograph was taken earlier or later) was trying to block out preconceived notions on what I might expect to see in an image. It’s helpful especially with Wright’s home, because Wright often had things drawn there that never existed; or would change things while the features were being built. Like that hydro-house: it looks really cool in that photograph but as I wrote above, the waterlogged plaster was probably coming off it within a week. Trying to clear my brain when I looked at spaces hopefully stopped me from wasting time on some theory.

In addition, the end of this process meant that at times when people (tour guides, visitors to Taliesin, architects, other Frankophiles) asked something about a room, I could walk them through it at different times (because I’d spent hours walking through the spaces in my head). I found myself on at least one occasion saying, “It doesn’t look like that now, but it used to.”

And most of these people have never been there when I answered “what did you do at work today?” with, “I looked at some stone. And figured stuff out.”

Here are hyperlinks at the Wisconsin Historical Society of photographs showing Taliesin’s waterfall with the hydro-house, after the removal of the parapet:

I own the postcard seen at the top of this post. I don’t know who the photographer was. They probably took the photo in 1926 or 1927.

1 A hydraulic ram is one of the many things I’ve learned about while working at Taliesin. If you’ve ever been near a hydraulic ram you hear a constant clicking sound as the water is forced up vertically. I think about that when people talk about the sounds of Taliesin. It gets pretty darned quiet at night in the country so the hydraulic ram would have a sound, I imagine, close to the sound of the ticking of a distant clock.

2 Architectural historian Kathryn Smith wrote an article with former Wright apprentice Don Kalec on photographs taken of Taliesin, apparently by Clarence Fuermann, on three occasions. One of these is a photograph showing the hydro-house. It was published in the Journal of the Organic Architecture + Design Archives and includes over 50 archival photos.