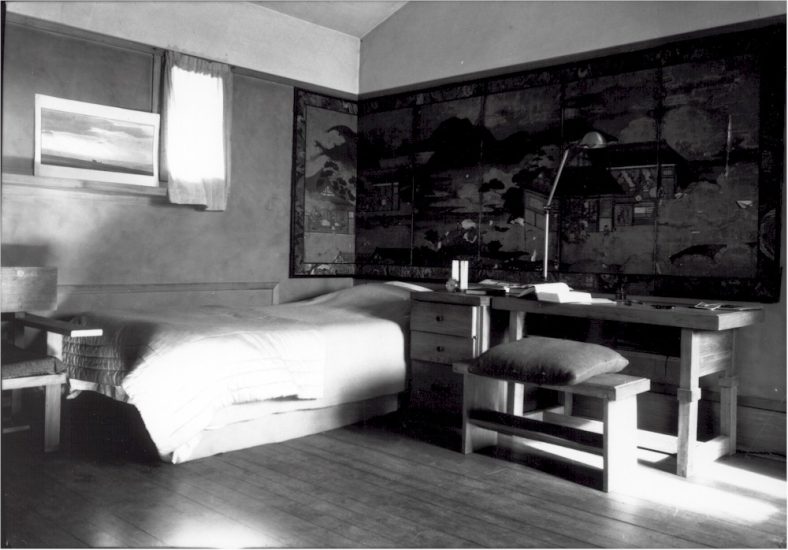 A bed in a room at Taliesin. I’ll explain why it’s here in the post below.

About what? About a photograph.

But, while I’ve been wrong sometimes about things with Taliesin, I haven’t usually communicated those things to other people.

In this case, I was wrong about a photograph I put in a post of mine from last year: “Preservation by Distribution“. While I’ve taken the misidentified photo out of that post, in today’s post, I’ll explain what the photo really shows, and how I figured out I was wrong.

The top of today’s post has the same photo I got wrong. I originally showed the photo in “Preservation by Distribution”. That post is about a generous gift from two women whose aunt, Lucretia Nelson, was an apprentice in the Taliesin Fellowship.

(read about the gift from the women, and their aunt, in the “Preservation by Distribution” post).

everything that I learned from what Nelson described remains unchanged. All I got wrong was the room that I thought photo showed. I think I figured this out yesterday.

But since learning I was wrong, it’s taking me a little while to re-think the space. Because

I’d been mistaken for 18 years.

And, since discovering my mistake, I corrected the “Preservation by Distribution” post. But, still –

Ok, fine. Then what room are we seeing in that photo?

The photograph appears to show a bedroom a couple of rooms to the west of Taliesin’s Drafting Studio. I only started to figure this out

when I was thinking about writing a new post. While I didn’t look at the photo above, I looked at photos by George Kastner, an architect and draftsman who worked for Wright in 1928-29. Kastner came to Taliesin in November, 1928 and took photographs there in that month, and in December.

If you’d like to read about Kastner, The Organic Architecture + Design Archives1 published a journal issue on some of his collection in 2019.
The article is by Randolph C. Henning, and it’s published in Volume 7, Number 3.

Regardless, here’s the Kastner photo that got this started:

This photo shows Kastner’s room at Taliesin, which had a bay window (on the right):

Although I’d never seen this room before, I knew right where this was: I was looking at part of a former carriage house at Taliesin that Wright turned into a bedroom.

Like I wrote in my post, “Guest Quarters“, Wright wanted to make Taliesin an attractive place to stay, so he converted spaces into bedrooms.

The bay window on the bedroom faced Taliesin’s Middle Court.2

I looked at another photograph of the room by Kastner. You can see it’s the same room, because of the night table that’s on the right. It has the same lamp. And the same screen is against the wall:

So looking at these two images made me realize that I was wrong about the room in the photo at the top of this post.

the room I thought was in the photograph had the same Japanese screen, but never had bay windows. So, I mentally searched for Taliesin’s rooms that had bay windows at one time. And I looked for drawings to show me the windows in the rooms.

I double- checked, and I think I found the best floor plan of Taliesin with the bay windows. It was was drawn in 1924, and I put it below.

Since the room I wanted to show is pretty small, I thought I’d show the whole plan to give you an idea of what I’m trying to show. What you see is the floor plan for several courtyards in the Taliesin complex:

I’m going to show a detail from the lower right hand side of the drawing. That’s below, with the courtyard labelled “Mid-Way”.

The drawing, published in 1925, has an archival number of 1403.023. But those who put the magazine (then book) together didn’t return the original drawing. So, the Frank Lloyd Wright Foundation gave it a number, but didn’t have the drawing.

The bay window in the photo was next to the door of the “STUDENTS BED ROOM” in the drawing.

The room has two small windows on the wall opposite of the bay windows. I think the photo is showing the window on the left in the room.

George Kastner took another photo that’s really helpful to figuring this out. This is an exterior photo that shows that wall with the two windows. That photo is below. I added an arrow to the photo so you can see where the window is:

Looking (plan) west/southwest at the north façade of Taliesin. I put the arrow into the photograph to show which window I think is showing in the photograph at the top of this post.

What happened to this room?

The final changes were made before Wes Peters, his wife, Svetlana, and their son moved in there in 1943. Apparently at that time they—the Fellowship as a whole, or just Peters and his wife—removed the bay windows.

First published May 6, 2022
The image above is at the Wisconsin Historical Society on this page.

1 Their website is: https://www.oadarchives.com/. As of early May, the site administrators were having problems with it, but I’ll take this notice off when the site’s working again.

2 Here’s where I always wanted to “correct” some guides and staff at Taliesin Preservation. Starting around 2005, guides, drivers, and other staff members began referring to a tour drop-off area as the “Middle Court”. I think that’s because this area’s right near Taliesin’s “Lower Court”. So, that’s on your left, and there’s a courtyard in front of you. But that courtyard was known (in drawings) as the Upper Court. The Middle Court was called that because it’s between two courtyards.

3 The windows are in a drawing published in the January 1938 issue of Architectural Forum magazine.