“This stuff is FUN for me”: Taliesin photographs from Frank Lloyd Wright’s lifetime. 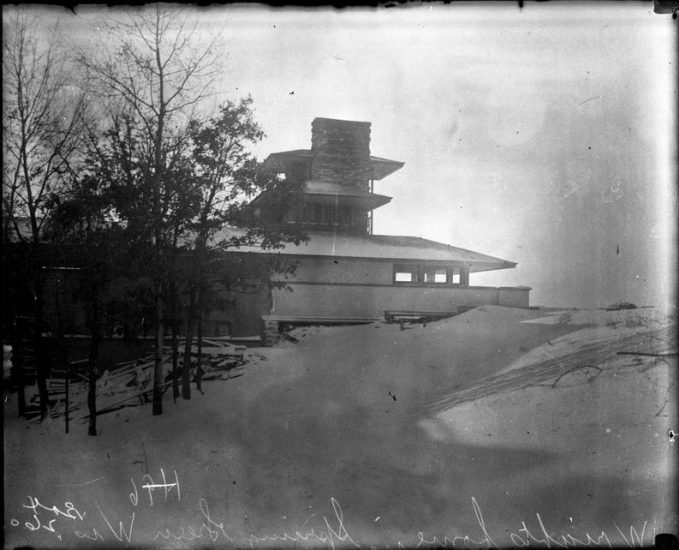 The photograph above was published in a “Flashback” article from December 4 by Ron Grossman at The Chicago Tribune: “Frank Lloyd Wright’s Taliesin was a refuge for illicit romance. But tragedy tore apart the love he built”. It’s one of two photographs taken at Taliesin on December 25, 1911. That was is published in my entry, “I looked at stone.”

That’s what I said to journalist Ron McCrea in 2010 after I’d spent my weekend looking at photos of Taliesin (he was writing about them, Wright, and Mamah Borthwick in his book, Building Taliesin, published in 2012).

What prompted this statement here has to do with the photos on this link (archived from The Wayback Machine).

The photos didn’t just capture my attention. No: I yelled in a way that they show you in movies or cartoons. It’s yelling with lots of special characters: “Holy C*$#!”

What made me yell:

The article’s two photographs—exteriors of Taliesin I (Taliesin 1911-14)—I’d only seen as dark/dusty photos, or drawings made from them.

And it appears the photographer took these the on Christmas day, 1911. On that day, Wright (and his partner, Borthwick) gave an (unintentionally disastrous) press briefing at Taliesin. They did this because they hoped to stave off public damnation. Wright thought he could do that by addressing the press.

(or the “war correspondents” as he called them, in the Day Book newspaper, on Jan. 4).

The “newspaper men” put them back on the front pages because, while they’d left their families in Oak Park, Illinois in 1909, Wright returned alone in late 1910. Everyone reading the newspapers thought Wright and Borthwick had ended their relationship.

That was not true:

Wright was in the US, but acquired land in Wisconsin to build his home. Meanwhile, Cheney was in Europe. She had to wait until she could divorce her husband based on “abandonment”.

Thus, she was Mamah Cheney until August 5, 1911, then reverted to her maiden name, Borthwick.

The “war correspondents” found the two, realized that Wright had not reconciled with wife Catherine, and descended on Taliesin.

The hope by Wright (and Borthwick) that a public statement would calm the press didn’t work out. Even though Wright said in Baraboo News (Baraboo, WI, January 4), “may not the matter be left in privacy to those whose concern it chiefly is?”, it was too late. That newspaper, on December 28, said that Taliesin was “known as Crazy House.”

I encourage you at this point, if you haven’t done so already, to click the link to Grossman’s story so you can look at the “Crazy House” photos. 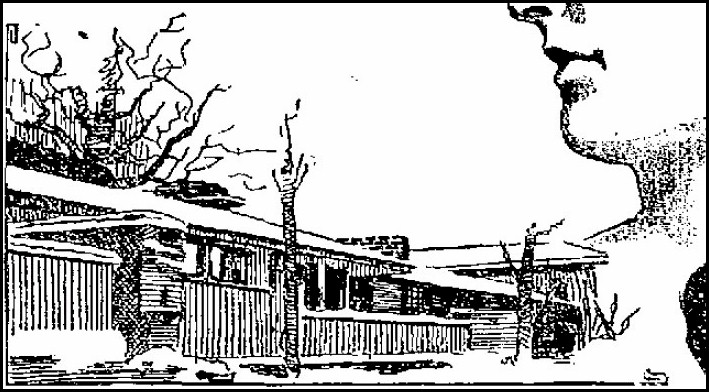 If you read the article, the first photograph, underneath the article’s title, shows the building’s northern face, with a parapet ending in a stone pier to the immediate left. I had never seen the photo before. But someone took the photo and made it into a drawing. That appeared in the Des Moines Daily News (published August 18, 1914). I put that drawing above. I think I should be ok to publish it. Given its age, it’s now in the public domain.

I wanted to show how you’d see that same part of the building today, but I couldn’t. Almost nothing in the photograph from Taliesin I (or the drawing) is the same. That’s because Wright kept adding on and changing the building. However, I say that, “Taliesin keeps its history within its walls.” So I’ll show where that history marker is, but I’ll orient you first.

A view toward Taliesin’s entry steps 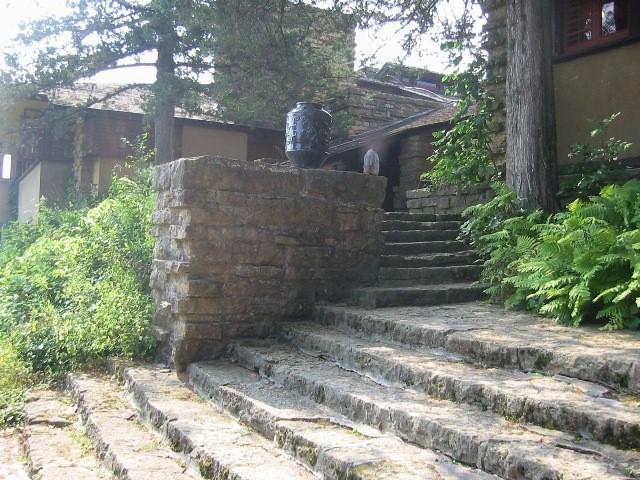 The next photo is the other side of that stone wall. That tree trunk I just mentioned is just to the right of the end of wall. 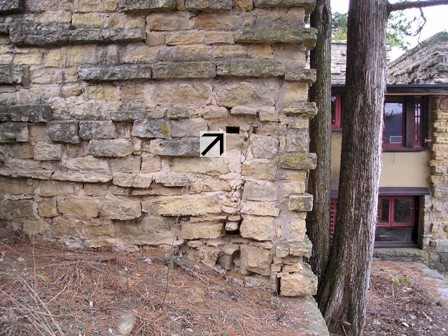 That little black rectangle you see is where the cap on the parapet terminated into the stone.

The second image in the Grossman article, near the bottom, shows that same wing (the agricultural wing) from its broad western façade. That photograph is at the top of this entry, because it first appeared in print before 1924. The images, while not being unknown to me, are probably pretty rare for fans of Frank Lloyd Wright or even Taliesin. That’s how many changes Wright made to the structure over time.

This second image (showing Taliesin’s far western facade), shows the building’s hayloft ending on the right side with a garage that has the cantilevered roof. I don’t know if the garage ever held cars since there are no photographs of cars in there and no photographs with wheel tracks leading up to the garage either. There are no close up photos of it, but you see the garage across the hill in this photo at the Wisconsin Historical Society.

Another photograph used in a newspaper article

I found this image because of a habit I had (and have). I search online for old Taliesin photographs. When I worked, I did this on my Friday afternoons after I had finished any other projects. I would type “Taliesin” and other qualifiers into a search bar to see what came up.

Note to the neophyte: make sure to narrow the search so that you aren’t seeing results regarding Taliesin West in Scottsdale, Arizona; things about the 1914 murders/fire at Taliesin; some movie out there about vampires with a character who is, I guess, named Taliesin*; and information on actor/voice actor, Taliesin Jaffe (I’m sorry Mr. Jaffe, but I’ve never seen anything you’ve been in).

One day that brought me to a newspaper article in the Chicago Evening American, published on December 29, 1911: 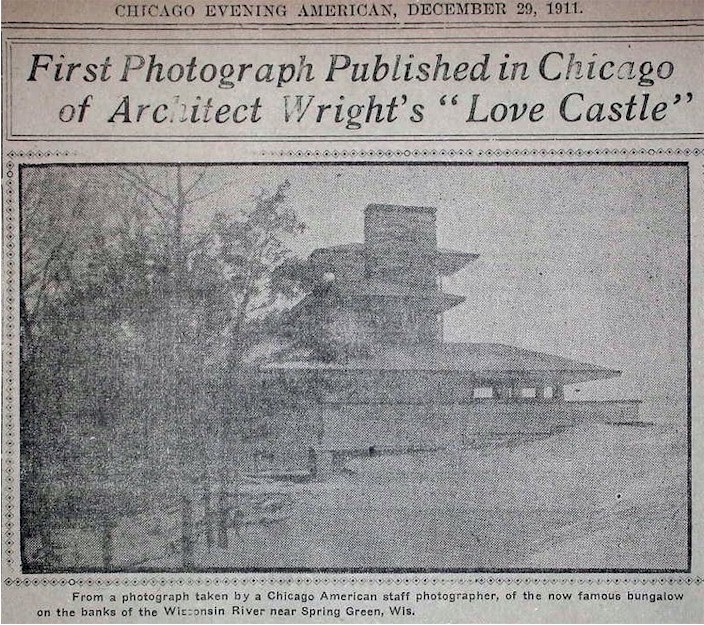 I don’t remember my first thought in seeing the agricultural wing photo, but I’m sure I was really excited. And, ultimately a little disappointed, because the photograph was muddy and a little dark and, well, just newspaper print. It’s very likely I looked at it, tried to get what information I could by scanning it, then expanded, lightened, and darkened, and gave up.

I thought that these photographs, if they existed, were in a drawer or a folder, stuck away or mislabeled. After all, I had no idea of the photo of Taliesin’s north facade existed at all out there. But, obviously, I was wrong and the original photos were NOT lost.

* Here’s part of the problem in not exploring what comes up in my website searches: “Taliesin Meets the Vampires” is not a movie. “Taliesin Meets the Vampires”—if I had taken a moment to click on the link—is a “Vampire blog” where you “will find views and reviews of vampire genre media, from literature, the web, TV and the movies.” Well, I’m glad I did that because I prefer looking at a page on a website to finding, then watching, a vampire movie.

The photograph at the heading for this post comes from the Chicago Tribune Historical Images.