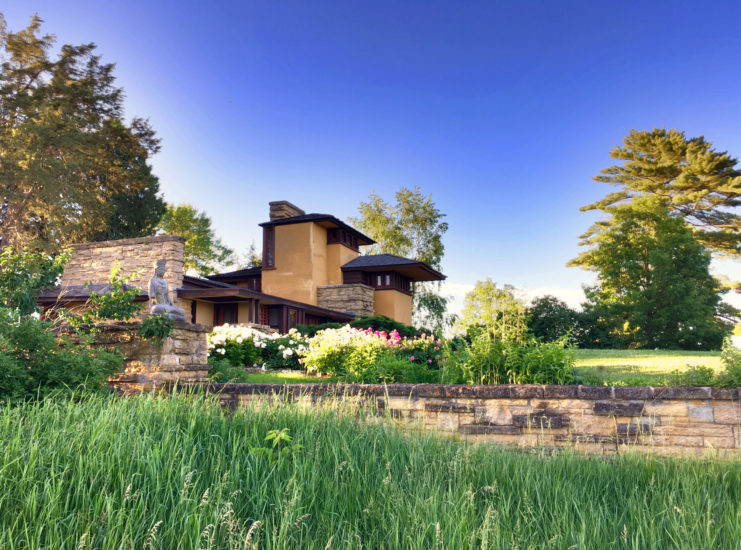 Frank Lloyd Wright, that is. Still, after the documentary about Wright by Ken Burns came out in 1998, that’s what all of my friends said to me that Christmas.

The stuff you hear about Frank Lloyd Wright

I wasn’t surprised that they said this. Let me tell you: among other things, what’s heard about Wright is that he was arrogant, his buildings all came in over-budget, they all leaked, and his furniture is uncomfortable. But working at Taliesin teaches you a lot about varying degrees of acceptance of the man and his work. I’ve seen people burst into tears while walking into rooms at Taliesin (the beauty hits at the gut level). Kids and adults will go into the first room they see in the Hillside building on the Taliesin estate and go, “wow!” Someone reminded me that people come to see Frank Lloyd Wright’s home Taliesin from all over the United States, South America, Japan, and at least a couple of countries in Europe.

And “He was such an S.O.B.” is the other side of Wright’s fame. He was in his early 40s after building over 100 buildings when he became known nationwide—not because of his genius in design—but because of a notorious set of relationships that landed him in newspapers, where he could be the subject of press conferences (as well as the murders in 1914, but that’s not what this post is about).

Wright: forced to become adept at working in mass media

Personally I think that by the time he turned 60 in 1927—after two divorces, a child born out of wedlock two years earlier, and “shacking up” with a “dancer” 30 years his junior/the future third Mrs. Wright (with whom he would spend the rest of his life)—he’d spent almost two decades as the subject of newspaper columns. I think he realized he could turn his notoriety on its head. He’d already been on the “bad” side of press; might as well use those columnists to get press that he controlled.

As for his genius in architecture, that’s too much to really get into here,1 but his buildings at times are more than the sum of their parts and are more beautiful than you can find all the reasons for. It’s a reason people have said to me that they’ve waited their whole lives to come to Taliesin. It’s also why I had an eleven year old tell me excitedly that her parents gave her a tour of Taliesin for her birthday. I think that girl had a few years before hearing the parts that could make him an S.O.B.

1 I wrote about some of his genius in “Taliesin as a structural experiment”, and “Frank Lloyd Wright Buildings are Smaller Than You Think”