In Return for the Use of the Tractor 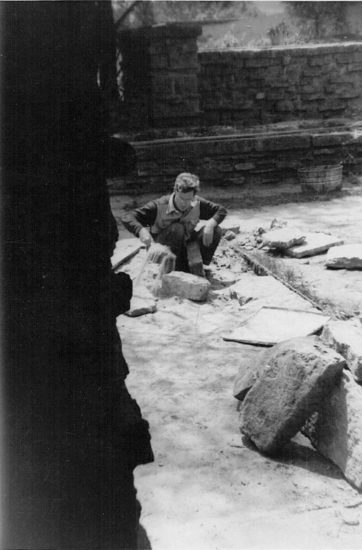 Photograph taken in 1943. From Taliesin’s Breezeway looking (plan) south at Wright’s apprentice, Curtis Besinger, sitting in Taliesin’s Garden Court, sorting through flagstones that would later be put on the ground in the courtyard.

In my goal of researching Taliesin’s history, I examined Wright’s correspondence looking for anything that might give information about changes Wright made to the building. This research uncovered something about materials at Taliesin, and that is below.

Wright didn’t write out most changes he wanted at Taliesin:

If Taliesin were built for a client, he would have written things in detail. But, he didn’t, since this was his own home. So, despite the fact that Wright lived at Taliesin for almost 48 years, there doesn’t seem to be a lot of correspondence between Wright and construction personnel, or between him and those in his office where he told them what he wanted done. I couldn’t even find things for when he was out of the country.

In contrast, when he was at Taliesin, things weren’t written down because he was there to give directions.

Some of what I did to figure things out:

Once I realized I couldn’t get information that way, I started poking around in any other direction I could. I read letters between Wright and visitors, workers, apprentices… basically, anyone I could think of who worked for Wright, or visited him at his home. Newspaper and magazine articles are good, and photographs are great, too.

For anything written, I hoped someone would mention something in a letter, like when they came this or that was being constructed or expanded. Ideally this would include a detailed description of everything in the room, along with measurements, please.

Through this method, I discovered a piece of correspondence written in April 1942, from Herbert Fritz, Jr. to Frank Lloyd Wright.

“Herb” Fritz (whose father was a former draftsman for Wright1) was born in 1915, became Wright’s apprentice for 3 years (1938-41), followed by a purchase of land near Wright’s home. Fritz became an architect and practiced almost until he died in 1998.2

Herb wrote to Wright several months after he bought that land (which he later named “Hilltop”). He was designing his home there, and the land had stone that he could work, but he needed to be able to move it.

So, Fritz offered a trade:

“In return for the use of the tractor,” Fritz wrote, “I would like to give you a cord or two of rock for each hour”3 that he needed the vehicle.

I was totally jazzed. First, this was exactly what I was hoping for. Secondly, this answered a question I’d had about Taliesin for years. I had noticed, in archival photographs, stonework changing at Taliesin in the early 1940s. So much work, that when I noticed a change I could almost count on it having occurred some time during World War II.

But I’d never come across anything that explained it.

Herb’s letter arrived when Wright was out of town, so there’s no written reply. But there must have been a verbal agreement between the two men. Nothing else explains that amount of stone and when all those changes were made.

I don’t know exactly how much stone Wright acquired through this, but it must have been quite a bit. One of the changes you can see being done is in the photograph at the top of the page: one level of stone in the Garden Court was added on top of the existing one.

The apprentice in the photograph above, Curtis Besinger, also wrote about changes in 1943 at Taliesin that were done in stone. He related these in his book, Working With Mr. Wright: What It Was Like.

The photograph shows one of the changes at Wright’s drafting studio. The south wall of the studio is to the right of the bell. It has the vertical, glass, doors. In front of the glass doors is a newly built stone patio.

Why Fritz agreed to this:

While I was totally psyched about this find, I was confused on why Fritz did it. He had to have known that Wright would take full advantage of such an offer in exchange for the use of Taliesin’s farming tractor. So, since I was at Taliesin West after this find, I asked “Bruce” Brooks Pfeiffer for ideas about it.

Bruce, former Wright apprentice who was born in 1930, noted that the request made sense because of World War II. The United States’ entry into the war began a period of gasoline and rubber rationing. Yet, because Wright’s tractor was a farm vehicle, it wouldn’t have been subject to it.

This stone from Fritz helped Wright transform Taliesin from a year-round Wisconsin residence into a home occupied mostly during the state’s warmer months. This way, Taliesin could fully convert into his summer home, while Taliesin West in Arizona could truly become his winter home (I wrote about this before, in “Did Wright Ever Live in Wisconsin in the Winter?”).

The photograph at the top of the page was taken by Priscilla or David Henken and was published in Taliesin Diary: A Year with Frank Lloyd Wright, by Priscilla Henken (W.W. Norton & Company, New York City, London, 2012), 170.

1 Herb’s father was Herb Fritz, Sr., a draftsman and one of the two survivors of the 1914 fire/murders at Taliesin.

2 He shows up a few times in the Meryle Secrest biography on Frank Lloyd Wright. In fact, he described how he saw Wright in dreams sometimes, and it’s with his memory that Secrest ended the biography.