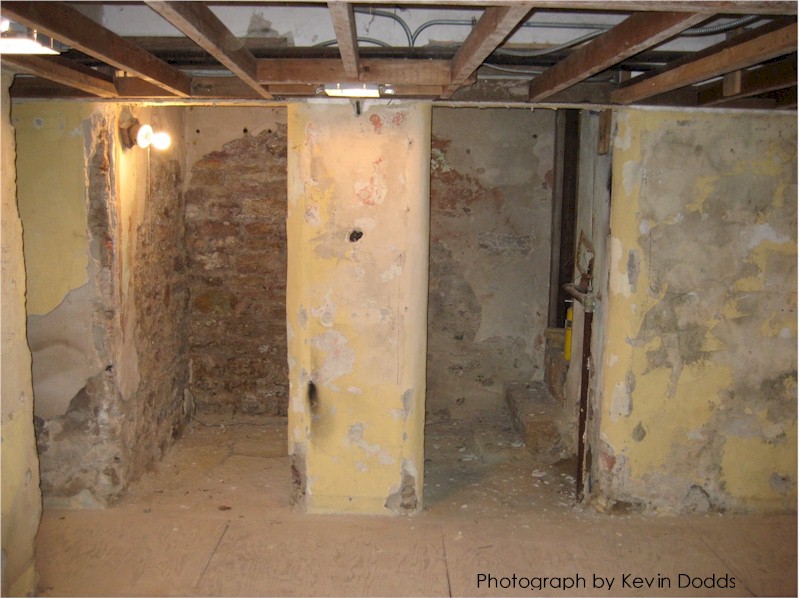 Last summer I wrote “A Slice of Taliesin“, which described some of the work done by the Preservation Crew at Taliesin. In fact, that work was about twenty feet to the left + 4-6 feet below where Preservation Crew member Kevin Dodds was standing when he took took the photograph above.

Photograph above looks at the west wall in Taliesin’s Guest Wing in December 2006.
Kevin took it after the removal of the non-historic drywall had begun.

Kevin took the photo below a few months later1 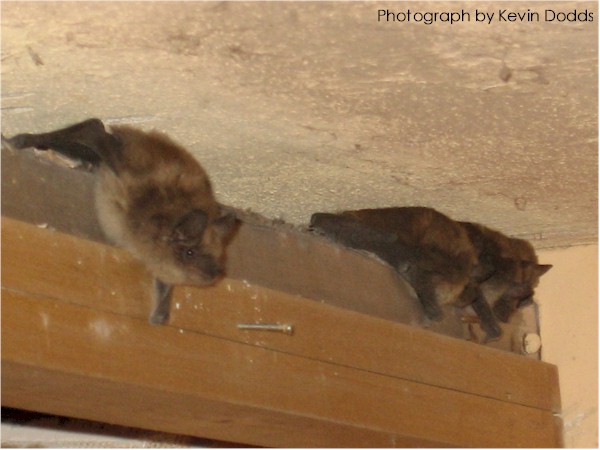 I am typing right now as far away from the screen as I can get because this photo just freaks me out.

Bats freak me out.

And it’s April, which means that the bats are starting to wake up from their hibernation. Therefore, I’m going to write today about them and about Taliesin. That’s because I did not have a phobia of bats before I started working there.

When I mean phobia

I don’t want them eliminated. And I’m fine with seeing them at a distance. But being around them when they’re flying (or when they fall on the floor, which they can’t get up from), makes me scream uncontrollably. Others will say, “Oh, come on, what’s the problem?” while I’m screaming and running out of the room.

the closest I’d come to seeing them was that scene with the bat in the movie, The Big Chill.

Since I moved to the area in the 1990s to be closer to Taliesin, I would see them flit past my face when I took walks at night in the summers. I was amazed at their echolocation. They’d fly by and it was kind of cool.

So the reaction came on unexpectedly

I believe I had my first negative reaction when cleaning at the Hillside structure later on.

“Nate” (another tour guide) and I were doing some deep cleaning at the Hillside Theater (deep cleaning was another thing I use to do at Taliesin, like I wrote about in the post, “I’m Just a Tour Guide“). We came across a bat sleeping on a wall. Nate slowly gathered the bat up so he could put it in a place away from people. I don’t know if it was the way the bat moved, or its squealing distress call.2 But as Nate kept saying, “It’s no problem, see? He’s just fine. . . “, I kept backing up, replying to him on the edge of hysteria that “it’s ok (!!!!)”

Plus, there were the House openings in April

That was done for years before there was heat inside Taliesin’s living quarters. I mentioned House openings in “Physical Taliesin History“. And more than once, the Opening crew found bats, sluggishly trying to keep warm. So, we designated Tom, a fellow House opener, as the bat catcher. One time, there was one bat that Tom found in the toilet, still alive, but it had fallen in the water.3

Apparently bats would hang on the edge of toilet rims. Most of the time they were fine, but sometimes they fell.

Tom took the wet and cold bat out of the toilet bowl, dried it carefully with a towel, and put it on a rock outside to let it warm up in the sunshine. Then he found another bat. I think it was also hanging from the rim of a toilet bowl, but hadn’t fallen in. He took it outside and put it next to the colder bat.

He swore that he looked over and the second bat had put its wing around the bat who had been wet. And when they warmed up, they flew away.

I know. But I still can’t stop screaming when I get around them.

I know. I know they all don’t have rabies. They are fascinating to watch coming out of chimneys. And I thank my little bat friends for their circumlocution around me when I walk at night. But… you know… screaming.

I also saw them while giving tours

One time, my two guests and I were in a room at Hillside. I saw a bat drop from the ceiling and fly behind them. And I didn’t even squeak.

Another time, I was the first person walking into Taliesin’s Living Room and saw a bat hanging from one of the cypress strips on the ceiling. 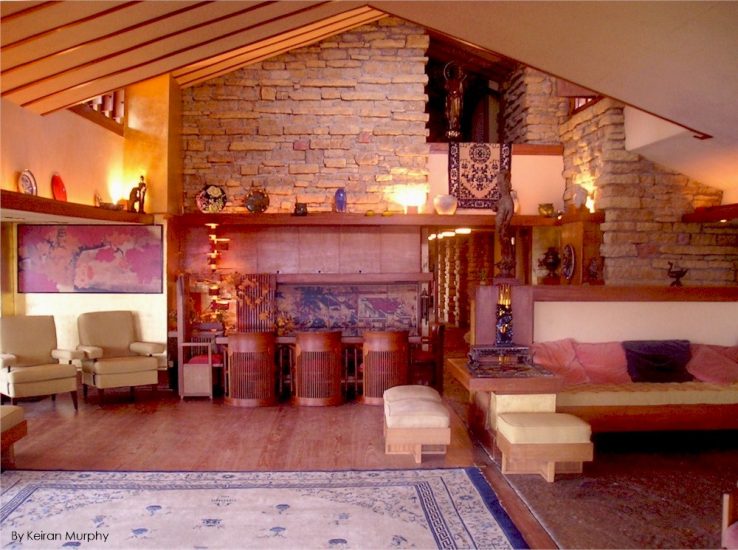 The bat hung near the top of the gable in the color photograph above.

I don’t know if anyone on the tour saw the bat (nobody mentioned it), but I did my best to speak about anything that didn’t rise above shoulder height. So I talked about the wood on the tables and the furniture’s low seats. I talked about the piano in the room, the stone on the floors, the fireplace, and the view out of the windows.

There was the story that I told on tours for my last few summers. It has to do with Terry Teachout.

Terry was the culture writer for the Wall Street Journal and died unexpectedly in January of 2022. He and I met in 2005 and became friends. He loved Spring Green, the nearby American Players Theatre, and Taliesin. He was invited to stay one night at the House by Minerva Montooth (a Taliesin resident who lived there with the Wrights in the Taliesin Fellowship).

A few days later, Terry sent me some of the writing he was doing for his post about that night in the House. He related listening to music in Taliesin’s living room (the room you see in the photograph above). He described how, at one point,

“A black bird came in, flew around the ceiling, then fluttered out. I never saw it again.”

I loved telling people on my tours that I replied, “Terry… that was a bat.”

The current state of bats on the Taliesin estate has been checked on by the Wisconsin Department of Natural Resources. As you may be aware, brown bats are having problems because of “white nose syndrome”: https://www.batcon.org/about-bats/bats-101/

The USDA on Wisconsin bats: https://wildlifedamage.cals.wisc.edu/wp-content/uploads/sites/289/2020/10/WildlifeDamage-Bat-6-2020.pdf

The Department of Natural Resources in Wisconsin did a survey of the bats on the Taliesin estate, and I found it on the Wayback Machine from February, 2017:  https://web.archive.org/web/20170315012654/http://www.taliesinpreservation.org/learn/current-recent-projects#bats

1. Mostly, the preservation crew did the work that makes a lot of noise and mess during the winter. That way, they wouldn’t bother guests on the estate during the tour season.

2. I’m very proud of myself for staying through the entire recording of the bat’s distress calls even though I imagined bat distress sounds for about 5 minutes afterward.

3. As for how there could be water in the toilets when the whole house was unheated during the winter: All of the water systems were drained at the end of the season, with anti-freeze put into pipes just in case. Then everything was filled back up in the spring.