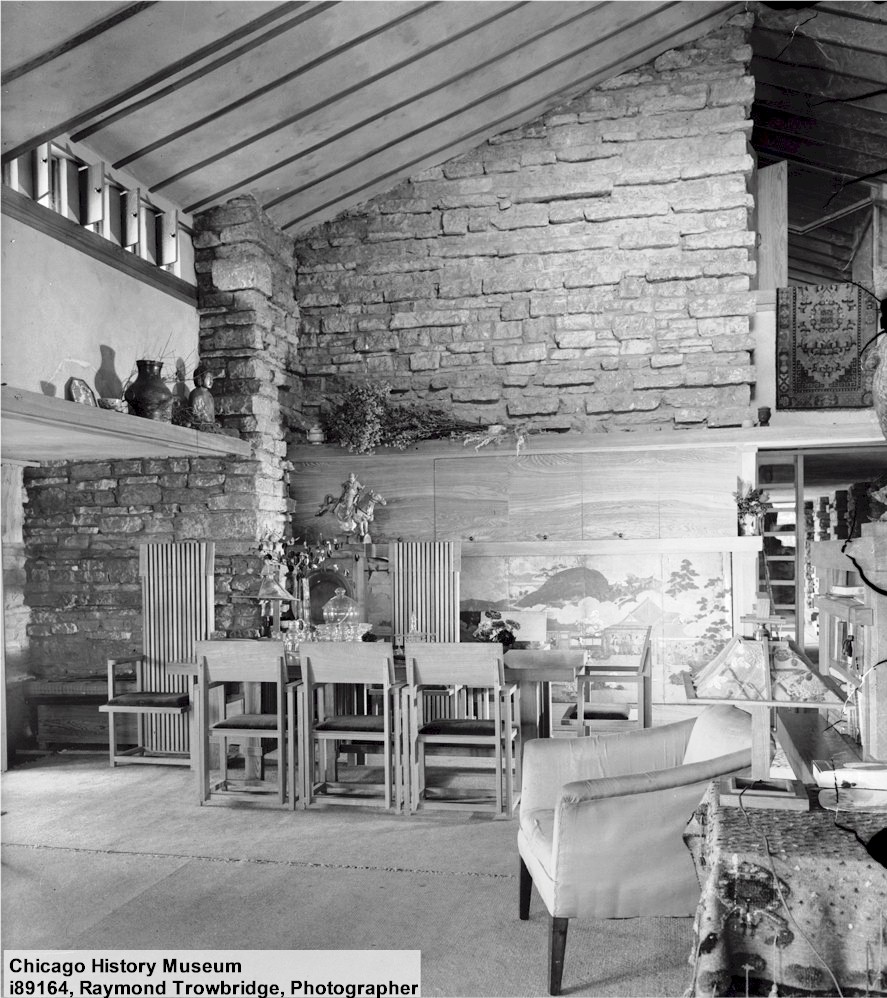 Taliesin as a structural experiment

Photograph by Raymond Trowbridge looking south at the dining area in Taliesin’s living room (read my post about Trowbridge and Taliesin here).

Taliesin in Wisconsin was Frank Lloyd Wright’s laboratory. This statement is not marketing: it’s truth. Wright experimented with materials, engineering, the play of light, colors, spatial concepts and more all over the Taliesin structure. I am not an architect or engineer, so I don’t intuitively understand the structural experiments. But I do think I understand the engineering in Taliesin’s living room—where things shouldn’t be working, but do—so I’ll write about that space here.

While there are many things to write about the space— I’ve probably thought bucket-loads—I’m nor going to address them here. Because when I start thinking about the room, I think “and another thing… oh, and also… and one more thing…” and I don’t know when I’ll finish.

In order to understand what I’m talking about, I have to introduce the basics of the room to you. Taliesin’s living room (from north to south, west to the east where its wooden floor stops) is a 986 square foot (91.6 sq. meter) rectangle. Wright initially constructed the room in 1925 after the structure’s second fire that year (its first two incarnations were in the same place, and a little smaller between 1911 and 1914). In those versions of the living room he had “tray” ceilings: like a little attic space before you got to the pinnacle.

Not so in this third incarnation. In this version you look up and you’re seeing the underside of the roof (with plaster on it). There’s a gabled section (with a clerestory) on the southern part, with the north ending in a hip (with a section with another little hip going to the northeast). Inside the room, a stone wall dominates much of the south, and stone takes up about half (or a little less) on the west side. Then there’s a stone pier in the room near the northeast corner. And all of this 986 sq. feet is without an attic or collar ties. But the attic’s not there. There’s nothing acting like the bottom of an isosceles triangle; and there’s no collar tie holding the opposite walls in place.

And there isn’t any steel. There’s only stone, wood, and plaster (with glass windows). So: what’s keeping the roof up? Why are the walls stable?

Because if the roof weighed too much, the glass windows with their wooden frames (4-by-4 feet) would crack, while the walls would splay (or lean) out. In truth, we’re not really sure what is keeping the roof in place (“we” as in those who have done preservation work at Taliesin—now the Preservation Crew within the Frank Lloyd Wright Foundation). We don’t know in part because there are no detailed plans of the roof by the architect. And, sure, while Wright could be verbose on some things, he was silent on others. Maybe because he didn’t care about those details so much.

The living room impressed the “Grand Old Man of Architecture”

Apparently, famous architect Phillip Johnson (1906-2005) also had no clue on what kept Taliesin’s living room roof up. Johnson came to Taliesin in about the year 2000. I was giving tours at that time and was told that Johnson made an appointment “just to sit in Taliesin’s living room.” I’m told that one of the staff members heard him musing to himself, while sitting alone in a chair in the room: “how did he do it?”

After having been at Taliesin for a long time and seeing people study the room, what I know is that the roof’s mass is borne through a bunch of sleight-of-hand.

How the room seems to hold up the roof:

Visible weight support comes in three places: the stone on the south wall, about half of the west wall (with the chimney), and the stone pier inside the footprint of the room near the room’s northeast corner. But other than that, there’s no obvious way to figure out how the weight is being dropped. There are summations, though. The ceiling has two decks (two horizontal shelves) on the east and west sides. The decks have trusses in them, laid horizontally. These help hold the roof in place. Also, on the inside above the decks, there are verticals; those verticals are a little section of wall on the back of the deck. The little verticals form one side of a triangle; the other two sides being formed by the roof and the soffit. These triangles lend stability.

Another sleight-of-hand is the roof sheathing. The sheathing holds the roof rafters in place and stiffens the roof against snow. And the mullions—the vertical pieces between the windows—form posts that support more weight. And the window glass (described by a former Taliesin Preservation estate manager, Jim, as a “diaphragm”) in part holds the frame together. Which you can kind of figure, but what was theorized by Jim was that Wright saw the glass as part of the structural system. Just like Wright thought of the wall plaster and the roof sheathing—it kept the wall together and held it in place but also apparently took a bit of the weight.

Taliesin retains so much of Wright’s thinking

So I think that’s what Wright meant when he wrote about organic architecture. That all the parts work together. The great thing about Taliesin is that these things for the most part still exist; they’ve not been replaced over time by someone with today’s engineering, who “fixed” what they thought to be a mistake on the part of the architect.

I really hope these things can stay as long as possible, since you still get to see and think about the architect’s thoughts on these things. At the very least, it can fill you with wonder. The stuff you can’t really explain. Or I can’t anyway. Because despite “knowing” these tricks he’s doing doesn’t stop the feeling of gratitude one gets in Taliesin’s living room.

First Published 11/1/2020.
The photograph at the top of this page is in Chicago History Museum, i89164, Raymond C. Trowbridge, photographer, collection. The image is in the public domain and a larger version from the Keiranmurphy website is here.