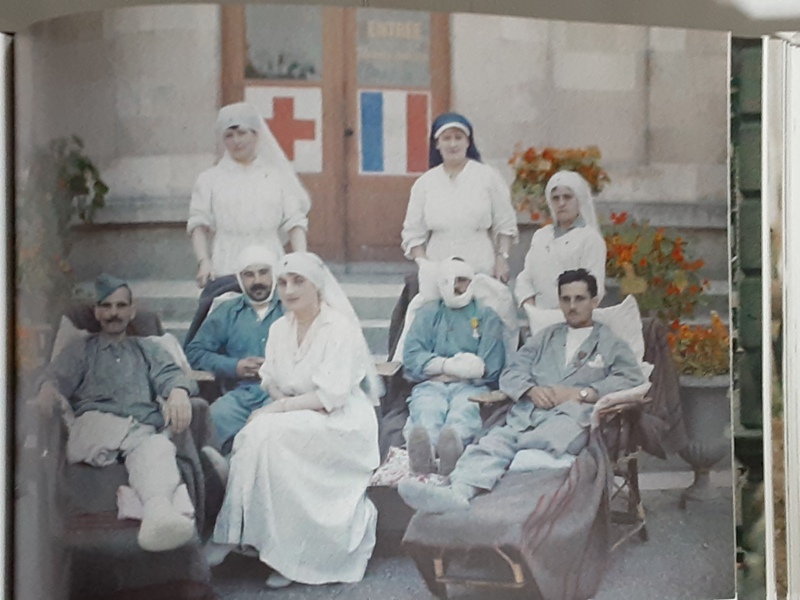 The Worst Mistake We’ve Ever Made as a Species

Caption: “Moreuil, France, 30 July 1916. Nurses Coloimbet, Louis, Egot and Flageollet pose with solders at a French military hospital in Moreuil, in the départment of the Somme. This picture was taken a month after the start of the Battle of the Somme…” A7794. Stéphane Passet.

This was my assessment about World War I after taking a class on the Dada art movement.

Dada, begun in Zurich in 1916, was, in part, an artistic, mental, and visceral reaction to World War I, a mechanized war with roughly 40 million military and civilian casualties.

Years later, I realized that, while I’d had classes on that war in grade school and high school, I barely knew enough about it to say why it was “the worst mistake” the human race had ever made. So, in 2012, I started to try to educate myself.1

I began by reading The Guns of August, by Barbara Tuchman. “Guns of August” detailed the lead up to the war and its first month of combat. The book made me realize that there were even bigger screw-ups surrounding the war than I’d ever known.

Tuchman traced all of the military preparations in the preceding 15-to-20 years before the war. France and Germany had plans that, in theory, got their forces to their destinations (the French to Berlin, or the Germans to Paris) in 3 weeks or so. The spasm would happen, and everyone would return home in a month or so, “before the leaves fall.” Not quite. As the character of John F. Kennedy says in The Missiles of October, Europe sleepwalked into the war.

How far reduced, how distant the end, no one yet knew. No one could realize that for numbers engaged and for rate and number of losses suffered over a comparable period of combat, the greatest battle of the war had already been fought. No one could yet see its consequences: how the ultimate occupation of all Belgium and northern France would put the Germans in possession of the industrial power of both countries,… feeding the German ambition and fastening on France the fixed resolve to fight to the last drop of recovery and reparation, would block all later attempts at compromise peace or “peace without victory” and would prolong the war for four more years.

The French casualties at the Battle of the Frontiers were 140,000 on the first day alone. That’s shocking to read, but then you find out those staggering numbers happened a lot.

An overview of the First World War

My next book was A World Undone: The Story of the Great War, 1914 to 1918, by G.J. Meyer (note: I recommend getting the hardcover version as the binding on my paperback was not good). A World Undone is about the whole war in both eastern and western Europe, and explains underlying currents and new technologies (and just how bad those trenches were).

Reading about the lasting effects of the war

Then I tackled the large picture of what happened after November 11, 1918. On the advice of a friend I read Paris 1919: Six Months That Changed the World, by Margaret MacMillan. This book dealt with the Treaty of Versailles.

After that I read books about art from World War I: Nothing but the Clouds Unchanged: Artists in World War I and Art From the First World War, by Charman, Terry; Alter, Jesse; Tolson, Roger (eds.). Someday, I’ll get the Dada, Surrealism and Their Heritage catalog that started me on this, which I stupidly let go after my junior year of college.

My rush of reading ended with the book, The Long Shadow: Legacies of the Great War in the Twentieth Century, by David Reynolds. The author is from Great Britain and so his focus was more on Great Britain and the Continent.

My last intentional dive was watching the original 1930 movie, All Quiet on the Western Front. It’s wonderful to see, in part because you know that those involved had recently experienced the war. If you click on the link to “All Quiet…” you come Variety’s review of the movie in 1930, which shows how the audience saw it.

Unfortunately, I have not seen the film 1917 (which was filmed to look like it was done in one take). I didn’t catch it when it came through my town one weekend in March, 2020. And then Covid-19 slapped us the next day or week, and there you go.

After this post, someone wrote in and suggested that I see They Shall Not Grow Old, the colorized documentary with footage and remembrances by World War I combat veterans done for the Imperial War Museum. An interesting perspective on it is in The New Yorker.

Here are some things from the internet related to World War I:

To increase my grief over WWI

I go to Google so that I can find and play the song “Third Light”, from the 1984 album, “Declaration” by the rock band, The Alarm. “Third Light” taught me where the “lighting three cigarettes off of one match is bad luck”2 folklore comes from. Listening to this song is not recommended after drinking alcohol, or within the depths of winter.

I believe that my original assessment on the war is correct.

I explored above how I researched and read about World War I, but I didn’t explain why I thought it was “the worst mistake we’ve ever made as a species.” The reason I didn’t is that I feel the need to keep these posts a reasonable size.

But, on reflection, I’ll add in shorthand why I feel that way about WWI: I am not the first to realize that it set the stage for everything that has followed in world history.

The photograph at the top of this post is from p. 171 of a book on the color photograph process of Autochrome. The book is Dawn of the Color Photograph: Albert Kahn’s Archives of the Planet, by David Okuefuna.

1 If I’ve not said it before I’ll write it here: I am sure that I am mostly ignorant of the best assessment out there, and the books and web pages/websites I’ve noted or listed go nowhere near the heart of World War I. I hope that these noted books, and linked to webpages, give you information you haven’t found before.

I used to smoke. I was a kid. Or younger, anyway.