Taliesin is in Wisconsin

In my post last week I wrote about how sometimes people think that Taliesin is not Frank Lloyd Wright’s home, but is actually the House on the Rock, a house which is a Wisconsin attraction that sits seven miles away.

Well, and other things can get confused in relation to Taliesin. Why is that?

That’s because there’s another Taliesin.

Well, when I say “another Taliesin”, it’s not like there’s another building that looks just like Taliesin sitting out in a temperate, hilly landscape (like Taliesin in Wisconsin). I mean that there’s a structure with the name “Taliesin”. That’s Wright’s winter home, Taliesin West, in Arizona.

In fact I wrote about Taliesin West a while ago, in my piece, “Did Wright Ever Live in Wisconsin in the Winter?”

First of all: Thanks!

One is in the Midwest, Wisconsin; and one is in Arizona (Scottsdale, actually). Wright called the one in the Midwest “Taliesin”, “Taliesin North:, or “Taliesin of the North”. On the other hand, the structure in Arizona, during its early years (in the 1930s and ’40s), was sometimes called “the Camp”. However, ultimately, Wright named it Taliesin West.

Now, you look at the photographs at the top of this post (showing parts of the two Taliesins), you can see they look very different from each other.

That’s because Taliesin West was made to be lived in during the winter in the desert. And, while it has his living quarters, and a drafting studio, kitchen, etc., it has thick concrete walls (to soak in the heat during the day). You can see part of it in the photo below: 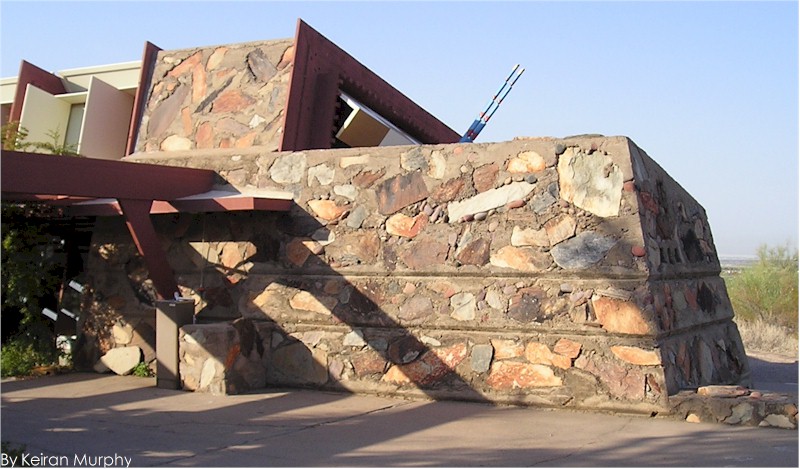 The grey is all concrete, with the flat part of the local stones placed against the outside so that they face out. This way of working with the concrete, invented by Wright for Taliesin West, is called “desert masonry”.
I took this photograph in 2007.

Wright’s apprentices in the Taliesin Fellowship (most of them unskilled) could build the structure fairly easily. And, since it was usually sunny and warm in the desert, the building had a lot of canvas roofs. So, despite the dust (which happens a lot) or rain (which happens a lot at times of the year), Wright didn’t put windows onto the building until the mid-1940s.1

As a result of these things (thick concrete walls, canvas roofs, no window glass), Taliesin West was originally like a desert camp.

Yet, the two Taliesins can still cause confusion:

Taliesin West, in ways, has become more well known than Wright’s Wisconsin home. I think that’s because it is close to the larger population of California. Besides, Wright started it when he was reaching the busiest part of his career. By the late 1930s, he had built Fallingwater in Pennsylvania, and made the cover of Time Magazine.

Therefore, while they would show up in Arizona. Simultaneously, tour staff in Wisconsin waited for the person to show up for their reserved tour.

I looked down at the book and—right there—it said the same thing.

Obviously, I had seen what I wanted to see.

Regardless, to help stop the confusion at Taliesin, the staff taking tour reservations in Wisconsin came up with a plan. They answered the phones with

This really cut down on those calls from Arizona.

However, it still didn’t always work, as it turned out in something that happened with me.

Now, I sometimes spoke to members of the press as the historian, and had done presentations. Sometimes I spoke about our tours, or gave presentations on Taliesin’s history, or talked about how we reacted to the book Loving Frank being released, or to the events on Taliesin’s 100th anniversary.

The bread and butter stuff.

But, there was this one time:

I was scheduled for an interview in September 2012. The interview would be put on audio tape and broadcast later. The interviewer called a few days ahead of time to confirm the basic information, etc.

She and I were closing up this prep phone call, and she mentioned how glad she was that we could schedule this. Because, “Well, I’m going to be out in Scottsdale for a wedding anyway, so scheduling this seemed perfect….”

“I’m sorry – did you say Scottsdale?”

Once we established that she expected to do the interview in Arizona, I had to tell her that, no, we were in Wisconsin. I believe I asked her if she had heard the tour staff answer the phone with “Taliesin tours in Wisconsin…” She kept hearing us say that, but apparently didn’t take that in. Therefore, for the entire time, she thought she was arranging to come to Taliesin West, in Scottsdale, Arizona.

I gave her what information I could. Hopefully she did ok, because I didn’t have the media person at Taliesin West on speed dial.

While writing this post, I looked for what I remembered about the Taliesin Preservation website at that time on the Wayback Machine (remember I wrote about that a few weeks ago). With this handy tool, I searched for an archived version of Taliesin Preservation‘s website.  When I compared the archived website pages from August 2012, to October, 2012, I saw that, by October, the words “Spring Green, WI” have been added to the header of every page of the site.

Here’s the page from then: 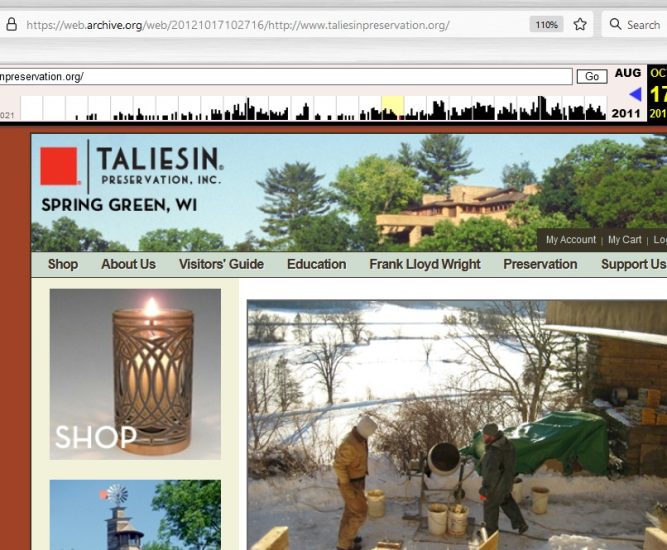 I don’t know if this eliminated the problem, but there comes the point where you do everything you can.

I took the photograph of Taliesin West in the middle of this post in 2007. That was the trip I took when I realized that going to Arizona in July isn’t really worth what you save.

1 “mid-1940s”: a transcribed letter shows the glass came in 1945. On March 1 of that year, Frank Lloyd Wright’s wife, Olgivanna Lloyd Wright, sent a letter to “Jack” Howe’s mother (Jack was John H. Howe, in the Taliesin Fellowship). In the letter, she writes that “today or tomorrow, the glass is coming!”

Thanks to the Administrator of Historic Studies at the Frank Lloyd Wright Foundation for this information.