Anna to her son 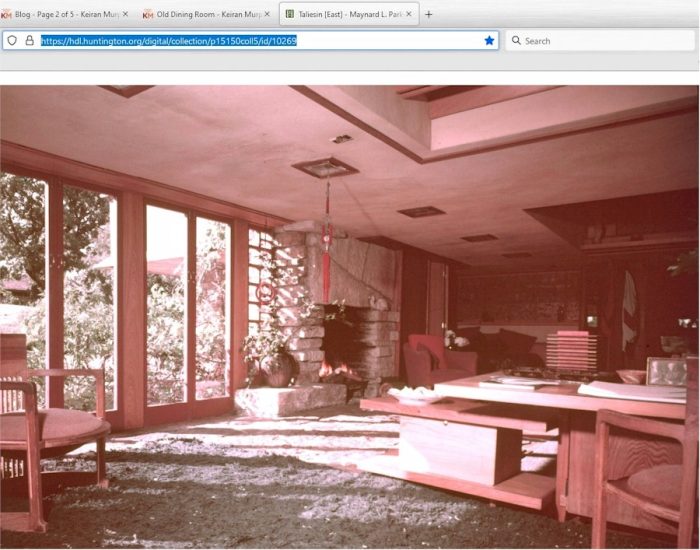 Color photo taken in 1955 in Wright’s bedroom at Taliesin. There’s a framed photo on his desk, near the barrel chair.
It shows his aunts (Jennie and Nell Lloyd Jones) on the left, and his mother on the right.

Anna, as in Anna Lloyd Wright, Frank Lloyd Wright’s mother. This post is about Anna in general, but also whether or not she ever lived at Taliesin.

Although, I won’t give a deep analysis on how the architect felt about his mother, or vice versa.

Anna (first named Hannah) Lloyd Jones was born in Wales in 1838 and died in Oconomowoc in eastern Wisconsin in 1923. Wright wrote about her in his autobiography, saying that:

“…. Although she believed Education the direct manifestation of God…, Sister Anna loved—Beauty.

Soon she became a teacher in the countryside, riding a horse over the hills and through the woods to and from her school each day.”

She made choices that had a strong effect on her son’s career. In 1876 she went to the Centennial Exposition and discovered the Froebel Gifts.

I wrote about them when I gave history of Hillside on the Taliesin estate.

The Froebel Gifts were an essential part of the new kindergarten method of teaching, and Anna took classes on how to teach her children to use them. They’ll affect Wright’s designs and, he wrote later that, “The smooth shapely maple blocks” of the Gifts, would “never afterward” leave his fingers. “[S]o form,” he wrote, “became feeling….” [Frank Lloyd Wright, 111.]

The first summer the family moved back in Wisconsin (1878, the year Wright turned 11) and lived in Madison. Anna sent her son 45 miles west, to “The Valley” outside of Spring Green where her family lived. Wright lived and worked at Uncle James Lloyd Jones’s farm. As I wrote in “Wright and Nature”, the architect vividly wrote about his memories in The Valley. He wrote that life in The Valley taught him “how to add tired to tired and add tired.” And that he was to learn,

In spite of these good things, I’m ambivalent about Anna. Did she follow him around too much? Did she put him on too much of a pedestal that leaked into how he felt about himself? Was she abusive to her step-daughter Lizzie?

Why am I bringing this up now? I’m bringing her up because, when we went to Arizona last month,

I read some of her letters.

In December, I read transcriptions of some letters to I look for those things about Wright’s mother as she lived at Taliesin.

Here‘s I wrote about that trip.

I did this because, while I’ve been told over the years that she lived at his home, I wanted to check. That’s because being told things doesn’t always make them true. After all, when I gave tours I was told by a visitor that “my guide at [another Wright site] said that Wright had designed Taliesin with a room for both his wife and his mistress.”

In reply I [HOPE] I said: “His wife and his partner, Mamah Borthwick?” … coz you have to use that vocabulary in order to change the narrative … “No, I’m sorry I don’t remember seeing that in any of Taliesin’s drawings….”

In her biography on the architect, author Meryle Secrest mentioned Anna living at Taliesin. Secrest wrote that Wright contacted his sisters (Jane and Maginel) about the problems that caused. But Secrest didn’t quote from the letters. Given how people can misread and misunderstand, I wanted to check.

At Taliesin West, I got a chance to look at some of the letters that Anna wrote to her son after he started Taliesin. I read some of what she wrote while he was in Japan working on the Imperial Hotel. And I made notes that do show that she was living at Taliesin while he was away from his home. Of course the problem with that is, when she and her son lived at the house, there was no reason for Anna to write him.

I’ve not found anything written by Anna where she described exactly in which room at Taliesin she lived, or what built-ins the room had, or what colors were plastered on which colors.

No, unfortunately, when she wrote to her son, Anna sounded like a normal human. She didn’t write like she was writing for some historian a century later. I mean, really: she wrote to her son and his companion, Miriam Noel, on March 16, 1917 that she was had been found on the floor “in the hall from my room”, but still didn’t mention which was “my” room.1

Yet, in that letter on March 16, Anna did write something interesting. She told her son to allow a new draftsman at Taliesin to live, instead, “in the house on the hill….”

I know what that means

The “house on the hill” is the part of Taliesin that had a kitchen, storage rooms, and the larger dining room.2 The photo below shows this area at Taliesin. It’s a postcard that former apprentice Edgar Tafel owned. He said it was taken 1917-18:

The apartment that Anna mentioned was on the left in the photograph. The kitchen was at the base of the chimney on the right. Today, if you were to walk past this, you wouldn’t be able to see the room that held the kitchen.

(besides, you can’t walk there because it’s private property and people live there)

But you wouldn’t be able to easily see the room with the old kitchen because Wright added a dining room, blocking most of that view. Sometime after this photo was taken, Wright would add the dining room that he walked out of in 1925 to see the fire at his house (read my post about the fire, here).

First published January 8, 2022
Image screen-grab at the top of this post is by Maynard L. Parker, photographer. Courtesy of The Huntington Library, San Marino, California, from the webpage below:
https://hdl.huntington.org/digital/collection/p15150coll5/id/10269

This photograph on his desk is one of the only ones that Wright had in his home.

1 The letter was written March 16, 1917, but I couldn’t find the microfiche number for it.

2 This is where knowing the building well helps out. I read this letter that Olgivanna wrote to Maginel in May 1932. It’s published in Frank Lloyd Wright’s Monona Terrace: The Enduring Power of a Civic Vision, by David V. Mollenhoff and Mary Jane Hamilton (University of Wisconsin Press, Madison, 1999), 82. In the letter Olgivanna wrote:

We are in desperate condition. The Sechrests have shut us out of the hill – nailed all the doors leading to their part, dining rooms, kitchens, storerooms, waiting for money we owe them (three months salary)…. We are cooking and eating in the kitchen below.