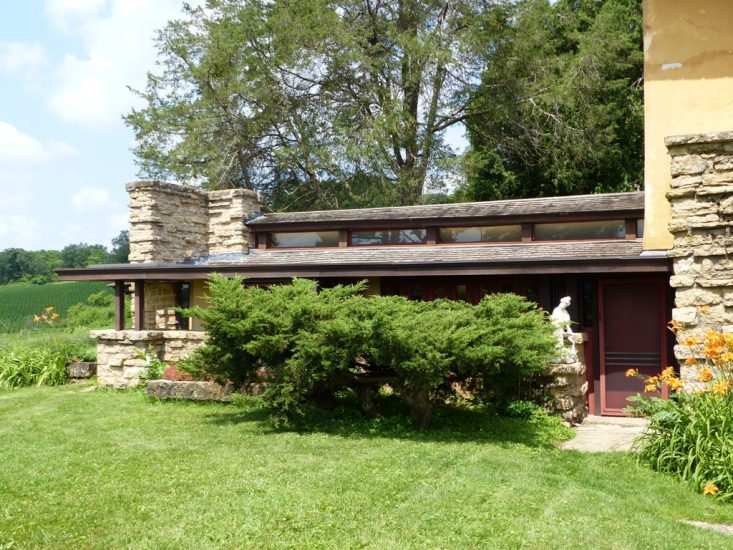 The photograph above shows the dining room areas, first built before 1920, then used by the Wrights and the Taliesin Fellowship. The area dining rooms were on the left, with the kitchen located behind the tower on the right.

I have had the goal of figuring out the history of Frank Lloyd Wright’s home, Taliesin, for awhile. Well, a lot. It’s almost like it’s, I dunno, a career or something.

And, I’ve written about figuring out Taliesin’s history in this blog here, and here, and a few more places.

Regardless, come along with me while I talk about how I figured out something because of photographs and what others wrote.

The old Fellowship dining room at Taliesin is a simple example.

That’s the dining room Wright was exiting in 1925 when he saw that his home was on fire:

… [O]ne evening at twilight as the lightning of an approaching lightning storm was playing and the wind rising I came down from the evening meal in the little detached dining room on the hill-top to the dwelling on the court below to find smoke pouring out of my bedroom. Again—there it was—Fire!

Below is a photo from the Wisconsin Historical Society, taken prior to that day:

The door he was coming out of was to the left of the stone pier. You can’t see the door because it’s behind all of that foliage.
https://www.wisconsinhistory.org/Records/Image/IM38788

There’s a tree coming out of the roof on the left hand side of the photograph. That tree was there for close to a decade (don’t worry: the tree didn’t stand inside a room).

Taliesin’s second fire happens in 1925, then, after ups and downs in his career over the next seven years, Frank Lloyd Wright and his wife, Olgivanna, founded the Taliesin Fellowship in 1932. The apprentices in the Fellowship did a lot of work at Taliesin in the 1930s so they could have places to live and eat.

(I wrote about one of them, Edgar Tafel, and his book, Apprentice to Genius, in this post).

Here are the changes in the dining room in the 1930s:

Eventually, the main Fellowship dining room was at Hillside. But, in those early Fellowship years, while the group still ate at Taliesin, Wright added a chimney with two fireplaces to the existing dining room. Abe Dombar, then a Taliesin Fellowship apprentice (along with his brother Bennie; they both became architects) mentioned this in his “At Taliesin” article on March 23, 1934:

….  Additions were made… and the little dining room soon grew to be the big dining room.  The apprentices that were there helped to make it grow.  The low ceiling of the old dining room now projected out into the new part to form a deck….

And then they built a corner fireplace on the far side by the windows.

The chimney mentioned in Dombar’s article is seen in an aerial photograph from the Wisconsin Historical Society, below:

The chimney stands on the far left-hand side of the photograph, to the left of the tree.
Wisconsin Historical Society, ID 38757. The image is online here.

Then, in 1936, Wright invited young photographer, Edmund Teske, to live at Taliesin as the Fellowship photographer. Teske’s photos also show the tree.

In 1937, photos were taken for Architectural Forum mag

On preparation for an issue of that magazine devoted to his work, that fall, Wright dispatched young photographers Bill and Ken Hedrich (of the photography firm, Hedrich-Blessing) to photograph Taliesin and his other recent work. This magazine issue was released the next January. Among other things, that issue of Architectural Forum included unique photographs from the Taliesin estate, as well as the Johnson Wax world headquarters, and that little Wright building known as “Fallingwater”.

During his session, Ken Hedrich took a distant photograph of Taliesin, which showed the building without that tree in the roof. I don’t have that one to show, but here‘s a photograph Ken took on a roof looking over a courtyard with the dining room in the background. It ends at the chimney, and has no tree through the roof.

So, I’m figuring this stuff out: “Ok, the chimney’s built, then the tree is eliminated. Got it.”

Around that time, I grabbed another piece of writing. This is the book, Working With Mr. Wright: What It Was Like, by Curtis Besinger. He wrote about his years in the Taliesin Fellowship (1939-43; 1946-55).

Besinger on a change to the dining room in 1939:

He was involved in this during his first fall in the Fellowship:

I was also involved in one other construction project that fall, a remodeling of the Taliesin dining room…,

One morning, having finished his breakfast in the nearby little dining room, Mr. Wright1 came into the Fellowship dining room and announced that he wanted to put a clerestory in the ceiling to let more light as well as the morning sun into the room…. He directed some people to start knocking off the plaster on the ceiling along the east side of the ridge…. He made a rough drawing to indicate how he wanted the clerestory built….

Curtis Besinger. Working with Mr. Wright: What It Was Like (1995; Cambridge University Press, Cambridge, England), 26.

Even though he wrote his memoir years after his time at Taliesin, I trust Besinger’s memory on when this construction took place. That earliest experience at Taliesin makes a strong impression.

Here’s the conclusion to this information:

By looking at things written contemporaneously (as well as in memoirs), and by using definitively dated photographs (the Teske and Hedrich-Blessing photos), I was able to figure out when the chimney was built (1932-33); then when the tree disappeared (1936-37); then when the clerestory was constructed (1939).

The image at the top of this post is published online at https://commons.wikimedia.org/wiki/File:Taliesin_Exterior_21.jpg. The image is licensed under the Creative Commons  Attribution-Share Alike 4.0 International license.

1 While it’s slowly changing, people who knew him and worked with him referred to him as Mr. Wright. I was taught that specifically when I started giving tours. But, as I was completing grad school at that time, I carried the lesson on referring to an artist. First introduce them by their full name and thereafter just use their last names. I tried to call him “Frank Lloyd Wright” otherwise, but I can’t guarantee it.