Curtains at the Hillside Theater

Standing in Frank Lloyd Wright’s Hillside Theater looking east at the curtain. I took this photo in 2007.

I’m excited1 to write about the curtains at the Hillside Theater today for a couple of reasons.

1: I can show a few photos of Hillside’s original theater curtain. And,

2: I get to give you one of my theories on the curtain.

Original curtain? What original. There was more than one?

Why, gosh, so glad you asked. There have been two made for the Hillside Theater. The first one was destroyed.

I did a nice write up on the first theater in my “1952 Fire at Hillside” post. It’s got cool photos and a drawing!

Like I wrote a while ago, Wright designed Hillside in 1901 for his aunts, Jennie and Nell Lloyd Jones,2 and their Hillside Home School. The building was built 1902-03. What became the theater was originally the school’s gymnasium.

The Hillside Home School closes in 1915.

Yes, I know: he paid some debts. The man was full of surprises.

As I used to say on tour:

After that, he was too busy to do anything with the building because he was working. Then, in the late ’20s, he had lots of time (no work). But you know that also means: no money.

Regardless, 17 years after the Aunts closed the school, Frank Lloyd Wright and his wife, Olgivanna started

The Fellowship was due to open on October 1, 1932.2 The month before that, Wright persuaded ladies from a local church to sew a curtain for his planned Hillside Theater. Spring Green’s newspaper, the Weekly Home News, wrote about this on September 22 of that year:

Members of the Congregational Ladies’ Aid are taking an active part in the preparations for the opening of the Taliesin Fellowship.

The ladies assign themselves to groups of twelve and sew on the theatre curtain afternoons at Taliesin. The work consists of appliquéing material on the stage curtain according to an attractive design made by Frank Lloyd Wright….

Here’s the curtain they were working on:

Wright hoped for over 70 apprentices that first year. I hate to break it to you, but Wright was a little too optimistic.

Although they did get 23 apprentices that first October.

And the curtain done by the Congregational Ladies Aid didn’t get put to work a YEAR later. That’s because the theater (named the Playhouse) opened on November 1, 1933.

Getting a view of the curtain is tough, because most photos show the curtain open. It drives Frankophiles (including myself) crazy.

Or at least it used to.

Drive me crazy, I mean.

Then I started going to Wright’s archives. At that time, they were at his winter home, Taliesin West. Every time before I went, I wrote to the Assistant Director of the archives about which specific photo collections I wanted to see on my trip.

I kept a running list of collections that I would request.3 Actually, I still do, if anyone wants to invite me to Wright’s archives at the Avery.

I scanned as much as I could, and got a few scans of photos showing the old curtain in full. 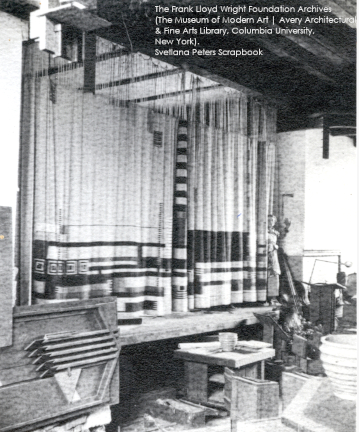 And then that fire happened at Hillside in 1952

NO WONDER the guy said, “All my life I have been plagued by fire.”

After the fire, he designed the curtain in the room now.

When we started tours, all of us had to learn the interpretation of the curtain.

I used to tell people:

as far as I know, it’s the only major design that Wright ever did that shows something that actually exists.

In other words, it’s not something abstracted: it’s a picture. It’s Taliesin on the hill.

Here’s a shortcut of what the guides had to learn:

But here’s the thing

None of this works if you abstract the Wisconsin River, the hill, or Taliesin. All those things are there, but it doesn’t go left-to-right like that.

So I wondered about this for awhile. Then, one day decades ago while I was cleaning in Hillside [yes, I used to do that, too] I realized that

The curtain’s image works if you turn it backwards.

When I thought about this while at work, I remembered something I’d read years before in Art History classes… something about tapestries. This matches what I read on them. It’s from the Met Museum:

Making a Tapestry—How Did They Do That?

by Sarah Mallory
….
Historically, weavers worked while facing what would be the back of the tapestry. They copied with their colored weft threads the tapestry’s design. The design, referred to as the “cartoon,” took the form of a painting—made on cloth or paper, the same size as the planned tapestry. This cartoon was either temporarily attached to the loom, flush against the backs of the warp threads, and visible in the gaps between the warps; or it was hung on the wall behind the weavers, who followed it by looking at its reflection in a mirror behind the warps. Because weavers copied the cartoon facing on the back of the tapestry, when the piece was finished, removed from the loom, and turned around to reveal the front, the woven image on the front of the tapestry was the mirror image of the cartoon shown. Weavers could avoid this reversal of the design by using the mirror method to copy the cartoon’s design. 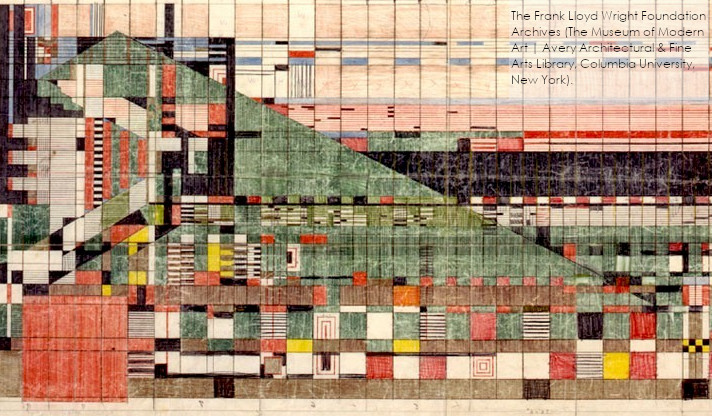 The design has the hill crown. You can see it best in a Taliesin II photo:

Looking north at Taliesin, 1920-24. On the far left is a workman’s apartment. On the far right are Wright’s living quarters. You can’t see Wright’s studio and other apartments for the workmen because the building wraps around the hill the other side of the hill.

I don’t know if Wright was thinking of a tapestry when he drew the design for the curtain, but it does make sense. In the curtain, you can see the top of the hill. You can’t see that if you’re looking at Taliesin from the other side from what you see in the photo above.

So was he thinking about the design backwards?

Possibly. Since working on this post I’ve had to remind myself which way the curtain hangs because I keep getting turned around. Makes me very glad that I learned “left” and “right” in kindergarten.

Although I did ask the Administrator of Historic Studies at the Frank Lloyd Wright Foundation about my “tapestry” theory. She seemed to “get” what I was talking about, of the curtain being the mirror image of reality, but she said that Wright did not design the curtain as a tapestry. According to Indira, Wright asked “his friend Dorothy Liebes if she could weave it,” but it was too big. So it was done the way it stands at the Hillside Theater.

First published October 17, 2022.
I took the photograph on the top of this page.

2 Some “early birds” – William Wesley “Wes” Peters, John “Jack” Howe, Yen Liang and Edgar Tafel arrived earlier that summer. Tafel wrote about the early time in Apprentice to Genius, the book I recommended a year ago.

3 I made trips 6 times in as many years. TPI paid for some, but at least half were on my own dime. I did it for work, but also for myself. I wanted to see these things and learn them. PLUS! I got to hang at T-West often in the winter – who needs a fricking vacation when they’ve got to see Frank Lloyd Wright’s buildings, and his letters and drawings, and photos of Taliesin by others?