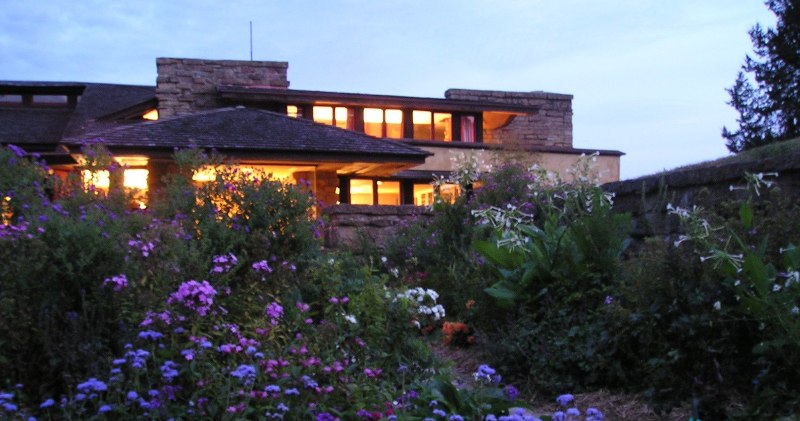 This idea resulted in the exhibit Frank Lloyd Wright: From Within Outward, May 15-August 23, 2009. I was surprisingly involved in it, although I was not, strictly, involved at all. I was not asked to contribute anything, but we worked with those writing and researching for it. If you look at the acknowledgements in the exhibition catalog, you get a sense of those actually involved. And of course I was really happy to give my knowledge to others. A real exhibit in a big museum!

In 2008 I remember working with two people:

Professor Richard Cleary came to Taliesin while researching what would become “Frank Lloyd Wright and the Romance of the Builder”, his essay in the exhibition catalog for From Within Outward. Cleary, the Professor and Page Southerland Page Fellow at the School of Architecture of the University of Texas at Austin, traced Wright’s interest in building techniques, and with specific builders at Taliesin and other projects.

I remember walking around with him, and pointing toward specific mortar work. He found the names and resources I came up with interesting, but unfortunately I can’t remember it all.1 I was thanked, though. My name is in footnote 18 of his essay, and it’s spelled correctly! (That’s a problem for a woman named Keiran.)

That September I assisted photographer, David Heald. He has worked for the Guggenheim since 1981 and came to Taliesin with his assistant to get photographs at Taliesin and Hillside.

Actually, I wrote that “I” assisted Heald, but that’s not really true. A woman in our organization (who worked with the press) had the most interaction with him. She started her day with him at maybe 6:30 a.m. I tagged along starting at around 7. It turned into a 12+ hour day (just for me). Heald, his assistant, and Becky and I went into spaces and moved things around for him (particularly important artifacts). When he took the photos he would invite us look at his work.

Near the end of the day, Heald and his assistant set out lights strategically. At dusk, they lit Taliesin up so he could take more photographs. While he took more photos, I clicked away on an “aim-and-shoot” camera while I sat on the ground. One of those photographs is what you see at the top of this page.

Heald’s work informs me when I’ve told people not to bother taking photos on a tour: I watched him—a man with (now) over 40 years in professional photography—spend over an hour getting each photograph.

The last part of the work for the exhibit includes my Taliesin knowledge:

Lastly, I consulted with the firm constructing models for the exhibit. One model showed the Taliesin estate, and its changes in ownership over time. The people in the firm worked really hard & fast. Their model had a map projected over it, showing the change over time on the 600-acre2 estate. That model is shown on this video (the model is at 2:22 min. and 3:01-3:13 min.).

Like I said, they were working really hard, starting in January (for an exhibit that opened in May). I threw information at them (photographs, Plat maps, etc.) and came to expect long emails with lots of questions from them at the end of my week. At one point, I almost wrote in an email: “Oh, dear: you’ve never worked in a non-profit organization, have you?”

The last, large interaction came when one of the staff members sent what he thought was a pretty good floor plan of Taliesin II. That was forwarded to me and I started figuring out its problems.

How I spent my night with this:

After receiving the drawing, I spent most of that evening carefully laying out what, in his Taliesin II drawing, was simply wrong. I saved my copy of that plan, below. And it’s color-coded!:

This drawing was based on drawing Taliesin II, #1403.018 (seen at ARTSTOR, here). Wright’s living quarters in this drawing are on the right hand side.

My color-coded analysis of the drawing must have done something right: I never heard from the man again. Nor did the floor plan make it into the exhibit. Of course, he had sent this out on, like, April 20 (with an exhibit opening on May 15) so that might have been his shot in the dark.

I regret to say that I didn’t make it to the exhibit. Even though I was told there was an invitation for me on opening night (and I had a friend agree to let me stay at his apartment in Manhattan), information or something got dropped somewhere along the line and I couldn’t nail down whether my name was on a list of those formally invited. This confusion stacked up to make me decide not to go (too much money, etc. etc.). The rest of my memories on this though, are fun!

1 I believe I helped, but a snafu in 2015 sent my email records from the previous decade down a dark hole so I can’t find them.

2 The historic Taliesin estate—what Wright owned—is 600 acres. The estate today, however, is 800 acres, because the site owners, the Frank Lloyd Wright Foundation, purchased roughly 200 acres to the west of the historic estate in the late 1990s. Wright never owned those 200 acres.