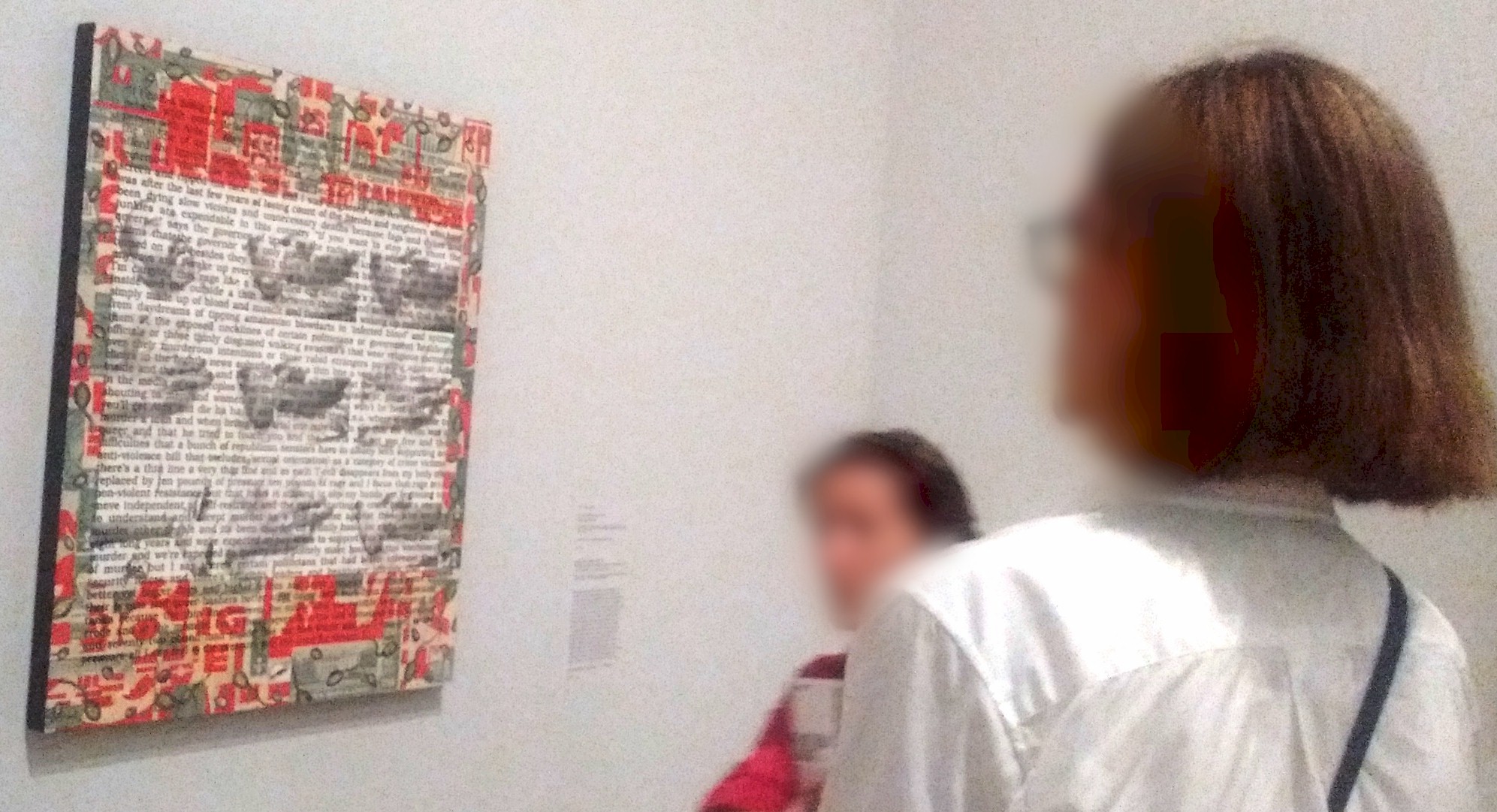 Looking at Untitled (Hujar Dead), 1987-88. “Hujar” was Wojnarowicz’s mentor & dear friend. The piece has writing silk screened over photographs of Peter Hujar (who had just died from an AIDS-related illness).
The writing, in part, says, “I’m a thirty seven foot tall one thousand one hundred and seventy-two pound man inside this six foot frame      and all I can feel is the pressure      all I can feel is the pressure and the need for release.”

My husband and I were driving in the car and “It’s Been a Minute” with Sam Sanders came on. Sanders interviewed Sarah Schulman, co-director of the ACT UP Oral History Project and the author of Let the Record Show: A Political History of ACT UP New York, 1987-1993 (“ACT UP” comes from AIDS Coalition to Unleash Power). It’s a great interview that I encourage you to listen to.
https://www.npr.org/podcasts/510317/its-been-a-minute-with-sam-sanders

Listening on the radio, and the fact that it’s Pride Month, pulled me to write this post. It’s about another long-term interest of mine: the artist David Wojnarowicz [VOY-nə-ROH-vitch].

Wojnarowicz (1954-1992) was an American multi-media artist who died of an AIDS-related illness and was the subject of my Master’s Thesis in Art History in 1994.1

If you’ve not heard of him, you know at least one of his pieces: it’s Untitled (Falling Buffalos).2 I’ve noticed it a lot online and it was also the cover of the CD single, “One” by U2. The piece also graced the cover of his book of essays, Close to the Knives: A Memoir of Disintegration, which I took a photo of, and that’s below: 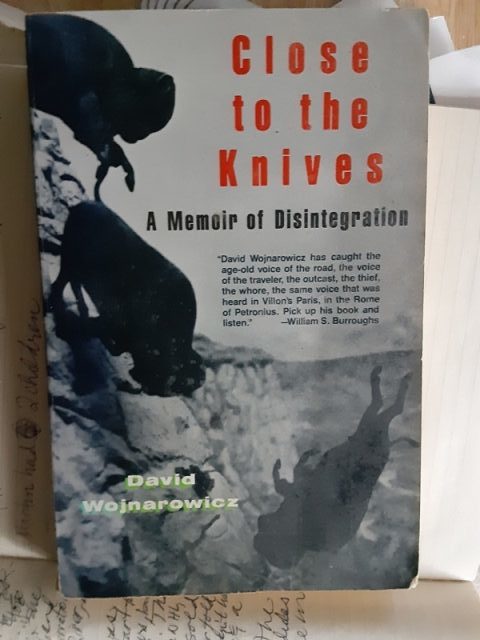 Cover of the book, Close to the Knives: A Memoir of Disintegration, by David Wojnarowicz. The book is sitting on a small table with my notes in the background (as apparent decoration?).

This post will not be a biography on the artist. That was expertly done by Cynthia Carr in her book, Fire in the Belly: The Life and Times of David Wojnarowicz.

Talking about why I can’t really talk about him

I’m not certain I can properly write about him at all. This sense of inadequacy also explains why I didn’t go to NYC 1990-92 to find him. I kept imagining walking up to him (myself a white, suburban girl with combat boots as my ONLY hard-ass protective badge) and saying. . . what? “Um. . .  I like your work”?

This was a man who, according to Close to the Knives, lived mostly on the street when he was a teenager (you’ll have to read Carr’s biography to understand more), and (among other things) created art in a falling-apart pier on the Hudson River by spray painting on the crumbling walls and, one time, throwing grass seed on the rotting floors (you can see the grass in the 6th photograph from the Hyperallergic page linked to in this sentence).

My encounter with his work came at a good time:

His time at the forefront of art began in the 1980s while he participated in the art scene in the East Village of New York City. The energy and dynamism of his work drew me when I first encountered him in an article in The Village Voice3 in 1990. He didn’t seem to apologize for being gay, or for being angry at the rampant homophobia surrounding the AIDS crisis.

And while some see him as “an angry artist”, I never did. It seemed to me that his anger was completely justified. If you watch him on YouTube you can see him explain reasons to be angry.

Now, here are links to a small bit of his art:

While I was first drawn to his painting, my thesis concentrated on his photography, which he began exploring in the late 1970s in a series called “Arthur Rimbaud in New York”.

He made a mask from a photograph of artist Rimbaud’s face and took photographs of the model with the mask all over New York City in a variety of different situations. I find it interesting that he explored a similar subject as Cindy Sherman, with her Film Still series of the same time period. It was the wearing of a mask. Plus, using Rimbaud automatically throws in “The Flaneur“: the withdrawn man watching society around him.

Another series of black & white photography (and photo collage) comes about a decade later, and I think it should be mentioned. It’s “The Sex Series”. It’s fascinating, intricate, includes his writing, and can be interpreted a variety of ways. The piece I’ve linked to is what I started my thesis talking about (I won’t put in my text; it’s 10 pages long). But just these two things (Arthur Rimbaud & “Sex Series”) give you a hint of how wide ranging his work could be.

Here’s what I took at a retrospective:

I took this in 2018 retrospective at the Whitney Museum of Art in NYC (“History Keeps Me Awake At Night“): 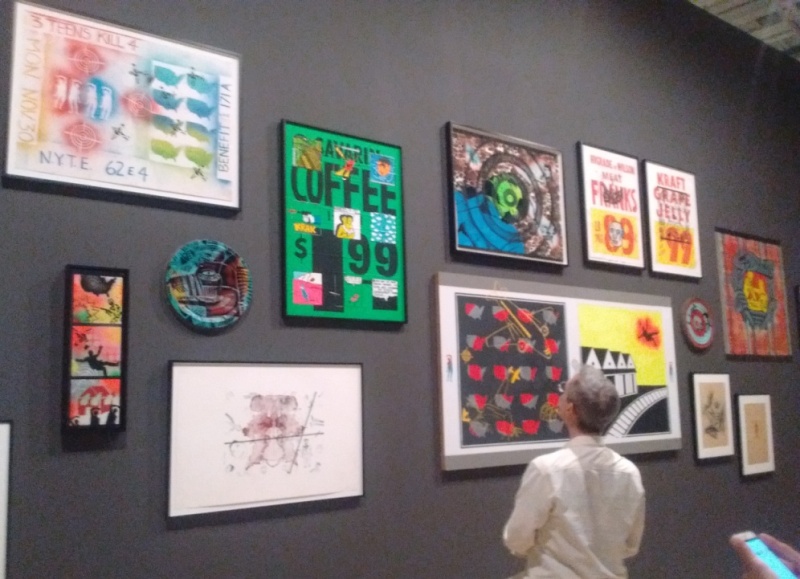 Wojnarowicz was put into the category of “Graffiti artists” in the early 1980s (like artist Keith Haring) because he painted on the tops of trashcans and used stencils, among doing other things. The photograph above has one of his stencils, “Falling Man” in a piece on the left.

My Major Professor (advisor) was generous in encouraging me to pursue the artist for my thesis, even though Wojnarowicz had passed away only two years before. I didn’t majorly screw up on it, and am mostly proud of my writing. And still proud of my thesis title: “The Inscrutable Imagination and the Politics of Visibility in the Art of David Wojnarowicz”. It’s earnest, complex and, like the thesis text, has the hard, serious chunkiness of homemade artisan bread.

A list of books and articles about the artist:

Since I really cannot write about the man the way he should be written about (I’m the Taliesin Historian, not the Wojnarowicz historian), I’ll add some of the books/articles on him/by him/from exhibits on his work:

Talk about “full circle”: it’s the reproduction of the piece (owned by the Chazen) that I first saw in the now-Chazen Museum of Art at UW-Madison less than six months after I started Grad school. A person’s bandaged hands (in B&W silver nitrate) are in the background, while the text is in the foreground.

Instead of the energetic, intense man I first saw, the words on the piece (a lot of his art includes writing) showed a 36-37-year-old-man discussing the reality of his oncoming death:

“I can’t abstract my own dying any longer. I am a stranger to others and to myself and I refuse to pretend that I am familiar or that I have history attached to my heels. . . .” Ending with, “I am disappearing. I am disappearing but not fast enough.” The pain and exhaustion struck me and I stood looking at it for an unknown amount of time. I ended my thesis talking about this work. It wasn’t until I read Carr’s biography that I found out this piece was the last he ever produced.

The “Pre-invented Existence” is what Wojnarowicz felt we all lived in.

First published June 20, 2021.
I took this photograph at the Whitney Museum of Art in NYC during its retrospective in 2018, “History Keeps Me Awake at Night”.
As I often do, when I take photos, I’m doing it mostly for documentary proof that I was there. And I wanted people in the photo so I could remember the actual size of the piece. You can see Untitled (Hujar Dead) at the Whitney: https://whitney.org/collection/works/48140

1 My thesis defense in November 1994 came just under 4 years after my first encounter with Wojnarowicz. December 1, 1994 was “The Day Without Art” on World AIDS Day. I and other Grad students created a series of presentations on it, the first time that had been done at the university museum. Organizing that with other Grad students is something I’m still proud of.

2 I love Wojnarowicz’s work, but the number of artworks that he left untitled is incredibly frustrating.

3 Cynthia Carr mentioned that she wrote that piece in her introduction to Fire in the Belly, her biography on Wojnarowicz. Not to be melodramatic, but I can’t remember how long I stopped breathing when I read that. The piece had an undeniable effect on my life.