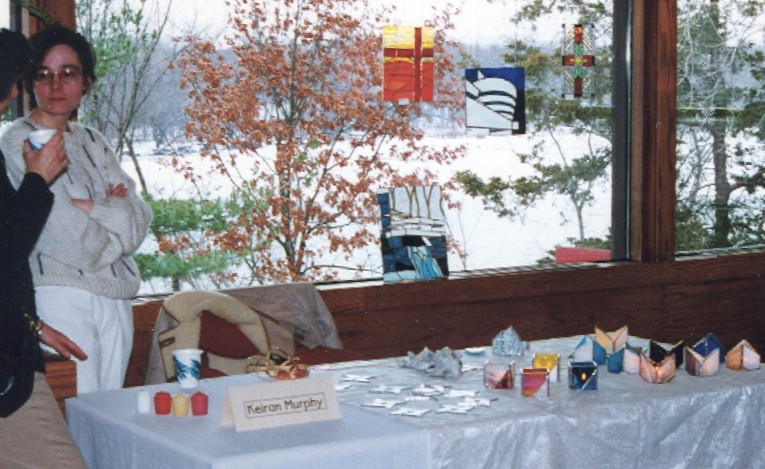 Selling my wares to the public

Taken in 1997. Me talking to someone at the art fair that was held in the Frank Lloyd Wright Visitor Center. I’m standing to the left of all of the stained-glass pieces that I had made.

No:  “selling my wares” in this post does not mean I’ll write about giving Taliesin tours.

I’m talking about my time making (and selling) stained-glass items. My work was not completely

although, yes it sort of was,

But why I’m writing this today:

For years, December was the month in which I sold my stained-glass items at an arts and crafts event in the Frank Lloyd Wright Visitor Center.

As I wrote above, my stained glass has a little (ok, maybe a bit) to do with Frank Lloyd Wright and Taliesin.

I started making stained glass the first full year I worked in the Taliesin tour program,

my first summer of tours was 1994, then I went back to school the fall semester to finish my degree.

and geometric designs were among the first things I made.

Although, I also made objects such as ornaments and candle holders, like you see at the top of this page (they were easier to make). As you also see in the photo up there, I designed, and sold, pieces with a Wright connection. That photo above shows my rendition of the Guggenheim Museum and Fallingwater. 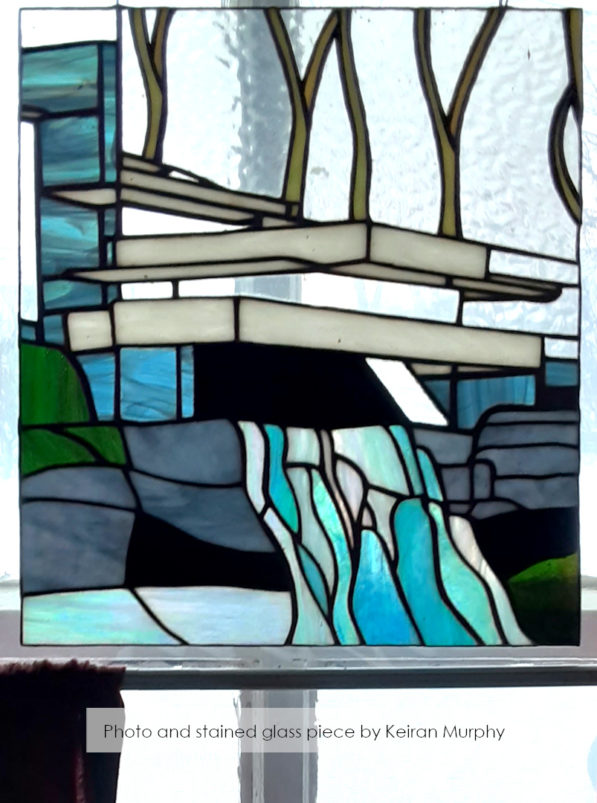 This is in my kitchen. I sold another one of these after I corrected a mistake in this version.

Additionally, I created designs from compositions that I saw at Taliesin and Hillside.

How much I charged for these:

I was told to charge $3 for every piece of glass I used in a piece that I made. That accounts for materials and time. So, an ornament with 4 pieces would be $12. But that Fallingwater piece in the photo? Over $300. It’s cool, but would someone spend that much money on something that small?

I put a list of designs I put on paper for later stained-glass windows that are related just to Taliesin and the Taliesin estate. I sold most of them, and traded one:

You can see in the numbers I wrote on the paper before cutting it (and, then, the glass). This is part of the procedure with the copper-foil method of making stained-glass designs.

Obviously, that’s a picture of the real waterfall at Taliesin. I executed a stained-glass piece of the waterfall, but I can’t find a photo of it or its drawing. I took this photo in 2004.

Get back to the arts show—how did it start?

One afternoon in October, 1995 after all the tours had gone out, several staff members started talking.

While talking, they had an idea.

They all knew that, once December came along, nothing would be going on in the building except for the gift shop staff getting items out to customers. The  gift store was still open on the weekends, however, for people buying gifts.

The folks that day in the visitor center thought: why not take the café area,

which was not in use because the restaurant was closed

re-arrange the tables there, and set up some homemade items to sell?

After all, by December, while the tour season was completely done, the gift store was still open on the weekends. Therefore the main floor would be heated to catch anyone interested in holiday shopping.1

The thought was: do this the first two weekends of that month.

After all, we had homegrown talent:

I had recently started making stained glass; a shuttle bus driver made her own paper and paper boxes;2 a guide/gift store attendant crocheted scarves; and her husband made decorative wooden carvings. Feeling optimistic, we asked a supervisor if we could try selling on the main floor in December. This wouldn’t cost them any money and we’d clean up after ourselves.

They allowed the idea.

So, we tried it that first December.

Ah, yes! This was like the pluckiness of the Taliesin Fellowship itself. Once more, it was like Andy Hardy saying,

Come on let’s put on a show!

We did this with no expectations. We moved the tables and chairs into place that Saturday morning in December, set up our stuff and hung out with our items. People who came in to buy things at the Taliesin gift shop took a look at our displays and bought some things. Overall, it was a success, even though we didn’t publicize it.

That started a tradition

at the Visitor Center of an arts and crafts weekend (although now just one weekend in December). I think we did it on 10 Decembers.

I found a write-up about one of them on the Taliesin Preservation website at the Wayback Machine.3 That write-up (for the “Annual Holiday Art Festival”) has a lot of detail. A lot. Which makes me wonder if I wrote the piece (even though someone else oversaw the website at that time).

fit in very well with Spring Green‘s newly-created “Country Christmas” celebrations in the village across the Wisconsin River.

The first full weekend of December has a light parade, followed the next night by fireworks.4

the small success in the Visitor Center caught the attention of others in the organization. So a few notes were put out, and the next year a few more people came and sold items. In a few years, there was a fabulous mixture of sales items, locally-made sausage, cheese, and wine, as well as entertainment.5

I think perhaps that the no-frills, “let’s just move some tables around”, was overwhelmed by its modest success. Eventually, there had to be organizers, and advertising, and a lot more work than it was worth to many people.

by that year, I lived in a house where I could only make stained-glass pieces in the garage. But it wasn’t climate controlled. Now, I didn’t need comfy temperatures, but

sometimes it got so cold that I warmed up my hands by resting them on the electric, metal, radiator that I’d turned on.

While in the summer,

I had to take a break when I cut glass on the days when the heat made me sweat too much. I didn’t want to lacerate my fingers (or cut a vein).6

Is there a lesson in this?

But that lesson goes back to

what I started with:

After all, a classmate in Grad School once observed that:

“Those who can’t do art, teach Art History”

Despite at least two classmates who were artists; one of whom teaches and continues making art.

And due to my experience crafting stained-glass designs, I think people who learn art history should take an art class. You know, actually make something. I remember when I was in grad school for AH at the University, I met some students getting their BFAs who had to take AH, but not the other way around.

when I had to work with materials,

and find out what does and doesn’t work in a composition, and USE some of that geometry I learned as a high school sophomore,

I realized it takes quite a bit of work and knowledge to make even a halfway-decent piece of art.

First published December 9, 2022
I was given the photograph at the top of this page, but cannot remember who took it.

1 Later on, they kept the visitor center open only when tours were going on. So: nothing past November. But in the early years, they were still trying to “feel out” the ends of the tour seasons.

2 One of her boxes sits, right now, to my lower right.

3 Remember I wrote about the Wayback Machine in September of last year.

4 If you want to be enveloped in “smalltowniness”, take a look at the video for the song, “My Hometown“, by Camela Widad. She wrote the song about Spring Green, and filmed it in, and around, here. It’s a great little song. It’s got a summer vibe, so you might want to wait until you’re sick of winter.

Part of the video for “My Hometown” was shot at the Post House Garden, which is where the Post House (once the oldest restaurant in Wisconsin) used to stand.

The Post House burned down in a fire in 2004. The owners decided not to rebuild.

5 And, it is the reason why I know, and love, Merry Christmas from the Family, by Robert Earl Keen. That’s thanks to the photographer-writer-musician who used to play it at the Visitor Center on Saturdays at the event.

6 “Don’t get mad at the glass” was what I learned, early and painfully, to tell myself. That was after I, yes: got mad at the glass and cut my finger while aggressively moving around. It was one of my first “learning by doing” lessons in the glass craft. Fortunately, there was no scar, but I did bleed.