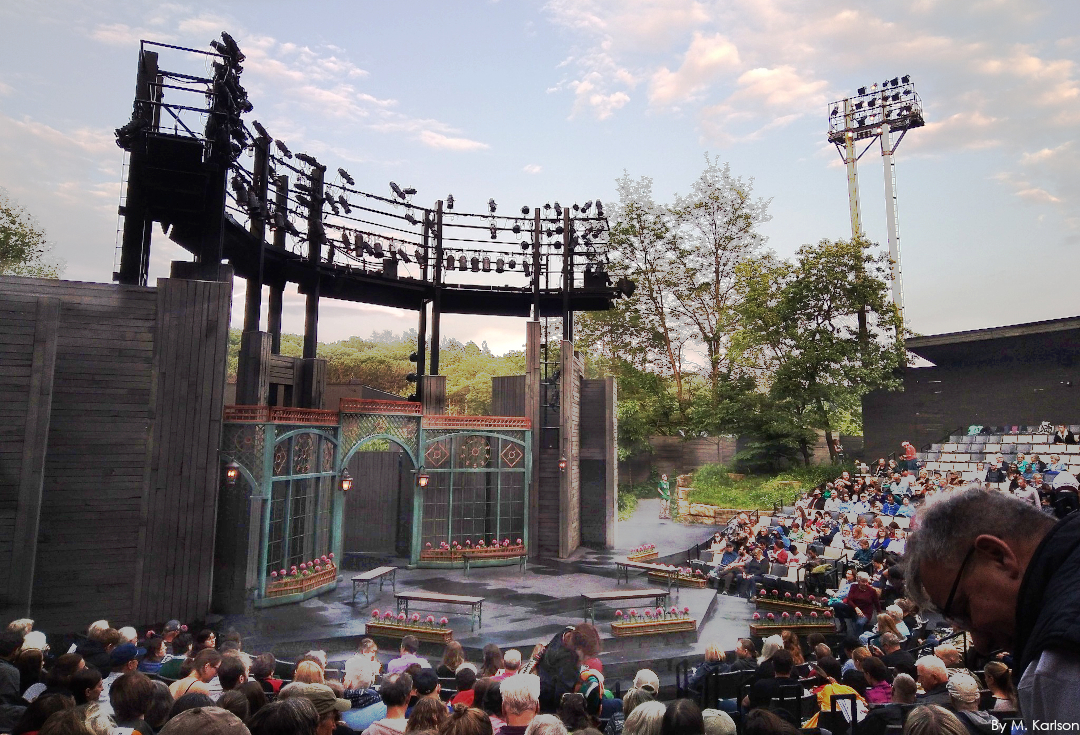 Photograph taken in the American Players Theatre on June 11, 2022, before the start of the show, The Rivals. Members of APT belong to the Actors Equity Association, so photographs are prohibited during performances.

I’m not writing this week about Frank Lloyd Wright, the Taliesin estate, or other non-Wright things I’ve delved into. I’m going to write about something close to the estate that contributes to the area around Wright’s Wisconsin home. This is the American Players Theatre.

Founded in the 1970s, “APT” is a repertory theater that operates during the warmer months. It puts on 8-9 plays each year, many of them simultaneously. 5 of these shows are “up the hill”: an outdoor, 1,089-seat amphitheater that you get to by literally walking up a hill (there are snacks once you get there, I promise).1 APT has a smaller theater near the base of the hill called the “Touchstone Theatre“. It seats 201, opened in 2009 and has 4 plays running during the season.

APT is made up of a core-acting company, as well as cast members coming from around the country each season. Its regular season starts in mid-June, and runs until the last night of the first weekend in October.

Perhaps Wright/Taliesin changed the town, or the town was changed due to so many other Wisconsinsites. However, APT is a notable factor in the town’s

In addition to many core acting members and the Stage, Production, and Operations Managers, in residence in/around town, every summer Spring Green’s population increases with more actors, directors, and everyone else involved in

Putting on a show!

Also, a yearly audience of around 100,000 people come to the shows, see the town, etc etc.

Now, I could keep going on with every stage person I could possibly think of that was/is involved. But I stopped because I realized I wasn’t writing a piece for Morning Edition. I apologize to those I left out.

For a few years in the late 1990s I had a part-time job at APT (which, at that time, was only on the stage “up the hill”).2 In no way did I do anything important.

Here’s what I did the majority of time:

Really — why did I do this?

I thought it would be cool to see the APT shows, despite not having a background in theater

(except for being surrounded by friends in college who were actors, and taking a couple of acting classes)

And, as I worked completely in tours (as a guide, a House steward, and in the bookstore), it was refreshing to be completely anonymous.

The freedom to observe different plays through an entire season:

Gave me the chance to watch my favorite scenes over and over throughout the season. And see the actors play with their line delivery from night to night.

Or just slog along while the actors dealt with the wind, rain, heat, and cold.

Well, yes, and everyone who was in the stands had to deal with this, too. But the actors and other staff had to be there.

there was a Saturday during a summer heat wave the season that one actor played both Richard III and Cyrano de Bergerac. This one day, Lee Ernst acted in Richard III—a play lasting several hours with the battle scene at the end—in the mid-afternoon show. And this was followed by him as “Cyrano” in the 8 p.m. show. The play in which Cyrano fights with a sword in his first scene.

These engendered moments of fascination. I knew a little of what it was like to be outside giving tours through spaces lacking climate control on hot and humid days. However, I wasn’t holding a sword and wearing a costume that covered me from my neck to my ankles.

APT eventually added a sunshade over part of the stage (as in this 2011 photo through Foursquare). I was told that at these times, the stage itself could be over 100F (38C). You could only wonder at the physical brutality that the actors went through.

My one full season

To get back to my easy work: I worked at the end of APT seasons (like the season with Cyrano and Richard III), and one whole season (1998). The plays at that time were:

It rained a lot that year. A LOT.

Oh, and June of that year saw an oak tree at Taliesin’s Tea Circle oak tree crash onto Wright’s front office, next to the Taliesin studio. Which was followed 10 days later by a landslide at Taliesin.

I think all the staff got to know the lines in the plays that referenced rain.

btw: Since APT’s Hill Theatre is exterior, they have lots of ways to deal with rain and do everything they can to make sure the show goes off. In fact, APT’s weather policy has its own webpage.

At the end of that season, there was a private party of APT staff, with awards that staff members gave each other.

A note about me in the Taliesin tour program:

The APT awards inspired me to start awards for our end-of-the-season parties. I put the awards together for about 5 seasons.

Some awards: “most chronometrically challenged tour guide”, “Answers the question, ‘Is this the House on the Rock?‘ with patience and aplomb,” etc. etc.

Another note on weather in another season:

One time while working on the House crew at the end of September, I watched snow flurries during “Much Ado About Nothing“. Not what’s envisioned: 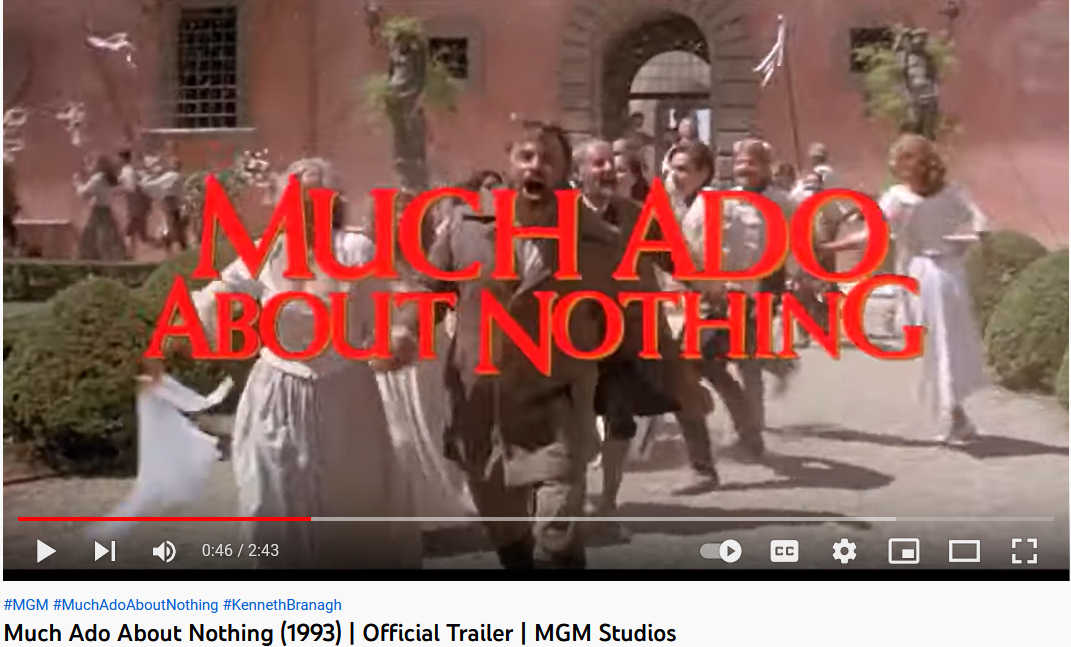 That’s why the costumes allow actors to wear either heat or cold packs.

Enough days and nights are magical that they make up for everything. There are nights at APT that are warm with the call of Whipporwills and the audience sees distant clouds discharging silent thunderbolts. Nights in which the lights come up at the end of the show and you look up and there are stars over your heads.

And, during one performance (as an audience member in 2017), a bat flew near the stage during the farce, “A Flea in Her Ear“. The actress playing the character of Olympe (a proprietor of the slightly run-down hotel, Coq d’Or), following the overhead visit by the flying little rodent, casually said, “don’t mind the bats” to her patrons while she walked out.

APT is the way I got introduced to my friend, Terry Teachout. He came out to Spring Green to review shows from APT and saw Taliesin, for the first time and met me. I can’t go too much into it since he died unexpectedly this past January. He just loved APT, and thinking about him gets me teary-eyed.

1 There are buses that drive people up the hill starting 45 minutes before showtime. We’re only hardy in Wisconsin; not sadistic, or murderous.

2 and given my post-Covid situation, $300/month sounds nice, too.

3 No: he didn’t kill his wife.
I thought we went over this.
Plus, she wasn’t his wife; she was his mistress/partner.

3 I’ve heard this at least once from staff over the years: sometimes APT receives complaints from people who have seen a show, and would like the “volume of the whippoorwill” to “be turned down.”

Granted, I have been in all-inclusive amusement parks where you don’t know what sounds or events are planned/piped in. However, in this case I can tell you: the whippoorwills at APT are real.