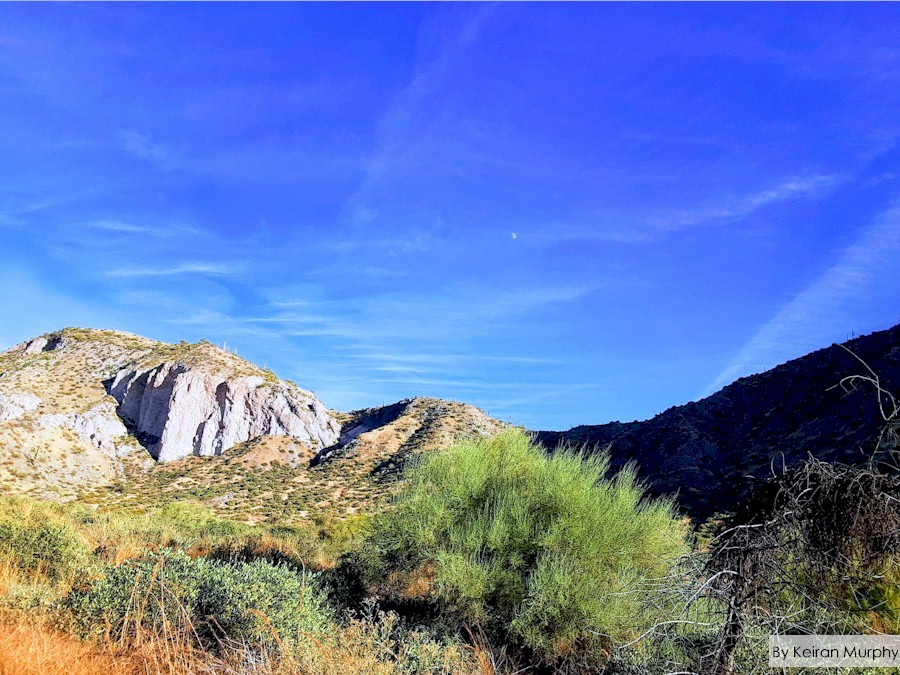 A desert landscape outside of Scottsdale, Arizona.
Taken December 2021.

Beating the wave of the Omicron variant of Covid-19, we went to Arizona the second week of December. We went there for the Open House at the Organic Architecture + Design Archives. The OA+D Archives was founded by people who have wanted to secure the future of information on those who practice “Organic Architecture“. So, they have assembled objects—drawings, photographs, models, etc.—particularly by those architects who worked with, or apprenticed under, Frank Lloyd Wright.

The OA+D recently acquired the Taliesin Architects collection. “TA” were members of the Taliesin Fellowship and Frank Lloyd Wright’s former apprentices. After his death in 1959, they completed his ongoing projects. This naturally led to people coming to these former Wright apprentices to design their own homes and buildings. These former apprentices incorporated the firm in 1960 and ran it until 2003. The collection has many things from the firm; basically thousands of objects.

Tour guides had to learn about the Traveler’s Guide since it was the easiest handout when helping visitors figure out the area. I think I learned about it the first weekend I ever gave tours. I’ve seen guides flip automatically to the page with the Architectural Driving Tour if someone came looking for a tour after the last one had left for the day.

So I made an appointment

Not to go on a tour (I’ve taken Taliesin West tours about 10 times). I went to transcribe some of “the correspondence”. This is the correspondence from Frank Lloyd Wright’s archives. It’s over 200,000 pieces (so a postcard is one piece, and a 10-page letter is another piece). It’s to/from Wright, his family, his business associates, et al.

Over 30 years ago, all of the correspondence was photographed and put on Microfiche. Then it was indexed in a five-volume set of books. You can look for the names of people who wrote to Wright, who he wrote to, when they wrote, what building they were writing about, etc. Every piece has an index number. You want to check out that piece of writing, you write down the identification number and look for it on the piece of Microfiche.

I think even if you were the President of all Historians, you wouldn’t get a lot of chances to physically pick up the “real stuff”.

The Avery Fine Arts & Architectural Library, along with many things, has a copy of the Mircofiche. As does Taliesin West.

As well as the Getty Research Center in Los Angeles.

I first looked at the correspondence (and other things in Wright’s archive) almost 15 years ago (I wrote about it in my post about photographer, Raymond Trowbridge). And yet, looking at letters and telegrams from all these people associated with Wright / Taliesin—to discover his activities on his whole estate—is like seeing the streamers shooting out from the sun’s corona. You can’t closely see what’s going on at the sun itself; you see its outer edge and its effects.

relatively few of the letters and telegrams deal with the actual buildings on the Taliesin estate. There just aren’t that many letters of him acquiring stone or writing down a formula for a plaster color. When he wanted something anywhere at Taliesin, he could just tell people what he wanted because he was often there.

Yet, I have dug around in ways over the years to find answers.

That’s how I found the letter where Herb Fritz offered Wright some stone “In Return for the Use of the Tractor“.

While I didn’t know what I’d find this time around, I looked for stuff related to Wright’s “Midway Barn” on the Taliesin estate.

Happily, I found the only piece of correspondence that specifically related to Midway Barn! In May 1938, the Gillen Woodwork Corp shipped material for roofing, they said, on “your Midway Barn.” That 1938 date explained why the director of the Archives, the late Bruce Brooks Pfeiffer, had said for years that the building was begun in 1938. But in the Frank Lloyd Wright: Complete Works, vol. 2, 1917-42 (2009), Pfeiffer wrote that Midway’s date is c. 1920.

I always hoped it was because Pfeiffer had seen my writing somewhere about Midway, in which I gave evidence that the building existed by 1920. And, thus, was persuaded by my genius. (Or perhaps something else. I don’t know, but I prefer “genius”.)

Because “Bruce” took a look at a drawing they have in the Archives. It’s drawing Number 3420.005,  first executed in 1920 by draftsman, Rudolph Schindler. Schindler left this at Taliesin, and, like many drawings of the estate, Wright continuously drew on it. Still, when you look at the copy at the link from ARTSTOR, you see a building right in the middle of the drawing, under the scribbles. It looks suspiciously like Midway.

Now, I don’t trust Wright’s drawings of Taliesin, because he often drew what he wanted to exist at Taliesin along with what was actually there.

I wrote about that (of course I did) in my post, “Exhibiting Patience“.

But Schindler’s original drawing appears to show what stood there in reality.

Here’s a crop from the drawing, below: 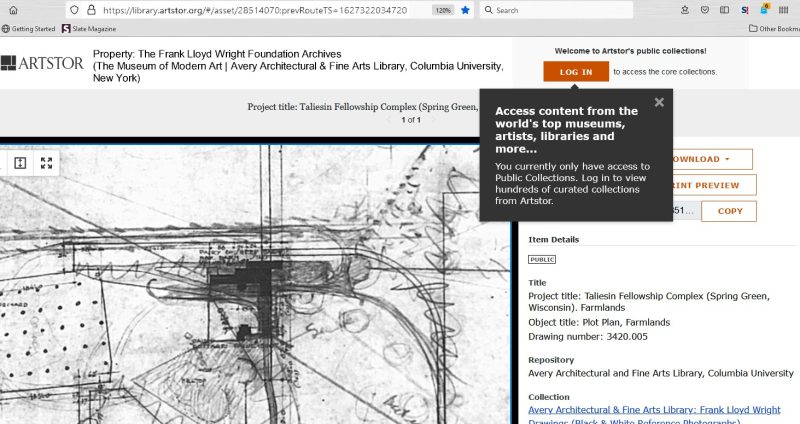 Schindler’s drawing is the darkest part in the middle. Now this makes me wonder who originally wanted that structure built.

Wright, maybe, but his brother-in-law, Andrew Porter, had owned that piece of land until about a month before Shindler made the drawing.1 And as I said, Schindler seemed to draw what actually existed. Not all of those scribbles that Wright added later.

Well, as I’ve said for years: if Wright had made it easy, I wouldn’t have a career.