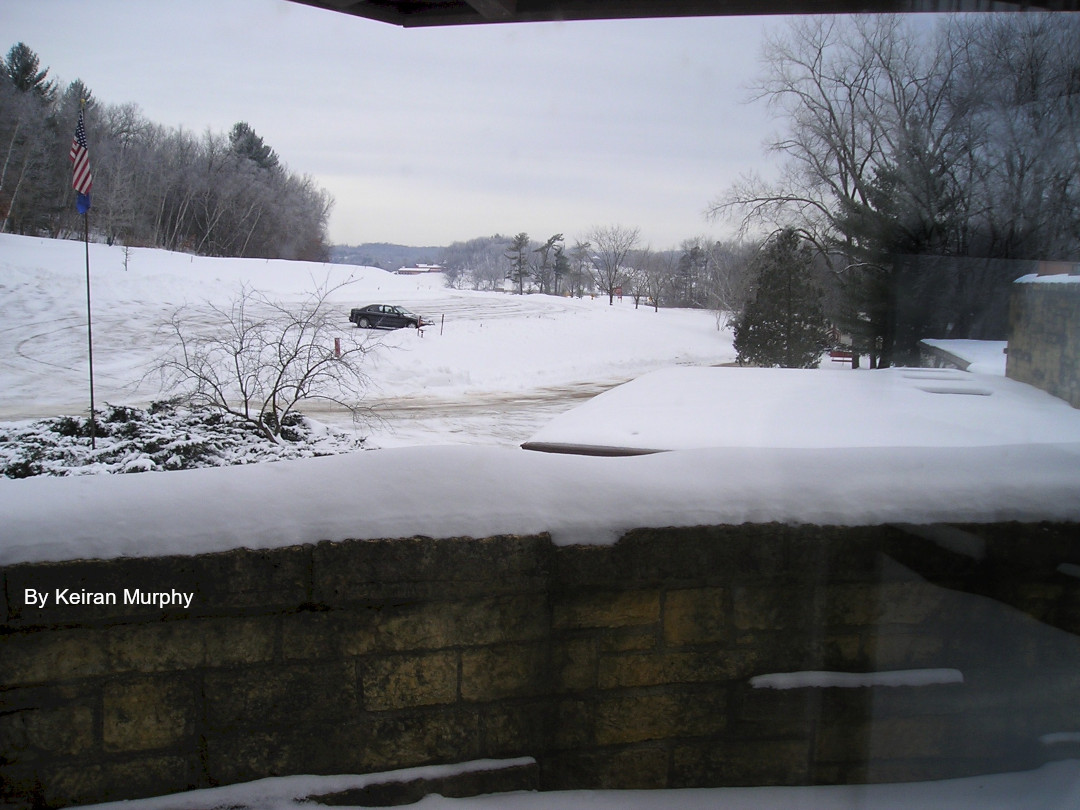 I took this photograph looking out of a window of my office at the Frank Lloyd Wright Visitor Center. You can see my lone car in the parking lot. Sometimes when I came into work, the ice was a little “sketchy” to the employee-parking-lot up one level. In that case, I just stayed below rather than try to get up there.

I live in a small town.

It has one stoplight and a population of around 1,600 to its outer edges.1 Sometimes the winter has the same grind, when you don’t see much of anything or anyone.

But this meant a great commute when I worked at Taliesin

I could drive to work in 5 minutes. And, when temperatures are 10-20F (-12 to -6 C), curious visitors with questions didn’t come to the door. This quiet time meant that I could investigate things without interruption.

For example, during this quiet time, I acquired copies of the 13 images that Raymond Trowbridge took at Taliesin in 1930.

And at that time, I had the chance to take photographs of the ongoing work by the Preservation Crew in Taliesin’s Guest Wing. 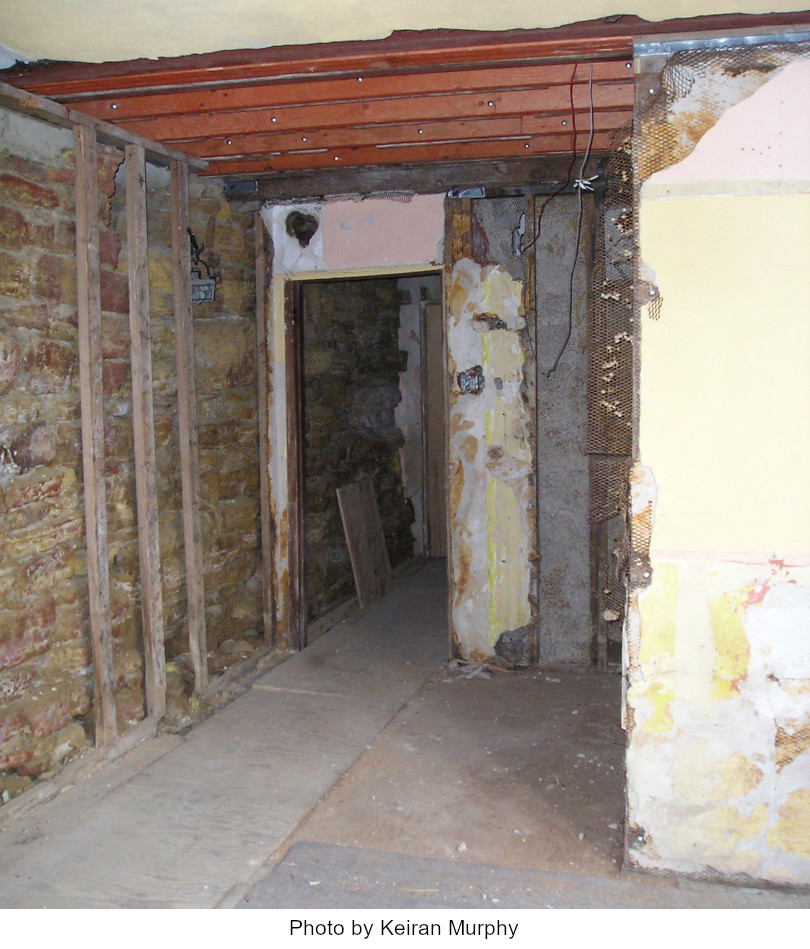 The stone on the left-hand side of the photo was a stone wall that’s been there since 1911. It originally stood outside. The wall hasn’t moved: the building just got longer.
You can see that stone wall in my first post, “What was on the menu the day they were murdered?”

This photo shows the Blue Room. I identified the Blue Room in that photo I investigated that one time before Christmas.2 Here’s  the post-restoration photo of the same room: 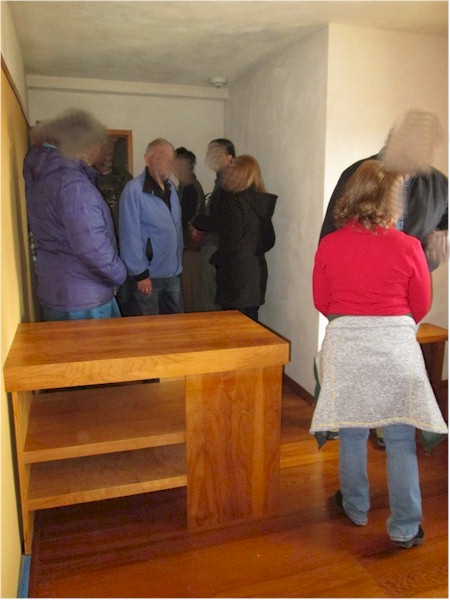 During the quiet time, I also

wrote a chronology of Taliesin’s exterior courtyards and terraces. One part of that study was an examination of Taliesin’s Tea Circle. So my work gave the Frank Lloyd Wright Foundation its basic history while restoring the area.

I wrote a lot about the Tea Circle in “What’s the oldest part of Taliesin? Part I“.

One quiet time inspired staff to recreate the radio tradition of

In other words, one person read a chapter from a book each day at lunch time.

and the chosen book was TC Boyle‘s The Women.

I mentioned Boyle’s book when I wrote about Taliesin II and Wright’s relationship with his second wife, Miriam Noel. The book even has its own Youtube video. It’s surprisingly entertaining.

we didn’t take turns reading chapters. Only one person on staff read: Bob (who is a Jeopardy champion!4) read it to us while we sat around a table in the Hexagonal (“Hex”) Room.

It was important we read this book because of the excitement in 2007 after the release of the book, Loving Frank.

the staff’s sojourns up to the Hex room gave them the chance to get warm after being downstairs in the basement. Srsly: the only time the walkout basement isn’t cold is the months of July-August. I’d come downstairs to the office there sometimes in the winter and see the staff typing with fingerless gloves. Sometimes when I came off tours in summer months, I’d walk down the stairs and lie down on the floor to cool down.

Bob worked on the register for tickets during the tour season. In addition, he scheduled tours. He had an amazing ability to schedule the staff and add tours. On the busiest days, up to 11 tours went into the House: 1 Estate Tour, 3 Highlights Tours, and 7 2-Hour House Tours.5

He also had the ability to tell which visitors approached the tickets area thinking they were actually at the House on the Rock.

every day, Bob would read a chapter. Afterward—in addition to voicing our annoyance with Miriam Noel—folks around the table would ask me what was truth and what was fiction in the novel.

I even wrote a “Hey Keiran” about the novel for guides and staff the next season.

Easy answers on “What’s true or not” in The Women:

Following Bob’s completion of the novel,

I did what I often did that winter: looked for images of Taliesin and the Taliesin estate, continued studying Taliesin’s history, and checked out the work the Preservation Crew was doing.

1 I have a memory of watching the television show, Entertainment Tonight, over 5 months after the release of the 1997 movie, Titanic. The ET hosts started the show talking incredulously about a small town in upstate New York that had only, just then, gotten the movie at the town’s theater. I remember thinking that the Gard Theater in Spring Green had also not gotten that blockbuster.

And I remember one time in which I was at a break at a summer music show with an old boyfriend. Someone else walked outside with us and he asked them how they liked our little town.

“It’s nice,” she said, looking at the sky. “But there’s that cloud that won’t go away.”

He and I both looked up and he answered, “That’s the Milky Way.”

Definitely makes up for having no food service except for Culver’s, Subway, or the convenience store after 8 or 9 p.m.

2 Since my work identified what the room looked like without the load-bearing closet, the Preservation Crew removed it. They switched the support of the load to the micro-laminated beams you see in the ceiling.

5 Bob’s ability to schedule all those tours meant that, when we were super busy and he’d schedule up to 7 that day, he would add a 2-hour tour of the House at 1:30. However, the reality of the timing (with Shuttle buses, etc.) meant that the guides had to gather folks on the 1:30 House tours at 1:20. And folks on the 1:30 House tour would walk out of the building at 1:25. This resulted in a real-life example of my joke book title I wrote in this post: “What time does the 1:30 tour leave?”