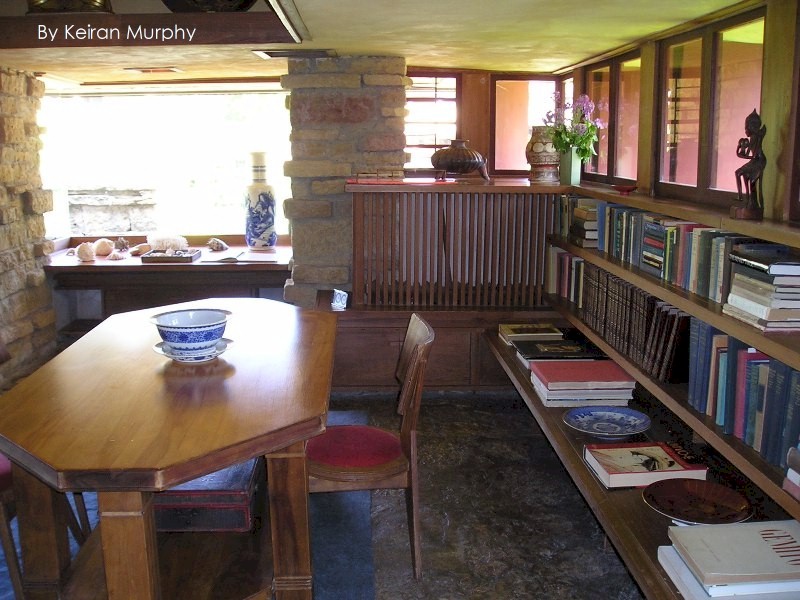 Looking (plan) west in Taliesin’s Garden Room. Everything you see in the room (except for the plant and thermometer) was designed or owned by Frank Lloyd Wright.

I thought about this yesterday when seeing a link to a video through Taliesin Preservation’s Facebook page. Their link went to a video put up by the Frank Lloyd Wright Foundation (the Taliesin Estate owner) a couple of years ago. The video was about Frank Lloyd Wright and recycling. In the piece, two staff members from the Foundation sit in Taliesin’s living room talking about Wright’s reuse of materials at his home.

My post today will be about another time I noticed that Wright reused materials at Taliesin.

Now, one of the things staff from the Frank Lloyd Wright Foundation points out is a music chair of Wright’s design in Taliesin’s living room. The sign was plywood, and Wright used this and other signs in his buildings to go along with his models.

And, if you take a tour at Taliesin (tours start on the weekends in April), you see there’s this chair with a cushion tipped up, showing that the seat of the music chair is made from scrap from an old sign. I put a photograph below of a sign, that I took from one of my old magazines.

At the time the magazine was published (Architectural Forum in 1938), people took tours given by Wright’s architectural apprentices. The photograph below shows one of the rooms people went through, with signs and some models.

By the way: you still go through this room on Taliesin tours. It’s in the Hillside building and you see it on Taliesin’s Estate tour and the Highlights tour.

The font on the sign in the background above, that says “A New Freedom”, is the same font as that on the chair: 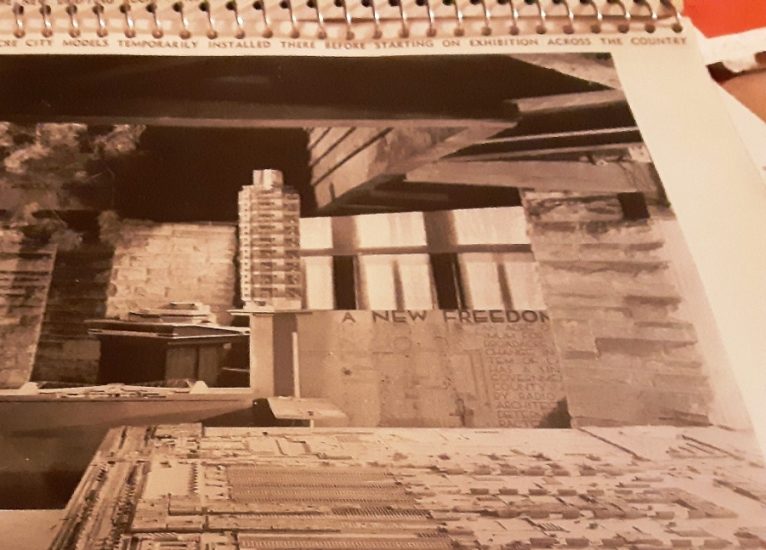 Getting back to what I thought of:

That talk (between Ryan and Jeff) from the Foundation reminded me about something else that was reused inside Taliesin. I found it while cleaning the furniture before tours.

See, back in the olden days, before the start of every tour season, staff from Taliesin tours would clean and arrange everything at Hillside and Taliesin. In addition to the buildings not being used on tours for 6 months, the tour space of both buildings (except for Wright’s drafting studio at Taliesin) were not heated.

I wrote about that in the post, “Did Wright Ever Live in Wisconsin in the winter?“

no: these tour spaces weren’t heated because the mechanical systems had broken down after decades of use.

As a result of no building heat,

Since the Taliesin tour space is now heated, tours go through the Taliesin residence on the weekends in November and April before completely shutting down (Wisconsin winters, you know).

“Closing” took 3 days or so. Opening the buildings took longer. That’s because everything (furniture, floors, doors, windows, and all horizontal surfaces) had to be washed by hand.

Oh yes: I killed a lot of spiders during my years of Opening the House. I apologized to them while squishing them and hope I don’t have to pay for that in my next life.

This work was done in spaces that, in April, were in the low 50sF (about 10-16C). Sounds pleasant, but not when the air, windows, and walls have soaked up the winter cold, and you’re sitting on stone floors that are colder than 50F.

Sometimes on nice days in mid-April, we’d open up the windows and doors to bring in warmer air.

One April day, I was cleaning in a room known as the Garden Room. The Garden Room is in the photograph at the top of this post.

I’ve taken a crop of the drawing and wrote where in the room I was cleaning: 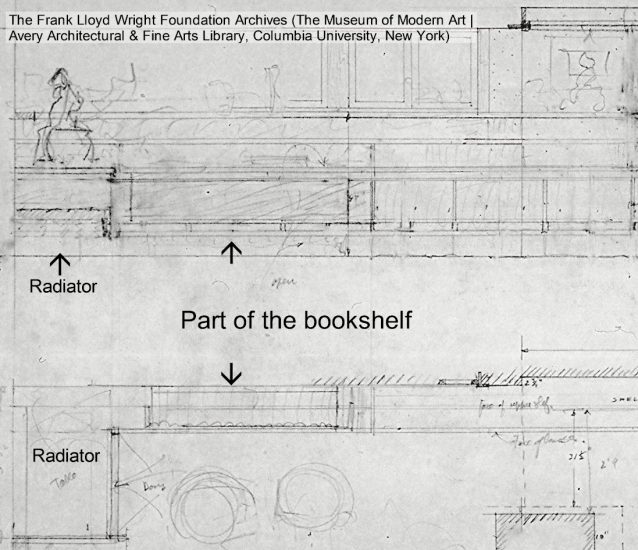 The Frank Lloyd Wright Foundation Archives #2501.051. Note that this drawing has been cropped.

I was lying on the stone floor cleaning the underside of the bookshelves, which I pointed to in the drawing above. The photograph at the top of this page shows the shelf that I was lying under.

While was working, I saw this dark mark on the underside of the shelf.

I don’t have a photograph, but my illustration below is basically a drawing of the shape I saw:

It took me a moment or two to realize what it was. I was seeing a burn mark from an iron. Someone had been ironing, put the iron down, got distracted and left this mark. Later on, the piece of wood was turned over and re-used as the bookshelf.

Writing this post made me look up information on irons.1 It appears that, given the solid dark color, that this was from a “sad” iron. The “sad” iron was the solid metal iron that wasn’t plugged in (“sad” is Old English for “solid”).

According to what I read online, irons have been around for millennia and they started to become electrified in the 19th century. And, while the “first electric iron was invented in 1882”, for decades,

… most regions of the United States didn’t have electricity, and those that did, only had it only at night for lighting. Earl Richardson in Ontario, Canada, was the first to convince the local electric company to run electricity on Tuesday, ironing day. However, a good number of women, particularly in rural areas that were late getting electricity, held onto their sad irons well into the 1950s.

Given how Taliesin, by the early 1950s, was no longer getting electricity from the Taliesin dam,2 electricity still might have been spotty. So it’s possible that members of the Taliesin Fellowship had the older type of iron on hand for consistent use in ironing. Or maybe the burn mark happened decades earlier, and this was a piece of wood that had been saved for any future need.

I hope you enjoy yourself if you ever take a tour at Taliesin. However, please do NOT get on the floor on your hands and knees looking for the burn mark from the iron. It’s on the underside of the shelf and, aside from alarming everyone around you, you’ll have to get back up off the ground, without leaning on any of the original Frank Lloyd Wright-designed furniture in the room.

1 I should try to remember all the things I’ve learned while working around Taliesin. The “sad” iron is one of them. I’ve also learned what the Wisconsin state bird is (the Robin, natch); about the flooding of the Seine River in Paris in 1910 (written about by Wright in his autobiography); the history of Unitarian Universalism (the religion of Wright’s Welsh family); and what “Sloyd” is (his aunts used it in their Hillside Home School).

And that’s just off the top of my head.