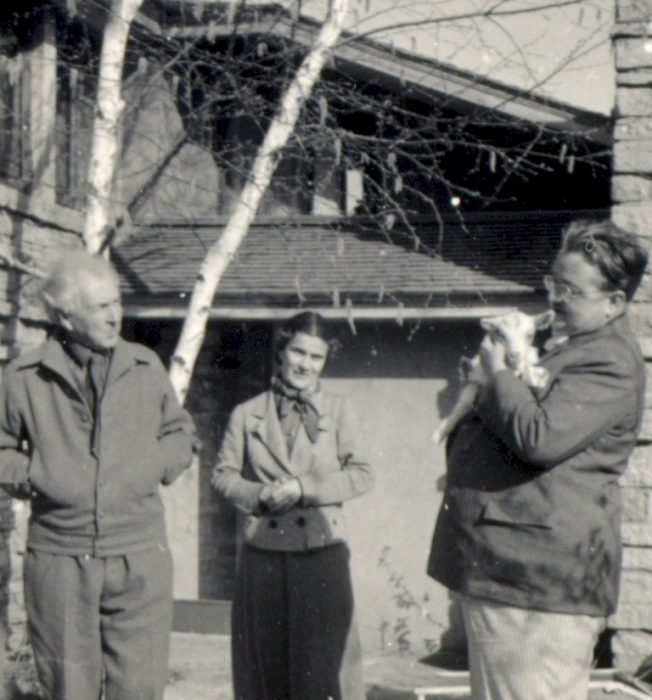 Frank Lloyd Wright (left) with his wife, Olgivanna, and friend, writer Alexander Woollcott outside the architect’s home, Taliesin, 1935-43. Woollcott holds a baby goat. The west wall of a bedroom is in the background. This became Wright’s bedroom in 1936.

My years of working at Taliesin Preservation gave me time to uncover the history of Wright’s changes at the Taliesin estate. Although (no surprise, I admit), most of my interest centered on the Taliesin structure by Wright (his home, studio, and former farm).

In trying to figure out Taliesin’s history, I spent time looking at copies of his drawings. While I was/am always cautious toward them, I came to trust some that actually seemed to match what existed.

You’ll see them or a link to them in my post today.

Wright drew elevations in the early 1920s of the portion of Taliesin on which he was adding a guest apartment. This work was done after he returned from working on the Imperial Hotel in Tokyo.

I noted this change when I wrote about Taliesin II (Taliesin’s forgotten middle child).

I think Wright added this “Guest Apartment” to increase the attractiveness of coming to Taliesin. Even today, you’re about a 45-minute drive west of Madison, the Wisconsin state capital. Moreover, in the early 1920s the only place to stay was in the village of Spring Green (three miles away), which had one hotel. This was a three-story building with the Hotel Myers and a restaurant on its first floor named the Dutch Kitchen.2 And in the 1920s, you couldn’t have even gotten a Brandy Old Fashioned there.

Thus, the architect designed a guest apartment (without a kitchen) at Taliesin. The two bedrooms, living room and separate bathrooms were on the same floor as the architect, separated by his own rooms by a door.

Then, the second fire happened

The April 20, 1925 fire destroyed Wright’s living quarters and he began rebuilding that summer. The reconstruction included the guest apartment. A Taliesin III drawing shows part of this in the drawing linked to here. It’s an elevation and floor plan on one sheet, labelled as “guest living room”.

A door separated the “guest living room” from everything else on the floor. This door was seen in the photograph in my post “About a Wall at Taliesin That No Longer Exists”. It’s the open door on the left-hand side of the photo.

While ups and downs in Wright’s life after 1925 kept him away from Taliesin, he and his family were there in 1928 and he wanted to invite someone to his “guest quarters” when everyone was living again at home. I know this because of a letter that I found on one of my trips down to Frank Lloyd Wright’s archives when they were still at Taliesin West in Arizona.3

As I’ve written, as Wright was the architect, he didn’t have to ask permission to change whatever he wanted. So, there are very few (or non-existant) letters or telegrams to pinpoint changes. As a result, I looked for details (and, goodness, still do) in any way that I could.

What did I find?

Since I read letters between Wright and people he knew, I looked into those between him and friends, employees, etc. I knew writer Alexander Woollcott visited, so I read those letters. And, in 1928, soon after Wright and his family had returned to Taliesin, Wright invited Woollcott to visit, even encouraged him to bring a friend. On page two of this letter he wrote:

. . . . You could have my little studio with a big stone fireplace to write in, and he or she could have a little studio nearby to draw in. We would look [hook?] you up together in the guest quarters back of the house,—two bedrooms and a sunny sitting room with a big fireplace in it. . . .

Those “two bedrooms” at the “guest quarters back of the house” are the ones I’ve been writing about.

I recognized this sunny room with the big fireplace in it. It’s in the photograph below. The photo was published in the March, 1929 issue of Liberty magazine:

This image is published in the Journal of the Organic Architecture + Design Archives, volume 6, number 1, 2018, 73. That’s available through here.

I’m not sure how often these two rooms were used for guests. Anyway, in 1936, Wright changed the two guest bedrooms into separate bedrooms for his wife and himself and then re-designated their former bedroom as the Guest Bedroom.

OH, and one last point:

Wright’s letter to Woollcott shows that the architect thought of those two rooms as guest rooms. But on a practical level, originally they might have been planned as bedrooms for the daughters Svetlana and Iovanna.

I thought about all of this last year, and these thoughts evolved into a presentation on Wright’s changes to Taliesin for Iovanna, which I did for the Monona Terrace “Virtual Wright Design Series” in October of 2020. That presentation, “Life Is Not Monotonous at Taliesin” is on Youtube, here.

1 This means that I will not trust anything that man put into a drawing unless I see a photograph of it. “Fool me once…” etc.

3 I would have spent useless time during my first trip to the archives if the registrar hadn’t taken pity on me and got me a very nice listing of correspondence about the actual Taliesin structure, and not just everything latter that contained the word “Taliesin”. Taliesin was mentioned in letters from people wanting to join the “Taliesin Fellowship”, or everyone wanting to get the magazine they put out for a while entitled “Taliesin”. It was so great when the Director and Curator of Collections at the Frank Lloyd Wright Foundation gave me this modified list.