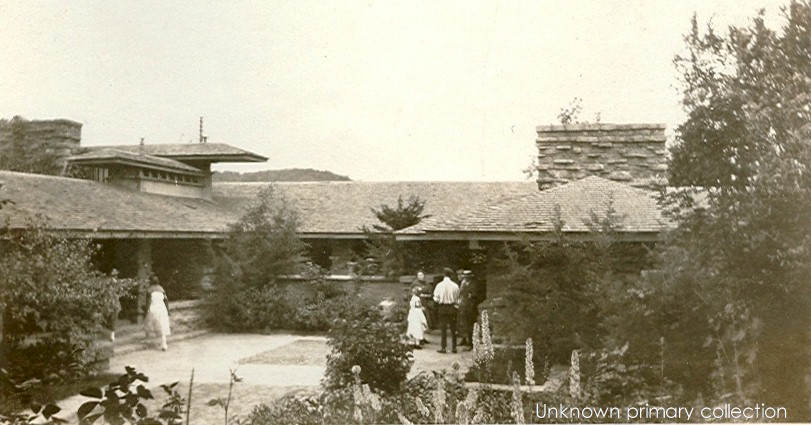 The photo at the top of this page shows the living quarters of Taliesin: the portion of the building rebuilt after the fire of 1914 and destroyed in the fire of 1925. Someone took is around 1922.

Taliesin II gets lost because Wright built it after the 1914 fire (caused by an act of violence). Then, an electrical power destroyed it again, in 1925. The home that exists today was where Wright lived when:

Although, as of 1939 his main studio in Wisconsin was his newly designed and built drafting studio at Hillside2 on the southern part of his Taliesin estate (which I wrote about in an earlier blog post).

So Taliesin II gets overshadowed

Still, by the time he finished with the Imperial Hotel, he had added two more rooms to Taliesin’s living quarters (on the ground floor and one above that). Then made that part of the building taller.

Here’s that part of the building in the early 1920s: 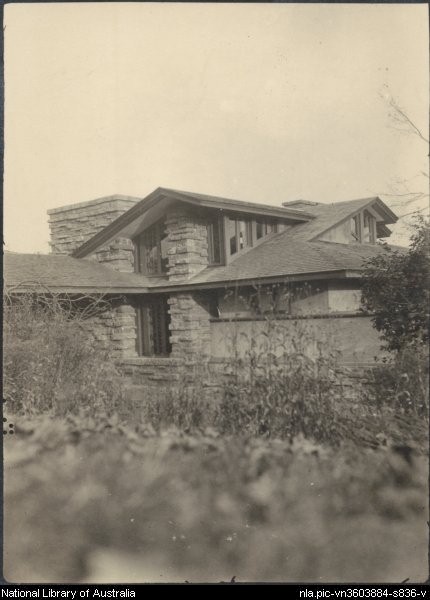 The photo comes from the National Library of Australia

Take a look at this page, where you can get more information on the photo. It comes from the collection of Eric Milton Nicholls, architectural partner to husband and wife architects Walter Burley Griffin and Marion Mahony Griffin.

If Taliesin II had stood longer, more photographs would exist of it.

Plus, the reason for less photographs is that Wright was out of the country for large chunks of time from the late 1910s to the early 1920s. He didn’t return to live full time in the United States until 1922, after he had finished most of his work on Japan’s Imperial Hotel. Then things went sort of “sideways” with his longtime partner, Miriam Noel.

My personal opinion is that those two seemed to bring out the worst in each other. You can read about her in Meryle Secrest’s Wright biography (don’t be afraid of its number of pages—someone told me to skip the first 100). Another book is Frank Lloyd Wright: A Biography, by Finis Farr.

Or you can read the fictionalized Miriam in The Women, by T.C. Boyle.

Wright met Olgivanna Milanoff about six months after Miriam left. Olgivanna, who married him in 1928, moved into Taliesin by January 1925.  On April 20 of that year another fire (probably because of bad wiring) struck Taliesin. It destroyed Taliesin’s living quarters. No one died, but Wright lost thousands of dollars worth of Japanese art bought. While he worked on rebuilding Taliesin, Noel found out about Olgivanna (now pregnant with her and Wright’s child). Miriam’s discovery resulted in more bad press and career problems (even before the stock market crashed in 1929).

Although, when you know where to look, you can find photographs online of Taliesin II.

I’d love to plaster this page with Taliesin II photos, but I think I’d get into trouble (copyrights and all that). So, I will show where you can find these images for the rest of my post.

There are a couple of places where can you find Taliesin II photographs in print:

Nicholls worked in the office in Australia of architects Walter Burley Griffin and his wife, Marion Mahony Griffin.

The site shows seven photos taken on the Taliesin Estate: five show Taliesin II, one shows the dam and waterfall, and one shows the Hillside structure. Of these seven, the Griffins took some when they visited the U.S. in 1924-25 (like the photo I showed above). But one shows Taliesin II a little earlier: https://nla.gov.au/nla.obj-150233395/view. It looks like it was taken around 1917, before the Griffins went to Australia.

Links to the five other photos:

Here are other photographs, most at the Wisconsin Historical Society:

1 Some say the words Taliesin I, Taliesin II, and Taliesin III shouldn’t be used. That using these numbers imply the building was completely destroyed twice with a new one built on top of the ruins. But the Taliesin fires only destroyed 1/3 of the building (but not its drafting studio or farm wings).

While I don’t commonly call the house that stands “Taliesin III”, I use those terms because Wright wrote them in his autobiography. Even if someone says he’s wrong, I’m not going to disagree with his choices because Taliesin was his house, and he was a lot smarter than I am or ever will be.

2 And, in a a moment of a snake-eating-its-own-tail thing, I first wrote the Wikipedia page about Hillside that I linked to. I’m using it here to back up my  assertion. I’ll try not to link back to this blog post if I update the Wikipedia page on how much work Wright did at the Hillside drafting studio.

3 He labelled it as a pigsty in a floor plan, but someone told me that Wright used it as a goat pen. Probably because even randy goats can smell better than pigs.

4 I asked people who’ve worked in architecture what term I should use to describe Nobuko Tsuchiura. I didn’t know if “draftsman” was proper, and “draftswoman” seemed odd. Someone suggested “draftshuman”, but I thought I should go with something that is more commonly used nowadays. “Draftsperson” was the most suggested so that’s why I put that here.