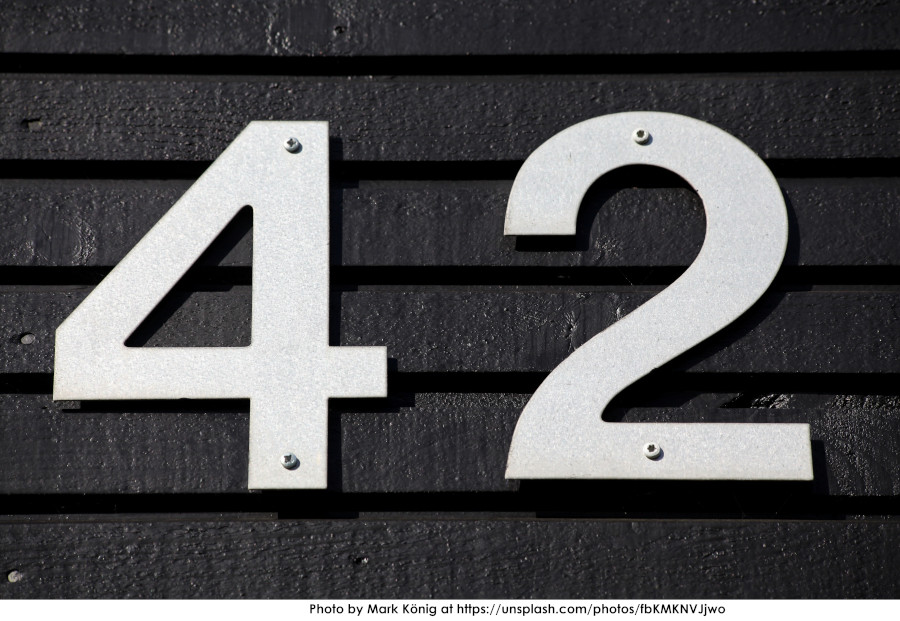 Things I learned at Taliesin

To know why the top of the post says the number “42”, read The Hitchhiker’s Guide to the Galaxy, by Douglas Adams.

I know these things –

through my work at as the Taliesin historian, when I worked in the Taliesin tour program, and/or I answered weekly questions in the “Hey Keiran” feature. You’ll see a variety of things here. Remember –

is the American Robin. 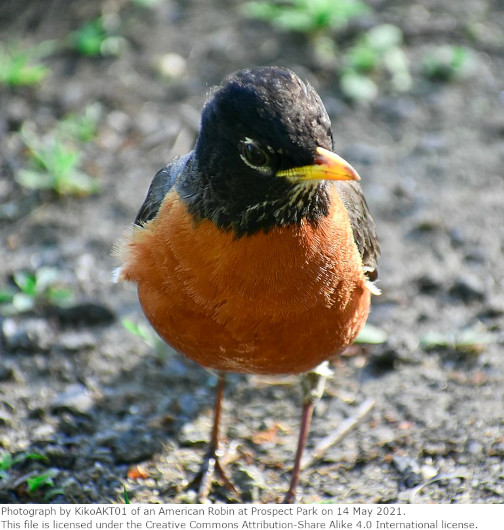 is the Wood Violet

Nakoma and Nakomis are the parents of the fictional character, Hiawatha2 (from Longfellow‘s “The Song of Hiawatha“)

Frank Lloyd Wright designed statues of them for an unbuilt project in Madison. Then he reproduced the statues in small sizes.

He put statues of Nakoma and Nakomis both inside his Hillside structure, and in Taliesin.

Even though Wright was wrong on the gender. In Longfellow’s poem, Hiwawatha’s mother being is NOKOMIS. Wright made his father Nakomis.

Some photos of the statues are below:

In the Assembly Hall at Hillside

There is a smaller version of Nakoma, as seen in a video tour on-line: 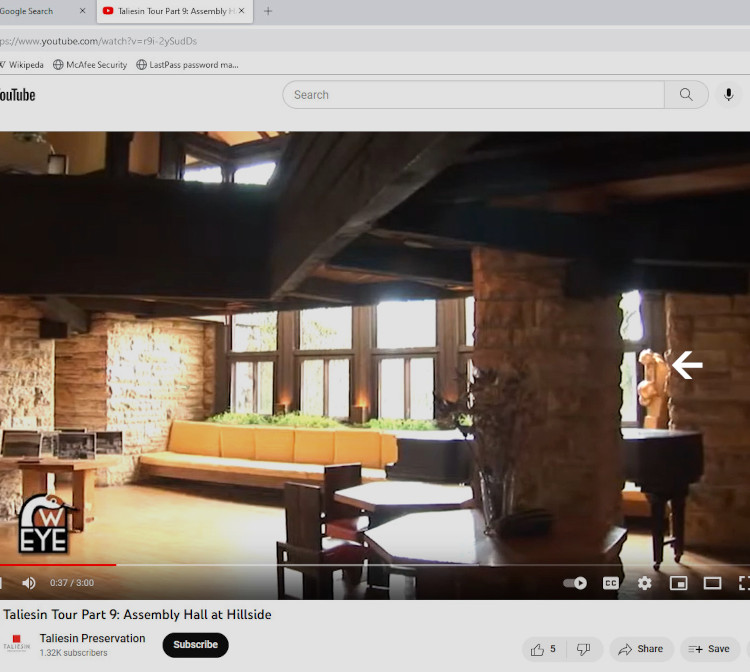 I took this screen grab from a video tour I did in 2009. Taliesin Preservation it online thanks to producer/editor, Claudia Looze.

And a smaller pair of them are at Taliesin:

You can see the small versions in Taliesin’s living room on the light deck. The photo below shows them in 1955: 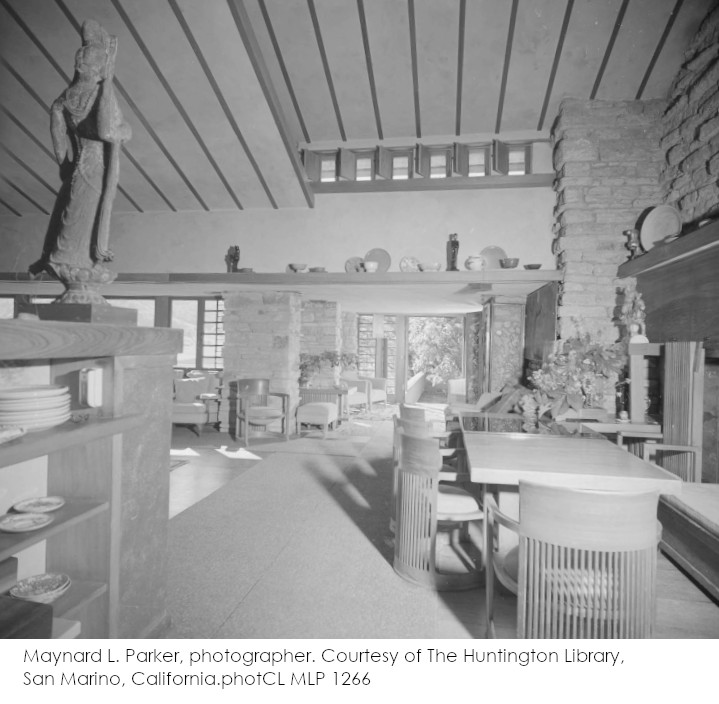 This is an unpublished photograph of the set that photographer Maynard Parker took in 1955 for the November issue of the magazine, House Beautiful.

They snoozed all day, so these bats didn’t start my screamy-phobia of them, like I posted about.

And I learned that barn swallows eat mosquitoes, too

Mosquitoes can get very bad at Taliesin, and barn swallows fly around Taliesin all summer. Preservation Crew member, Kevin Dodds, took a photo of baby barn swallows in their nest. He gave me permission to post it below: 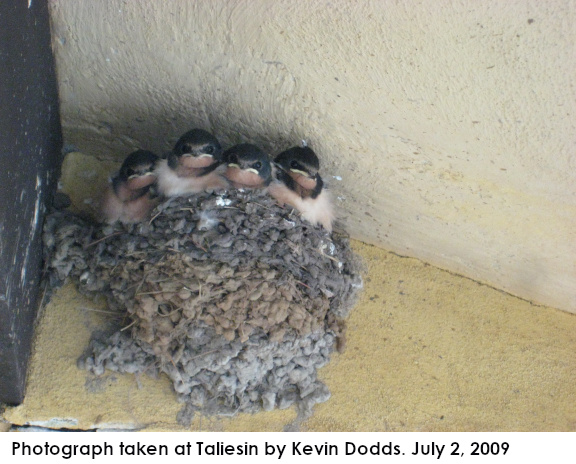 The swallows are in a little mud nest at Taliesin. You might see swallows early in the summer on a 2-hour House Tour or the 4-hour Estate tour.
This photograph shows the nest under the roof near Taliesin’s ice house. Permission for photo from Dodds.

Adventures in Frank Lloyd Wright’s life taught me the definition of the “Mann Act“ (before  Eliot Spitzer’s prostitute scandal in 2008).

The Mann Act “criminalizes the transportation of any woman or girl for the purpose of prostitution or debauchery, or for any other immoral purpose.” [here’s a link on it from Cornell Law school] It was designed to stop human trafficking, but was also used by women whose husband’s abandoned them for other women. So, Wright’s second wife, Miriam, tried to use it on Wright after he fled Wisconsin for Minnesota in 1926 with his future wife, Olgivanna.

Plus, he was almost being arrested for it in the 1910s.

I know the date of Japan’s Great Kanto earthquake.

So, I’m sure plenty of other people know about it. It mostly destroyed Tokyo on September 1, 1923. But I know it because of Frank Lloyd Wright. His Imperial Hotel in Tokyo was supposed to see its grand opening that very day. The fact that the building survived made Wright world-famous.

I know what a “Quit Claim deed” is

Chief architect of Taliesin Associated Architects and Wright’s son-in-law, Wes Peters, bought up the Taliesin estate one or two times, then sold it back to Wright for $1 in a Quit Claim deed.

I probably first read this in the biography on Wright by Meryle Secrest.

The definition of the word “jocund”

That’s in a poem stanza in the fireplace at the Hillside Assembly Hall. This is footage of me speaking in front of that fireplace. I don’t know if I talk about the poem that’s carved into its mantle. The stanza of the poem is from “Elegy Written in a County Churchyard” by poet Thomas Gray.

Oft did the harvest to their sickle yield,

Their furrow oft the stubborn glebe has broke;

How jocund did they drive their team afield!

How bow’d the woods beneath their sturdy stroke!

Oh, and 3 more things about this poem:

I know what a hydraulic ram is

I think I covered this in my post, “My Dam History“. My photo from that post is below:

and he and his brother invented the hot air balloon.

My knowledge on the second fact didn’t come from Taliesin. I know it because another Taliesin guide told me (hi, Nath!).

I know the name of the last king of Iraq:

He commissioned Wright to design an opera house in the capital city of Baghdad. The reason the commission never went further is because he was overthrown in 1958.

A Balalaika is a Russian, stringed instrument.

A tall, decorative metal container that holds water for boiling is called a samovar. One sits just outside of Taliesin’s living room. Here’s a photo showing it at Taliesin, taken in 2018: 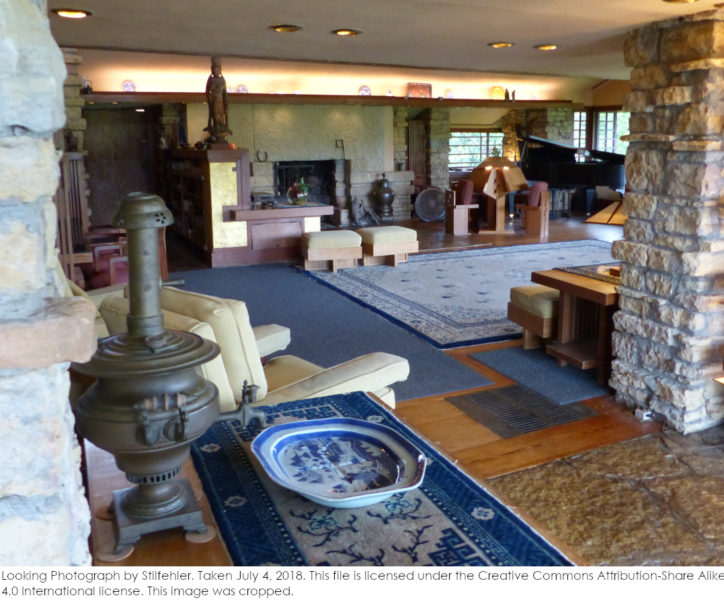 The samovar is on the table in the foreground.

You can see the drawing showing the chicken coops below. It’s also in my post “Unfinished wing” (read that post and you’ll know why “Hog Pens” is highlighted in the drawing below). 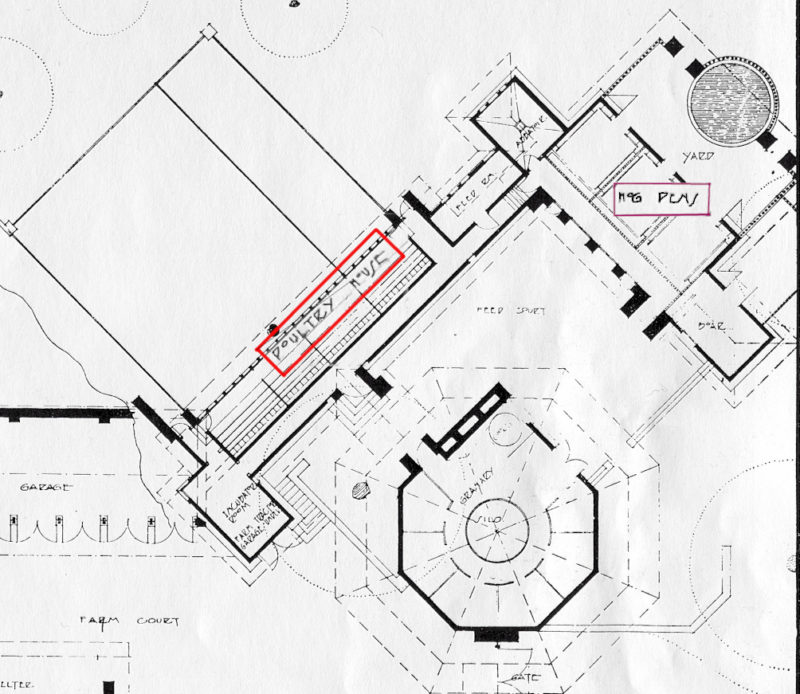 The drawing was originally published in Wendingen Magazine during issues it published on Wright in 1924 and 1925.
Then the magazine issues were published as a book, The Life-Work of the American Architect Frank Lloyd Wright, by Frank Lloyd Wright, H. Th. Wijdeveld, ed. (Santpoort, Holland: C. A. Mees, 1925).

An oar lock on a Venetian gondola is officially called a Forcole.

I know that because there’s an oar lock in Wright’s bedroom that was a gift from students in Venice. Here’s another photo by Maynard Parker that shows it by the east wall. It’s the wooden piece that looks like sculpture:

Published January 20, 2023.
The photograph at the top of this post is by Mark Konig from https://unsplash.com/photos/fbKMKNVJjwo

2 There was a man named Hiawatha in the history of the Iroquois Nation, but he’s completely different than Longfellow’s Hiawatha.

3 This photo was also published in House Beautiful magazine, October, 1959, 232.