Abstraction looking (plan) north at Taliesin against the hill in Wisconsin.
Pen, ink, and paint. By Gene Masselink.

Gene was born in South Africa, then his family moved to Grand Rapids, Michigan, where he grew up with his brother, Ben. A talented visual artist, Gene came into the Fellowship with a BS in painting from Ohio State University. The Taliesin Fellowship wasn’t only a group for architectural apprentices, and Gene didn’t join intent on doing architecture. He did, however, paint and illustrate within the group for years, including the image of Taliesin up at the top of this page.

And, as many Fellowship members did, he helped build models. Here’s a 1936 photograph by Edmund Teske showing Gene working a model of the Johnson Wax building:

How Gene became the secretary:

When he came into the Fellowship in 1933, Karl Jensen was the secretary (this is a photo of Jensen at Taliesin). Gene became Karl’s assistant. Therefore, when Karl left in 1934, Gene took over the job. Subsequently, Gene became was one of the “triumvirate” of crucial Fellowship members. This triumvirate was composed of Gene, Wes (Peters, engineer), and Jack (Howe, head draftsman). The Fellowship wouldn’t have been the same without Gene, just like it wouldn’t have been the same without Wes & Jack.

In fact, on the last page of his 1943 autobiography, Wright specifically thanked Gene:

Gene (Masselink) of the Fellowship and his helpers have untangled day by day, month by month, the mass of inter-lined and defaced scripts that would tease anyone, especially myself. Gene is the only one who could read them.

Having both seen Wright’s handwriting, and his small edits that are hard to keep track of, I applaud Wright’s recognition of Gene’s work.

Here’s Gene with a couple of “the boys” and The Master: 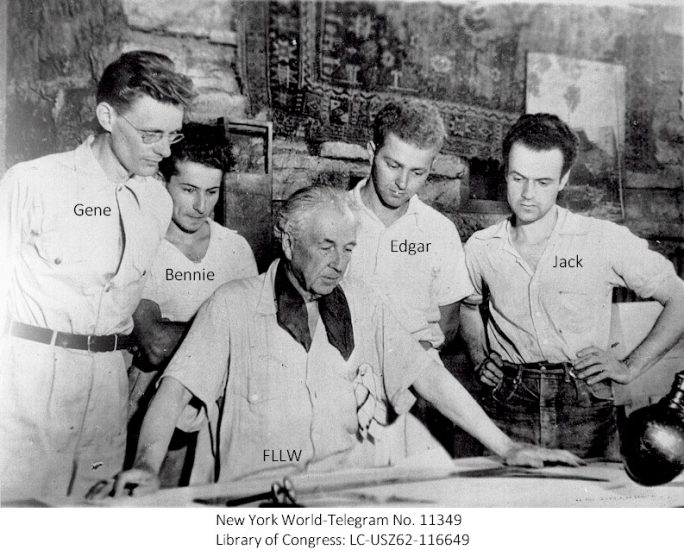 Looking (plan) northwest at Wright at a drafting table in the Taliesin studio. Standing behind him are (L-R): Gene Masselink, Bennie Dombar, Edgar Tafel, and Jack Howe. This photograph is from the Associated Press and is in the public domain. The Library of Congress says the photo was taken in 1953. However, they’re wrong. Wright was not in his 80s in the photograph above, and both Bennie and Edgar left the Fellowship in 1941. This photograph, on the other hand, has Gene and Wright in this same room in the 1950s.2

Yet, this is not a post about him just as an artist. No, I decided to write about Gene today because I just genuinely like the man (who passed away before I was born). Gene’s way of keeping everything together at Taliesin reminds me a little of the character of Walter “Radar” O’Reilly from M*A*S*H*.

He jumped in as, I think, Wright envisioned the Fellowship—everyone together, all for one, one for all. And he seemed to have a sense of humor about all of it. You’ll see it in his “At Taliesin” article from 1935 below.

Below, Gene writes about his responsibilities as the secretary in the August 4, 1935 “At Taliesin”:

“Have I a little list?  Koko was only an amateur with his.

Remember in “Physical Taliesin history” (fn1) how I said that working at Taliesin made me learn about things? I just learned how “I have a little list” is related to Gilbert and Sullivan musicals.

Lists – lists everywhere and lists for everything.  Large important Madison lists on large white paper.  Spring Green lists on any old paper.  Dodgeville grocery and butcher lists on ruled note-pads from the kitchen.  Lists typewritten and lists handwritten in every kind of pen and or pencil within reach.  Lists lost and half remembered – they flutter about me dominating my kingdom of letters and articles and filing cards and endless odds and ends of what is bravely called “business”.  The word should be spelled busy-ness, or why not busy-mess.  But the list is only embryo compared with the listers actually getting what the list lists.  There are so few who will stand to wait longer than three days for what they’ve listed and at the end of that time a package of cigarettes or “Plowboy” or “Red Man” or one spool of thread or a pound of 6-penny casing nails will assume terrific proportions.  Not my peach only but my life is continually jeopardized by little lists.

Gene about listening to the radio!

This links to my love of Old Time Radio that I wrote about in this post.

Gene was in the hospital after breaking his hip and was bedridden. He wrote about his experience in the hospital, and about passed the time listening to the radio:

. . .  After this is all over and I’m selling apples on some street corner, this Radio will sell apples with me.  My mind has become so controlled by its direction that any sudden break from its supervision would be fatal.

The Life problems of Bill and Mary and Susan and Jim of all the Tom Dick and Harrys radio story tellers can think of are my problems now.  And let me say that these problems are without parallel in the history of literature.  Each day fresh heartaches and new situations keep the agony of life constantly on the run and bring vicarious sorrow into the lives of Americans, incidentally make my own hip-problem only the most minor consideration for me to think of. . . .

It has opened the walls of this tiny room to a world many times removed and I maintain wherever I go it shall go.

Its love me, love my Radio from now on.

Gene by someone else:

Gene showed up in Taliesin Diary: A Year With Frank Lloyd Wright, by Priscilla Henken. Here’s Priscilla on November 16, 1942 (p. 59):

“… Gene always speaks hurriedly & nervously as if he were doing ten things at once & only nine were getting done.“
Former apprentice Curtis Besinger dedicated his 1995 book, Working With Mr. Wright: What it Was Like, to Gene Masselink. Besinger wrote,

As Mr. Wright’s secretary for many years, Gene’s grace, awareness, and sense of humor served to anticipate and ameliorate many of the strains of Fellowship life. Unfortunately he didn’t live to write the book which in some stress-filled situation he threatened to write: “Mr. Wright goes to New York…, to Italy… to Paris

Curtis Besinger. Working with Mr. Wright: What It Was Like (Cambridge University Press, Cambridge, England, 1995), xiv.

In the 1950s, Gene began designing murals for the following buildings by Wright:

While Masselink’s original icons were removed from the altar, they can still be seen in the basement. See Mark Hertzberg’s blog post about the church to see photographs of the icons.

Others have investigated his work. Check these out:

Published January 31, 2022.
The drawing at the top of this post is the property of The Frank Lloyd Wright Foundation Archives (The Museum of Modern Art | Avery Architectural & Fine Arts Library, Columbia University, New York).

1. I can’t imagine that would have been possible for him to print all of the copies of the 1943 edition of the autobiography. However, I’ve seen letters that Gene wrote to Jack Howe, describing the activities. Plus, “Gene’s Press Room” is the name of a room at Taliesin.

2. Bonus: the Wisconsin Historical Society has another photograph taken of Gene that day. He’s seen in the same clothes walking in Taliesin’s Garden Court with another Fellowship member, Kay Rattenbury (1918-1996).