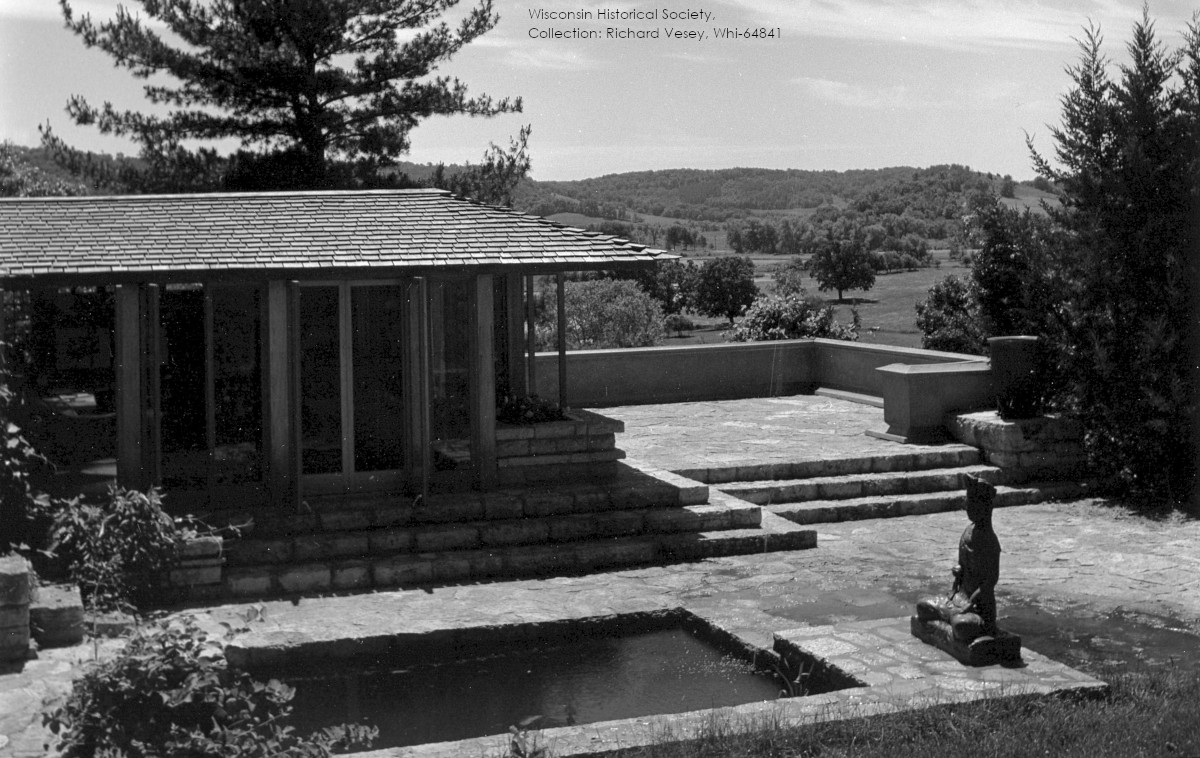 Looking (plan) southeast from the Taliesin Hill Crown toward the Plunge Pool terrace, with Wright’s newly-expanded bedroom on the left. Most of the landscape you see in the distance is the Taliesin estate.

I think something that Wright did at Taliesin West (in Arizona) inspired him in a change he made at Taliesin (in Wisconsin). That change was within the work as he expanded his bedroom in 1950.

Yes: here’s a quick and dirty history of the room:

It was originally constructed in 1925, then became his bedroom in 1936.

(he probably did some more changes at that time, but I haven’t figured them out yet)

And, in 1950 he expanded his bedroom to its current configuration (that one sees on tours). That change was accomplished by further building out the room onto the existing stone terrace that he had initially constructed in 1936.1

While Wright himself didn’t specifically say this, the change was apparently made for a photograph. That’s because Architectural Forum magazine was doing a piece on Wright that included an insert on Taliesin.

I like to say that Wright was “sprucing up the house” for the photo.

The photo shows Wright sitting at his desk in the bedroom and was taken in the fall of 1950 by Ezra Stoller and published in the January 1951 issue.

(Since the firm that Stoller founded, ESTO, is specific about people using their images

[like, I wouldn’t be surprised if they came after my ass for showing the photo even if I linked to their org, and even if followed “fair use” ]

so I’m not gonna show it here. But you can find that issue of Architectural Forum online. That issue is scanned & reproduced here.
It’s a 190 MB pdf [Portable Document Format], to give you a sense of how long it would take to download.

Anyway, that’s not what I’m here to talk about.

I’m here to talk about other changes he made at the same time around his bedroom.

That’s because I was lying in bed a couple of nights ago when it occurred to me that the changes that Wright made in 1950 right outside of his bedroom were influenced by the spatial arrangements he had used at his winter home, Taliesin West.

I do some of my best Taliesin thinking at night. Unfortunately, I often forget a lot of what I think about,2 but on this occasion, I got out of bed and wrote it down.

So on this post, I’m going to explain that.

Here’s part of what Wright wrote in his autobiography in 1943 about Taliesin West:

Taliesin West is a look over the rim of the world….
There was lots of room so we took it…. The plans were inspired by the character and beauty of that wonderful site. Just imagine what it would be like on top of the world looking over the universe at sunrise or at sunset with clear sky in between…. It was a new world to us and cleared the slate of the pastoral loveliness of our place in Southern Wisconsin. Instead came an esthetic, even ascetic, idealization of space, of breadth and height and of strange firm forms, a sweep that was a spiritual cathartic for Time if indeed Time continued to exist.

In fact, Wright changed a lot of things at Taliesin based on his winters in the Arizona desert. Only some of those things took place in the 1940s, like what I wrote in the post, “In Return for the Use of the Tractor“, he took advantage of the fact that he didn’t have to deal with Wisconsin winters anymore.

However, I hadn’t thought about changes that he made to the vistas around Taliesin due to what he’d observed in Arizona.

Not until that recent night.

Part of what I’ve noticed at Taliesin West (and I’m not alone) that he was using the exteriors of the structures to point your eyes to certain places. I think that’s part of being on the “rim of the world.”

So, while I laid in bed I remembered how, when one is in Wisconsin, the terrace outside of his bedroom (changed when he did things in 1950) gives you views that frame the nature around it that kind of look like what he did at Taliesin West. 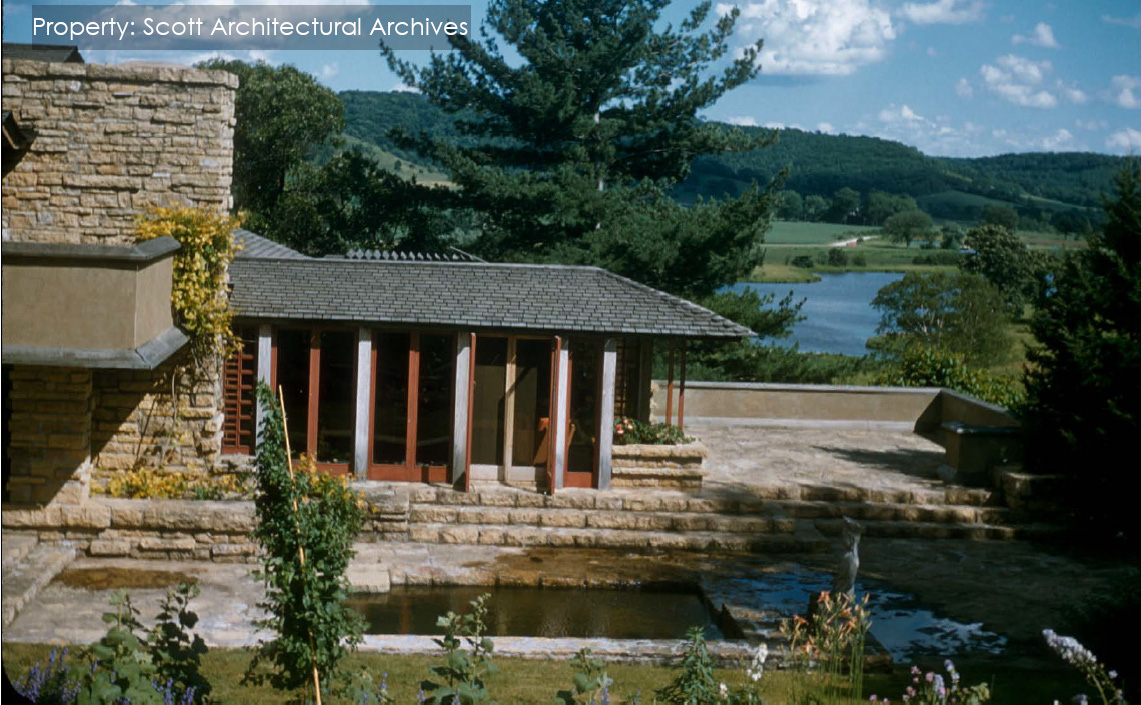 Courtesy, Scott Architectural Archives. Taken during the Spring Green Centennial of 1957. On that summer day, Frank Lloyd Wright and the Taliesin Fellowship opened up the Taliesin estate to “locals” and let them walk around all over. The photograph shows Wright’s newly-expanded bedroom on the left, with the hills across the highway (HWY 23) in the distance. By the time this photograph was taken, Wright and the Frank Lloyd Wright Foundation owned almost everything that can be seen.

Compare to the photograph below that I took at Taliesin West early one morning in February 2007. Wright’s office is to the left, with steps leading to an upper level, with the McDowell Mountains in the background. 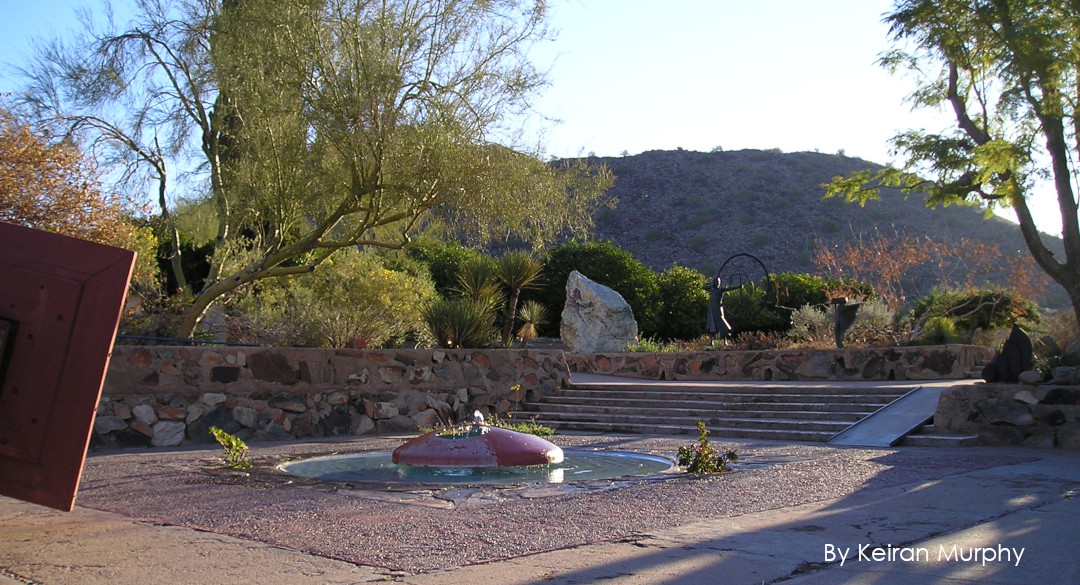 Compare the photo above to the Taliesin photo at the top of this post.

Moreover, about the photo at the top of this post:

I was confused about the puddles on the terrace (around and behind the Buddha) until I saw the photo from the Wisconsin Historical Society, below:

You can see the stream of water, the white vertical line from the pool, and in front of the balcony. The puddle on the flagstones is in the foreground from that little fountain. It’s to the right of the metal Buddha in the middle of the photograph.

It you were standing at that spot then turned around, you’d see the landscape and fields just south of the Taliesin structure.

another building on the estate. That’s the house that Wright designed for his sister, Jane. The photograph below was taken toward Tan-y-deri by Janet Caligiuri Brach. She took it on Sunday, April 24, 2022 while on a tour: 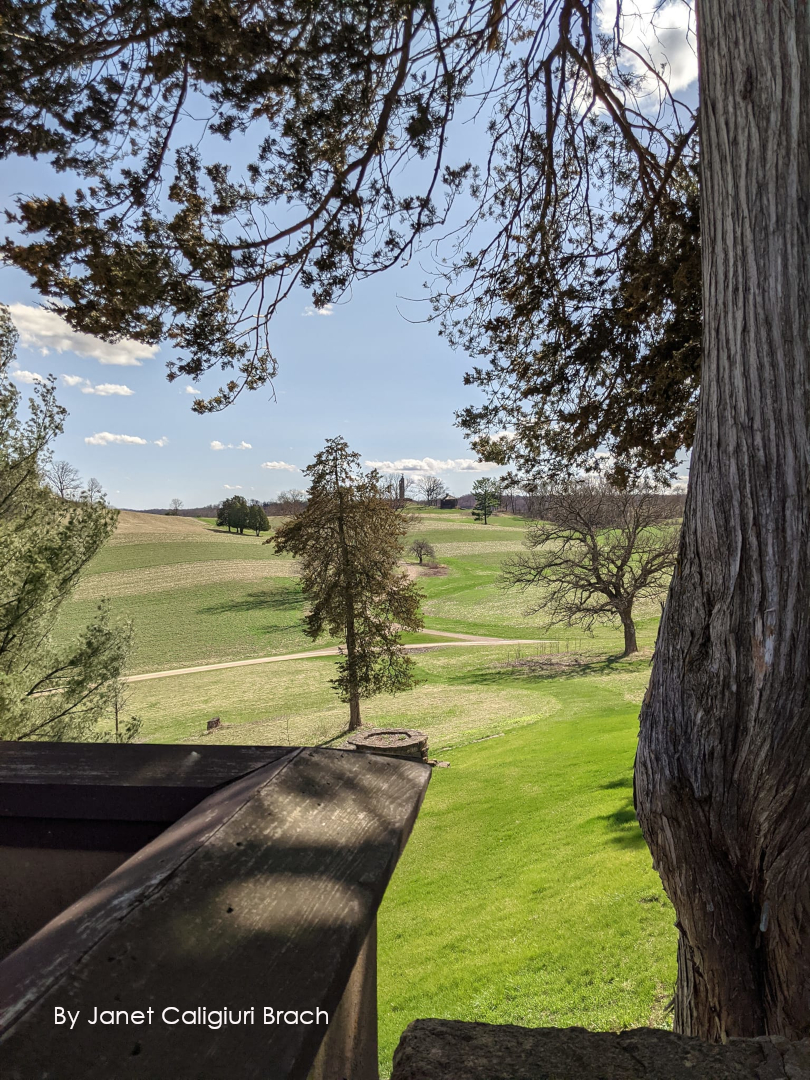 Taken at the edge of Frank Lloyd Wright’s Bedroom Terrace, looking (plan) south. At the mid-point is the tower. This is the Romeo and Juliet Windmill. Tan-y-deri stands to the lower right of “R&J”.

Oh, and before I go:

Here’s something else from Taliesin West that Wright brought to Taliesin in 1950. That terrace with the pool (called “the Plunge Pool Terrace”) ends with the same kind of masonry that’s used at Taliesin West.

This was a dry concrete that the apprentices put into forms, with the limestone facing out. They put newspaper or other things over the stone, so when they took away the forms, you could still see the rock.

You can see this masonry in another Taliesin West photograph of mine, that I showed in, “Taliesin is in Wisconsin“

I can show this type of masonry in a photo of the terrace that I took in 2005, below: 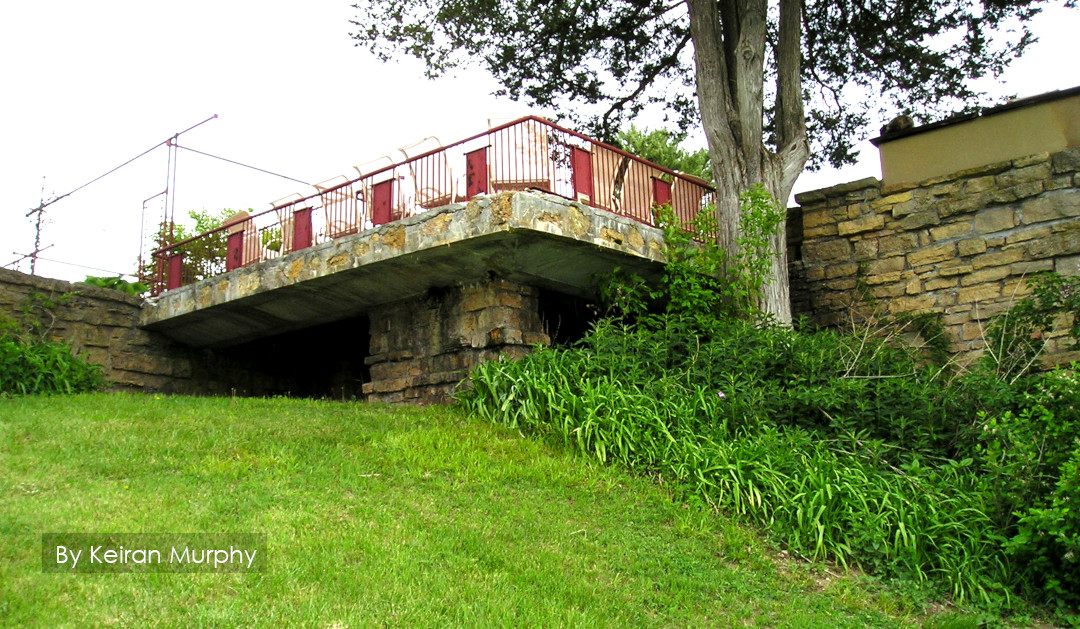 Looking (plan) northwest at the edge of the Plunge Pool Terrace with the that’s inspired by Taliesin West. This terrace was also apparently executed in 1950.

Published June 18, 2022.
The photograph at the top of this post is from the Wisconsin Historical Society – Vesey Collection, WHi-64841. Click here to get to their page with the image.