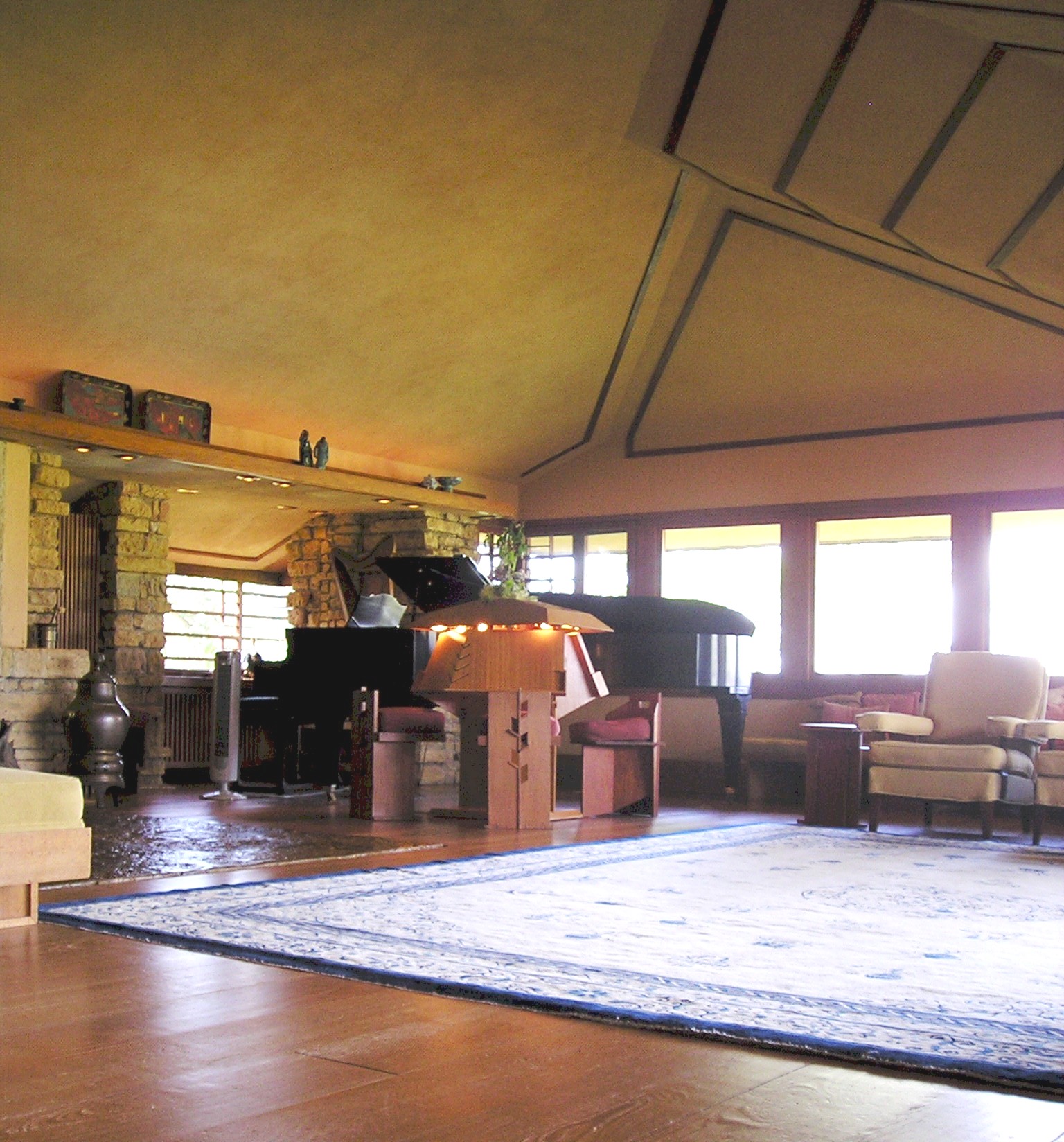 A photograph looking (plan) northwest in Taliesin’s Living Room. Wright’s Bechstein piano is in the background. There’s a photo of him at this piano, here, at the Frank Lloyd Wright Foundation website.

In 1994, when I was 26, I started giving tours at Taliesin. But, “I’m just a tour guide” is something I usually never said to people. I didn’t want them to feel obligated to say, “Oh, no! You’re much more than that!”

On the other hand, I was worried they wouldn’t say that at all.

Although, early on in my employment, I absorbed huge chunks of Frank Lloyd Wright information. This was definitely related to the fact that I was nearing graduation for my MA and primed for ingestion of data.

And yet, while I settled on telling people that I was “solely a tour guide”, for years this wasn’t really true.1

My years in the tour program:

Tour guiding is a long, complicated thing which I don’t feel I have the wherewithal to address (and how I became “the Historian” is another story, here).

Over the years I periodically started writing / adding to an unpublished book about being a tour guide. But I have not completed it. In part this is due to my “voice”. While trying to be funny, I sometimes unintentionally sound misanthropic. The title of my proposed book is an example: What Time Does the 1:30 Tour Leave?

See? Funny, but can be interpreted negatively.

Still, over and again I (and other staff) have marveled at those who wonder why someone would “only” be a tour guide. This statement implies that those asking / wondering can’t figure out “why” you would do something “that doesn’t pay that much”. No, it doesn’t pay much in money (moolah, cheddar, greenbacks).

The Taliesin estate in Wisconsin is one of the most complex works of art in the world which was designed / worked on / advanced by someone who is, by most counts, one of the greatest architects in human history.

Not that Wright is the best architect who’s ever lived

I’m just saying that, if you came up with a list of 25 people throughout the entire globe in all of human, built history (at least 6,000 years), Frank Lloyd Wright’s name is on the list. And yet Taliesin Preservation pays people to bring visitors through these spaces.1 It’s puzzling to me that anyone wouldn’t see that as something incredible.

Although I’ve got to think that the reason others feel that way is that they never experienced someone in their 70’s or 80’s telling them after their tour, that they’ve been waiting their entire lives to come to Taliesin. And some other things below.

Still, to get back to this post on tour guiding, I wanted to write about things I learned about Taliesin’s history while giving people tours (my current state of not giving tours, and not being the hired historian, is not my choice, by the way; Covid-19 and all). While nothing jumped out at me, what has risen, instead, are the memories of unique moments with guests. Small things that have stayed with me for years. I mentioned one above: the elderly woman who told me that coming to Taliesin was something she’d waited for her whole life. But there are others.

Some stories from tours:

One time, I had taken my group to the room next to Taliesin’s Drafting Studio and directed them toward Taliesin’s front door. We were in the area of the photograph below: 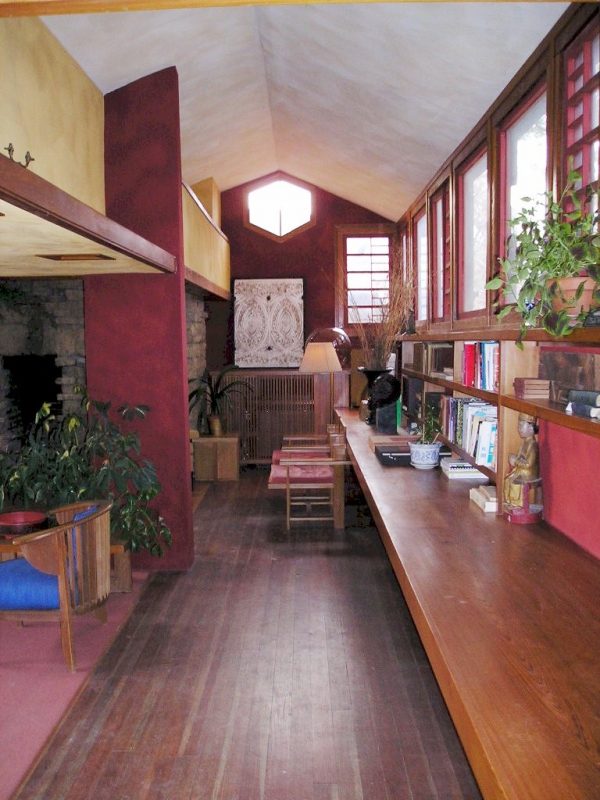 Photographer: Keiran Murphy
Looking west in Taliesin’s “Front Office”, which is next to Taliesin’s drafting studio.

While speaking, I suddenly noticed a woman crying at the back of the line. As a guide, I wanted to make sure that nothing was wrong, but I also didn’t want to stop everything and single her out, saying, “Excuse me: I see that you are crying. Are YOU OK?”

I kept my eye on her and it turned out that she was fine; smiling moments later when she walked by on the way to Taliesin’s front door. I understood immediately that she cried. . . well, because of the beauty of Taliesin. Its enormity had made her burst into tears.

Here are a few other moments:

Then there were outdoor experiences:

The photograph above is one of the distant views that would be seen on the Taliesin Walking Tours that were given through the 2005 tour year (there’s a “Driftless Landscape tour” at Taliesin that they have now). I had my own unique experiences on these tours. Some memories of these experiences are below:

Other interesting moments on the Walking tour:

Lastly, another impression from someone on a tour:

One time an Italian gentleman and his partner went through Hillside (Was she his wife? She was a woman around his age.) They didn’t speak a lot of English, which is my major language. I remember the gentleman really well because, as we sat in the Theater at Hillside he said, “there is so much geometry here. . . . But it is so free.”

I looked around the Hillside theater room with his eyes. I could see the “geometry” he mentioned, with round seats (constructed in metal) sitting at an angle, and the a boxed-design on the north and south window walls. And I agreed with him wholeheartedly.

I began to work more as the historian for Taliesin Preservation, doing research in projects (this preservation work now done by the Frank Lloyd Wright Foundation).