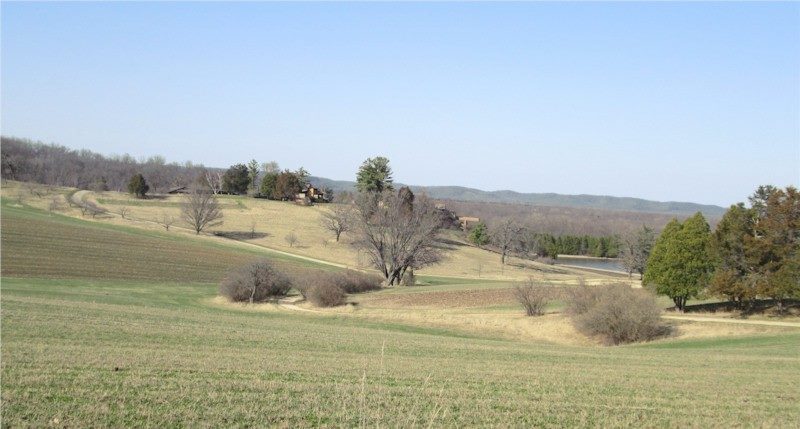 Looking (plan) north at Taliesin in the background in The Valley of Wright’s family.
I took this photograph in April 2015.

“Frank Lloyd Wright loved nature” is something a lot of us know (if you didn’t know that until now, just look like you’re thinking deeply about it and the Frankophiles won’t notice).

However, he didn’t always write straightforward statements on how he felt about it.

I can’t find evidence that Wright said or wrote this quote currently associated with him:

“study nature, love nature, stay close to nature. It will never fail you.”

Despite how great this quote is—Frank Lloyd Wright saying to pay attention to nature!! —its origin appears to be Carla Lind’s introduction to her book, The Wright Style: Recreating the Spirit of Frank Lloyd Wright.1

She wrote that “Wright told his apprentices” to “study nature…” But I’ve found no proof that those very words ever came out of his mouth or flowed from his pen. If Lind had not written that in quotation marks, I don’t think we’d see it everywhere.

I have come to the conclusion that the quote is like if I wrote, “Frank Lloyd Wright always said, ‘I love having pancakes on Saturdays.'”2

I’ve been searching Wright’s statements on nature to explain how he thought about it.

In fact, in 1957, Wright told interviewer Mike Wallace on television that,

“I attend the greatest of all churches.

I put a capital N on Nature, and call it my church.”

But, while it’s not a deep secret, you have to dig into Wright’s writings to find an explanation from him on what he loved about nature.

That’s why, in this post, I’ll explore Wright’s thoughts and feelings a bit more.

An example of Wright speaking about nature:

Because when you’re talking about Wright, “nature” doesn’t mean flowers, trees, or sunsets. Wright really meant the underlying geometry in nature. Here’s what he wrote in 1912 in a small book, The Japanese Print: An Interpretation:

Using this word “Nature” in the Japanese sense I do not of course mean that outward aspect that strikes the eye as a visual image of a scene…, but that inner harmony which penetrates the outward form… – what Plato called… the ‘eternal idea of the thing.’

When I say “Nature,” I mean structure seen as a matter of complete design within the thing itself, nature—pattern, that is….

His ideas on nature came in his childhood:

The young Wright was thrown into nature when he was sent out to “The” “Valley” in Southwestern Wisconsin to work on his Uncle James’ farm.

Yup: this area was known to the Lloyd Jones family as The Valley. With capital letters.3

Wright was there every summer from the year that he turned eleven until the year he turned eighteen.

This area, a spot of land south of the village of Spring Green, was settled and farmed in the 1860s by Wright’s maternal grandparents, Richard and Mallie Lloyd Jones. This was followed by their children (Wright’s aunts and uncles) living or working there. You can find out about the family by going to the website http://www.unitychapel.org/

The Valley in his writing:

It was important enough that Wright opened his autobiography with a story taking place in it.

A light blanket of snow fresh-fallen over sloping fields, gleaming in the morning sun. Clusters of pod-topped weeds woven of bronze here and there sprinkling the spotless expanse of white. Dark sprays of slender metallic straight lines, tipped with quivering dots. Pattern to the eye of the sun, as the sun spread delicate network of more pattern in blue shadows on the white beneath.

Referring to himself as “the boy”, he wrote about the link of his experiences to his feelings on nature and architecture:

And the trees stood in it all like various, beautiful buildings, of more different kinds than all the architectures of the world. And the boy was some day to learn that the secret of all the human styles in architecture was the same that gave character to the trees. 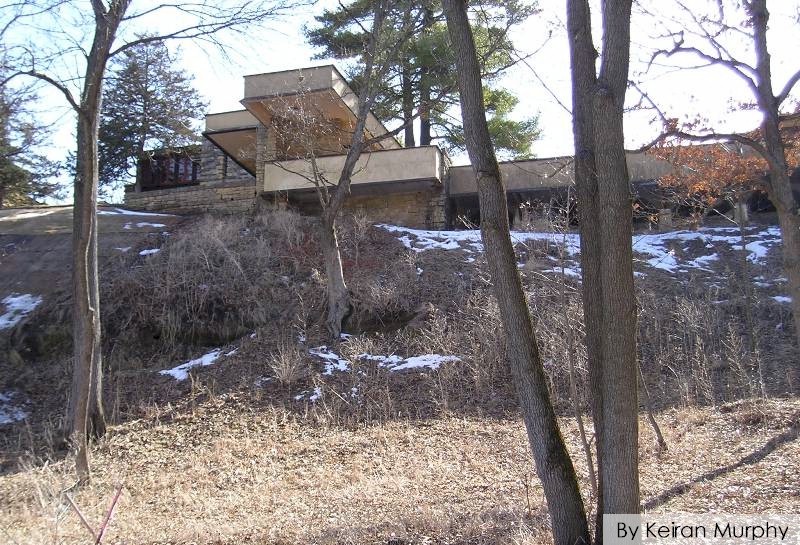 What’s above is a photograph of Taliesin, as the building seems to rise from the hill.
This was taken by me in March, 2008 looking up at Taliesin’s Lower Parking Court.

Furthermore, the family of Wright’s mother, the Lloyd Joneses, was really important to Wright. During those summers, Wright stayed with “Uncle James” Lloyd Jones.4

The Lloyd Jones family was Unitarian and very interested in Ralph Waldo Emerson and poet Walt Whitman. Historian William Cronon, from the University of Wisconsin wrote that:

The… popular view today is that romantics like Emerson or Thoreau, or… Wright, celebrated the beauty of nature in a literal sense much as many modern environmentalists do…. In fact, raw nature was… less compelling for most nineteenth century romantics that it is for modern nature-lovers. The romantics regarded plants and animals… as the outward manifestations of an all-encompassing spiritual unity whose name was God.

So nature, God, and underlying geometry. And geometry goes into architecture. It’s all linked. Only took me about two years to really start to understand it.

First published, October 20, 2021.
I took the photographs seen in this post.

1 I wrote one of her publishers asking if she could get back to me on this statement. I want to ask her where that quote came from. They didn’t have her contact info, so I wrote her in care of another former publisher. I’ll change this if I can ask her where she got that.

2 He was NOT devoted to pancakes. I understand that he liked steel-cut oats.

3 And, even though most of the Lloyd Jones descendants are settled throughout the world, they all know what they’re talking about when they say, “The Valley”. The Valley, by the way, is now known as Frank Lloyd Wright’s Taliesin Estate.

Although if that’s not available you can also rent nearby Aunt Margaret’s house. Her house is just across the road from Wright’s Hillside School building.